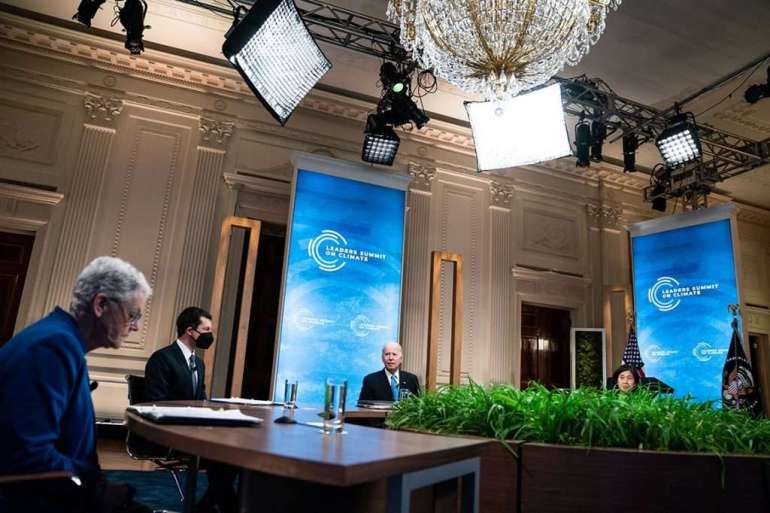 “That’s a big deal that it was leader-led this early in the new administration. That’s a good indication of commitment,” said Jim Connaughton, who led President George W. Bush’s Council on Environmental Quality, even if the pledges that emerged didn’t significantly advance the fight against climate change.

The U.S. summit is just one event in a crowded calendar leading to November’s climate talks in Glasgow, Scotland, where other nations are expected to increase their climate targets in hopes of keeping their goal — preventing temperatures from rising 1.5 degrees Celsius — within reach.

Here’s what we learned from the summit, and what’s next on the path to Glasgow:

The U.S. is back, but is it serious this time?

The world said it would forge ahead on climate even as the United States antagonized global efforts under former President Donald Trump.

It turns out the U.S. does matter. The Biden-led summit underscored the value of America’s convening power on matters of international import — a concept at odds with the isolationist Trump.

Through diplomacy and its geopolitical might, the stage Biden created led to new commitments from major economies like Canada, Japan and South Korea. That doesn’t happen without Biden using the bully pulpit of the presidency of the world’s largest economy — one that accounts for 13 percent of global emissions.

Combined, the announcements at the summit closed the gap between projected emissions in 2030 and what’s needed to hold warming at 1.5C by about 1 percent, according to preliminary data shared with POLITICO by Climate Action Tracker. With the U.S. pledge, that rises to 9 percent.

All he can control is his executive branch — which he’s stacked with a who’s who of climate leaders — and he served notice to the world this week that he intends to transform his entire government into an emissions-cutting machine.

In Washington, saying you want to do something is always easier than doing it. But it still means something when a president says something on the global stage, and Biden could not have said with any more clarity in front of a more relevant audience that he wants to accelerate the transition to clean energy. Now he just has to try to do it.

The China problem isn’t going away

Relations between the U.S. and China are at a low point on many issues, and while the two countries have recently reaffirmed their desire to work together to confront climate change, there’s little evidence that Beijing will budge for Biden or his climate envoy, John Kerry.

“I think it’s going to be difficult for the administration to get any sort of concession from China beyond what they’ve already said, even in coordination with allies,” said George David Banks, the Trump administration’s first international climate adviser and a supporter of the Paris agreement.

Kerry made a last minute dash to Shanghai last week, winning confirmation that Premier Xi Jinping would at least attend the virtual event, but in the end the Chinese leader only offered to begin to wean his country off coal starting in the second half of the decade. That modest promise is far short of the calls that China should move up its target to reach carbon neutrality from 2060, and Xi’s comments that China should be treated like a developing nation — rather than as the world’s top greenhouse gas emitter — indicated it planned to give little ground.

“What you got from Xi Jinping is, ‘Let me tell you all about a 1992 treaty that still defines China as a developing country,'” said one administration official who asked for anonymity because they were not authorized to speak with the press.

China insists it’s taking action aggressive action, but that it’s starting from a disadvantaged position as compared to Western countries. “China has committed to move from carbon peak to carbon neutrality in a much shorter time span than what might take many developed countries, and that requires extraordinary hard efforts from China,” Xi said.

The U.S. and China might have agreed to work together to solve the problem, but that’s about as far as they’ve gotten.

While the rest of the world dithers over climate targets, bureaucrats in the European Union are quietly preparing to roll out a plan in June to tax carbon intensive imports and discourage its industries from seeking less regulated environs.

The levy, which will be linked to Europe’s carbon price, is geopolitically explosive. On a call with his German and French counterparts last week, Xi slammed the idea. There have been some suggestions that Canada, Japan, the U.K. and others might join the EU in a “carbon club”. The U.S. is vaguely considering such a scheme. But Kerry has urged the EU to put its plan on ice.

Europe however is adamant it will plow on alone and the more summits that end in blah climate announcements, the more likely it becomes they will try to wield the power of the largest single market on earth.

“Preferably, if every country would fulfill its Paris commitments, it would never have to be used,” said European Commission Executive Vice President Frans Timmermans told the House Foreign Affairs Subcommittee for Europe, Energy, the Environment and Cyber on Tuesday.

Climate talk is cheap, but tech is action

Climate diplomacy is how nations discuss how to cut greenhouse-gas emissions. Climate technology is how emissions actually get cut. So it was significant that the second day of Biden’s summit was dedicated to innovation, because the first-day pledges for emissions reductions won’t come true without cost-effective emissions-reducing technologies.

“No politician, no matter how demagogic or potent or capable they are, is going to be able to change what the market is doing,” Kerry told the event.

Biden and other world leaders know that to achieve their climate goals, they have to sell people on the bright economic opportunities to come. Companies and other governments eagerly amplified the message, with influential German manufacturing lobby VDMA saying the U.S. was “a new competitor … entering the global market of climate technologies with full force.”

And the Biden Administration’s main message was that governments can help drive those breakthroughs and shape the direction of the market by investing in research and development. The U.S. government has done it before, helping to finance innovations that have driven the fracking revolution, the solar revolution, and the plunging costs of LED lighting and lithium-ion batteries. Biden’s energy secretary, Jennifer Granholm, declared at the summit that clean tech would be “our generation’s moonshot” — and the moonshot was a government operation.

Granholm announced a U.S. partnership with several oil-producing nations to work on emissions-reducing strategies, as well as a partnership with Denmark to eliminate emissions from global shipping. Even Russian President Vladimir Putin called for international cooperation on carbon removal technologies

Kalina Oroschakoff contributed to this report