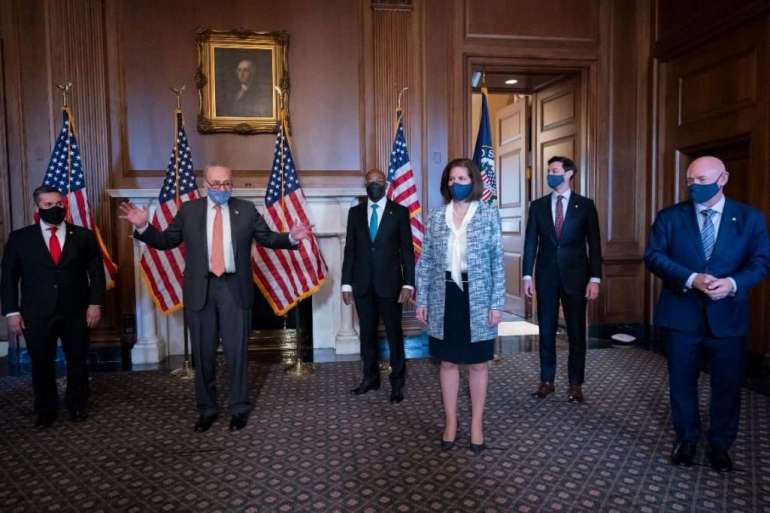 “You couldn’t have a better test” of GOP viability than Kelly and Warnock’s races, said Sen. Mike Braun (R-Ind.), who fretted that Georgia and Arizona soon could start resembling Democratic strongholds like New Mexico and Colorado as the states’ demographics change. “You scratch your head about how we’re going to overcome that in the long run.”

It’s the most diverse freshman class in the history of Congress. It’s also a group of lawmakers whose time in Washington has been marked by insurrection and hyper-polarization.

Historically, the party in power takes big losses during its first midterm after a presidential election. But Democrats are defending incumbents in states that Biden won, including Georgia and Arizona, and already feeling good about Warnock and Kelly’s chances.

“They’re aware the norm would be that a presidential midterm might create a headwind blowing in the face of the party that just won the presidency,” said Sen. Tim Kaine (D-Va.). But he predicted that 2022 could look different for his colleagues: “You might see Warnock and Kelly running with a tailwind rather than a headwind.”

The pair is already looking like sturdy incumbents, raising money at eye-popping rates and avoiding top-tier challengers early on. Former Rep. Doug Collins (R-Ga.) on Monday became the latest to turn down the chance to take on Warnock, and Arizona Gov. Doug Ducey (R) publicly said he won’t run against Kelly.

Republican senators said in interviews that their task now is landing someone to compete with well-funded senators who could see their fortunes soar along with the economy. John Watson, the former GOP chair in Georgia, said that “it’s crazy we don’t have a top-shelf candidate right now” to challenge Warnock.

If Republicans “can consolidate behind somebody that’s electable, then I think those races are very competitive and we have a good shot,” said Sen. John Thune (R-S.D.), the minority whip. “If we don’t do it right, then it’s a whole other shooting match.”

Both senators raised more than $4.4 million in the first quarter of this year; Kelly has nearly that amount in the bank, and Warnock has more than $5.6 million — both huge numbers this far out from the 2022 election. They became two of the most prolific small-dollar fundraisers in their party last cycle, and those donors are already getting courted by their campaigns.

Mike Nellis, CEO of Authentic and a digital consultant, compared Warnock and Kelly’s fundraising programs to those of presidential candidates.

“You normally see a sizable drop-off in grassroots donations after you win. But the back-to-back elections and the unique national attention both have received are huge advantages for online fundraising,” Nellis said.

Other than their prodigious fundraising, Kelly and Warnock have navigated their first few months in Washington using disparate routes. Kelly has joined a bipartisan negotiating group and will often bring up the late Sen. John McCain (R-Ariz.) when talking about the importance of his work.

Rather than run to the middle, Warnock is embracing a progressive agenda. He’s particularly eager to pass voting rights legislation and prepared to taunt the GOP for its opposition.

“That they’re digging their heels in on voter suppression, more than anything else, shows that they understand how much trouble they’re in,” Warnock said of Republicans.

The GOP is still trying to recruit Ducey to take on Kelly, amid fears within the party that a Trump-aligned candidate could blow a winnable race. Mark Brnovich, the state attorney general, is seriously considering a bid, according to a GOP operative familiar with his thinking. In addition, Peter Thiel invested $10 million in a super PAC to back Blake Masters, the chief operating officer of his firm Thiel Capital.

Kelly declined to criticize the reeling Arizona GOP and said he has a “good relationship” with Ducey, dubbed “the second worst Republican governor in America” by former President Donald Trump. Sen. John Cornyn (R-Texas), who met recently with Ducey, said “he’s gone from no to ‘well, I’ll listen.’ It made me more hopeful.” Kelly predicted he “will have an opponent that will work hard and will be well-funded.”

Previewing how the GOP will work to blunt the two senators, Sen. Rick Scott (R-Fla.) attacked their voting record on budget amendments last month. No matter the state of the economy, Republicans will cast Warnock and Kelly as outliers in their states who vote party-line when it counts.

Referring to a budget amendment on eligibility for coronavirus aid checks, he argued Warnock “voted to give stimulus checks to rapists, pedophiles and murderers. If I was running a campaign … those are the things I’d talk about.”

Kelly and Warnock downplayed their focus on their reelection races in interviews. But Democratic leaders see that their campaigns never really stopped after Kelly won in November and Warnock triumphed two months later. Now they face another fight for full six-year terms.

Sen. Kyrsten Sinema (D-Ariz.) offered some advice, saying that the way to win in her state is “you show up to work, you work really hard and you make sure Arizonans know that come election time.”

It’s a remarkable sprint for the duo in states that a decade ago were considered Republican strongholds. Sen. Gary Peters (D-Mich.), his party’s new campaign chief, acknowledged that running back-to-back tough elections “is not great for them as individuals” but makes them all the more strong next November.

“They’ve demonstrated that they know how to win. And if you look at the Republican side, they continue to have the Republican civil war,” Peters said. “We’re not defending tough turf. We’re defending turf that we know will vote Democratic.”

But Republicans are counting on a snapback. While both states have elected two Democratic senators and backed Biden, those string of victories all came while Trump was in office. Watson, the former Georgia GOP chair, said the race is winnable for his party in a “drama-less environment” but that Warnock has a “really good chance” if there’s more GOP infighting.

“Warnock is a likable guy, and he’s going to have plenty of money. He’s also a prodigious campaigner,” said former Rep. Jack Kingston of Georgia, who lost a Senate primary in 2014. “However, the wave is going to be against the party in the White House.”