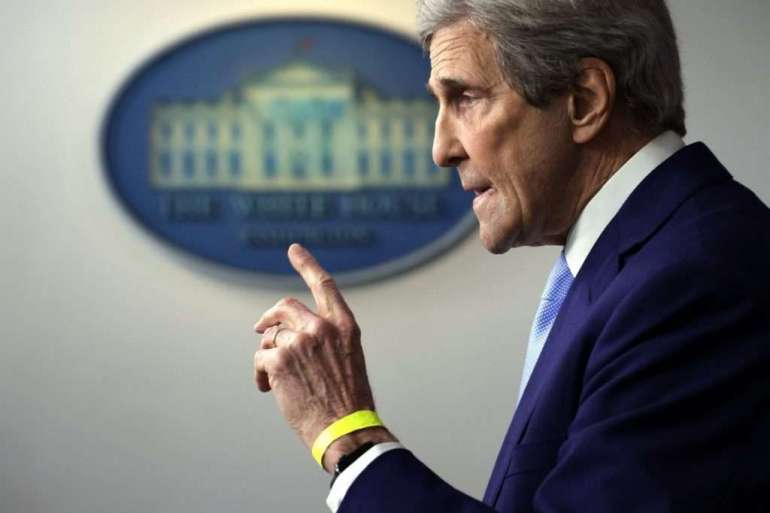 Sullivan tore into Kerry in an earlier speech on the Senate floor, knocking him for “arrogantly killing American jobs … in the name of climate goals,” and saying it was his first time calling for a resignation. Other GOP lawmakers quickly followed suit.

“It’s unfathomable that any U.S. diplomat, past or present, would leak intelligence to the world’s leading sponsors of terrorism at the expense of one of our staunchest allies,” added Wisconsin Rep. Mike Gallagher, a rising-star Republican on national security issues.

Kerry — the former secretary of state, Massachusetts senator and Democratic presidential nominee — serves as Biden’s climate envoy on the NSC and was a chief negotiator of the 2015 Iran nuclear deal. His role in that accord has drawn him scorn from Republicans and some more hawkish Democrats.

Importantly, Zarif’s version of events has not been independently corroborated. His remarks to an Iranian academic were leaked by a London-based media outlet. It is also unclear whether Kerry allegedly revealed the Israeli operations to Zarif before they were publicly reported by Israel itself in 2018.

Kerry denied Zarif’s account in a tweet later Monday, writing: “I can tell you that this story and these allegations are unequivocally false. This never happened — either when I was Secretary of State or since.”

“I don’t know if we should trust that tape or not. If it’s true, it’s very damaging,” Graham said. “I like John Kerry, but that would not be helpful and it would be very problematic if it were true. But let’s wait and see how authentic this is.”

Ahead of his tweet, Republicans urged Kerry to address the incendiary allegation.

“It’s very troubling, and there needs to be full transparency to understand exactly what was done, by whom, for what purpose, and an accounting of what occurred,” said Sen. Mitt Romney (R-Utah), a member of the Foreign Relations Committee. “We have one recording by an Iranian official, but this is something that has to be evaluated and looked into.”

Sen. Rick Scott (R-Fla.), the chair of the Senate GOP campaign arm, said Biden should revoke Kerry’s access to classified information while the matter is looked into.

The episode comes as the Biden administration is trying to resurrect the nuclear deal, which Republicans uniformly opposed. Former President Donald Trump pulled the U.S. out of the agreement in 2018.

Republicans have criticized Biden’s nuclear diplomacy and urged him not to lift harsh U.S. sanctions on the Iranian regime, many of which were re-imposed under Trump. Elsewhere in the leaked audio, Zarif said his country is effectively run by the Islamic Revolutionary Guard Corps, the most powerful branch of Iran’s military.

Senate Minority Leader Mitch McConnell said Zarif’s remarks underscore why the U.S. should not abandon its sanctions on Iran.

“We know that preemptive concessions will not secure a better deal, or make America or our allies more secure,” McConnell said on Monday.

If Zarif’s accounting is accurate, it would not be the first time that a top American official revealed classified information to a foreign adversary. In 2017, Trump reportedly discussed Israeli intelligence information during an Oval Office meeting with top Russian officials.