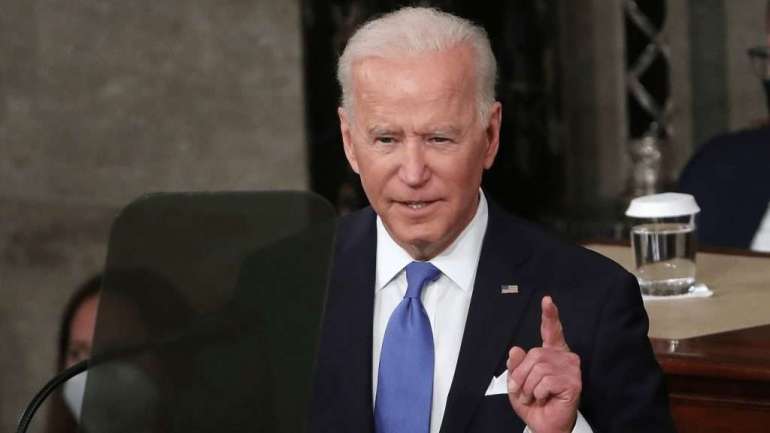 The speech marked an early victory lap for a White House fashioning itself as having one of the most consequential starts to a presidency in American history. It is also an opportunity to build momentum for two proposals — the American Jobs Plan and the American Families Plan — that, if enacted, would alter the course of the country for decades to come.

Biden is framing the spending blueprints, which carry a combined price tag of about $4 trillion over the next decade, as a necessary corrective in order to rebuild the foundation of the middle class and society writ large at a time when trust in government is on the wane.

“We have to prove democracy still works — that our government still works and can deliver for the people,” he said.

The president’s speech focused on his first 100 days in office, including the progress the country has made in vaccinating residents against the coronavirus, and it will outline his multitrillion-dollar infrastructure and social welfare proposals.

Biden is attempting to enact a generation-defining agenda at a time when Democrats hold all the levers of power in Washington, albeit by the narrowest of margins.

“In our first 100 days together, we have acted to restore the people’s faith in our democracy to deliver,” Biden said.

Biden has courted bipartisan support from congressional Republicans, but has also shown a willingness to push ahead with solely Democratic votes if need be as part of a gamble, with the House and Senate majorities on the line next year, that flies in the face of Washington orthodoxy.

Wednesday night’s speech, which is not technically considered a State of the Union address, was a departure from the typical pomp associated with the event due to pandemic-related restrictions. Biden spoke before just a fraction of the congressional representatives, government dignitaries and guests who typically attend such an address, due to the restrictions imposed as a result of the coronavirus pandemic, which has killed roughly 575,000 Americans to date.

“While the setting tonight is familiar, this gathering is just a little bit different, and it’s a reminder of the extraordinary times were in,” he said.

Only about 200 tickets were parceled out, and even mainstays like most of the Supreme Court and the president’s Cabinet were not in attendance. (As such, it obviated the need for an off-site “designated survivor” in the event of a disaster at the event.)

The clapping, standing ovations and — most notably — jeering were somewhat subdued, an inevitable consequence of the limited in-person audience. And the event stood in stark contrast to President Donald Trump’s final State of the Union address in February 2020, which was remembered for Trump’s not shaking Speaker Nancy Pelosi’s hand and the Democratic leader performatively ripping up a printed copy of his speech.

That event took place at a time when few — in America and on Capitol Hill — understood the true gravity of the threat posed by Covid-19, and Washington’s attention was on Trump’s first impeachment trial.

The public health crisis has defined Biden’s first 100 days in office and will continue to be a concern for the foreseeable future, though the White House has begun to look over the horizon as it contemplates the next leg of the president’s term.

More than 200 million vaccines have been administered since Biden took office, twice the number he and his team set at the outset of their arrival for the administration’s first 100 days.

However, tens of millions of people across the country still have yet to receive a dose, and many Americans either remain ineligible — as all but the oldest children are — or are among those averse to taking the vaccine.

The Biden administration is also grappling with the growing issue of how and when to share the nation’s vaccine supply with other countries, a decision that global health experts say will be crucial to bringing the pandemic to a close and warding off the risk of additional viral variants.

The issue has become one of the first major fissures within the White House, in part because of ongoing snafus that have bedeviled the single-shot vaccine developed by Johnson & Johnson.

And while Biden has largely steered clear of major pitfalls early in his term, his administration continues to grapple with an influx of migrants arriving along the country’s border with Mexico, a situation that is taxing valuable energy and attention at several agencies.

In his speech  Biden also focused on adversaries China and Russia and called out their leaders — Xi Jinping and Russian President Vladimir Putin, respectively — by naming them multiple times and linking his domestic policy agenda to the United States’ ability to counter them.

“We’re in competition with China and other countries to win the 21st century,” Biden said. “That’s why I proposed the American Jobs Plan, a once-in-a-generation investment in America itself.”

Biden’s approval rating to date has steadily hovered a notch above 50 percent in public surveys, besting Trump’s numbers in his first months, though lower than those of Biden’s Democratic predecessor, President Barack Obama, at the beginning of his eight years in office.

Biden had attended dozens of these joint addresses, first as a senator and then as vice president, but Wednesday’s speech was the first time he was at the lectern emblazoned with the presidential seal he long envisioned himself behind.

“It’s good to be almost home,” he said after walking down the aisle and fist-bumping the scattered members of Congress lining the way to greet him.

It was also the first time that a president giving a joint address to Congress has shared the dais with two women: Vice President Kamala Harris and House Speaker Nancy Pelosi.

After Wednesday night, the focus will again shift back to Congress as it mulls what, if anything, in Biden’s sweeping infrastructure and social welfare proposals will make it into law.

Republicans have already balked at several of the items in Biden’s Jobs Plan, and a band of prospective dealmakers has offered an alternative that totals about one-third of Biden’s more than $2 trillion infrastructure package.

The American Families Plan also includes hundreds of billions for things likely to raise conservative hackles, such as free universal preschool, Obamacare premium subsidies and an extension of the enhanced child tax credit enacted as part of this year’s coronavirus relief package. All of it will be paid for by raising taxes on high earners and capital gains, as well as bolstering tax enforcement.

The Biden administration has been stepping up outreach to GOP members of Congress in hopes of garnering some support for the efforts. White House press secretary Jen Psaki said on Wednesday that the president was planning to invite some Republicans to the White House next week to discuss his proposals.

The White House made similar entreaties earlier this year during negotiations over the $1.9 trillion relief package, which ultimately passed under budget reconciliation rules along partisan lines.

But Biden’s designs also face headwinds from members of his own party for what was left out — big-ticket health care reforms such as drug-pricing controls or expansions of programs like Medicare and Medicaid.

Doing so allows Biden to sidestep surefire opposition from the powerful pharmaceutical and health insurance industries, but risks infuriating progressives who remain key to his agenda, given Democrats’ hair-thin congressional majorities.

And while it’s not a part of his two wide-ranging proposals, Biden did raise the issue during his address. And it garnered the only reference to Trump in the more than 6,000-word speech as a way to signal the widespread support for lowering drug prices, though Biden did not mention the former president by name and the line was not in his prepared remarks.

“Let’s lower prescription drug costs,” he said. “The last president has this as an objective. We all know how outrageously expensive drugs are in America.”

Biden also reiterated his support for major policing reform and enhanced gun control legislation, two issues that have long been bottled up in Congress in large part due to Republican opposition.

“We have a giant opportunity to bend the arc of the moral universe toward justice, real justice,” Biden said of a bill named in honor of George Floyd, the Black Minnesota man who was murdered last year by a Minneapolis police officer. “And with the plans outlined tonight, we have a real chance to root out systemic racism that plagues America.”

During his speech, which lasted a little over an hour, Biden was careful to not demonize Republicans and rarely even criticized them, with gun control being the major exception. And the president offered occasional glimpses of humility, a noticeable stylistic departure from his braggadocios predecessor, including closing with an acknowledgment of the length of his address.

“Thank you for your patience.”