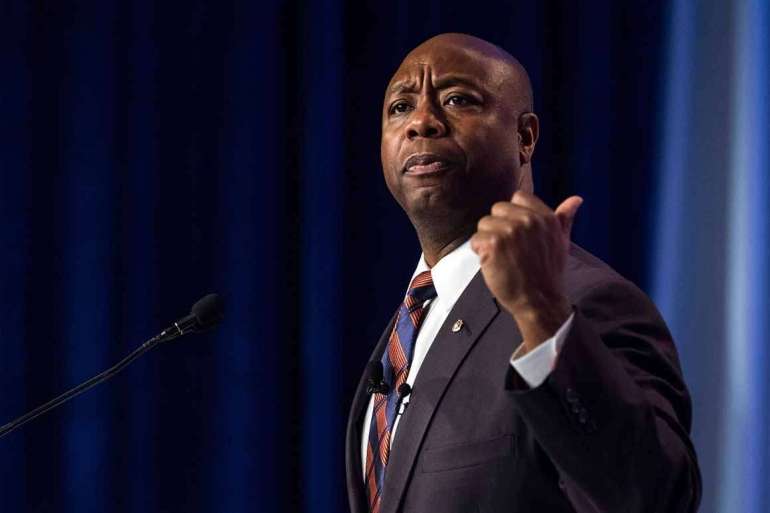 Scott, the GOP’s lone Black senator, has been in discussions with Rep. Karen Bass (D-Calif.) and other Democrats about the prospects for a bipartisan deal on police reform legislation, an issue that continues to be a perilous one in Congress. Scott and Bass are scheduled to meet on Thursday to negotiate on the issue with Sens. Dick Durbin (D-Ill.), Cory Booker (D-N.J.) and Lindsey Graham (R-S.C.).

Bass, who has been deputized by House Speaker Nancy Pelosi to negotiate on police reform on behalf of House Democrats, sponsors a bill named after Floyd that passed the House on a near-party line vote. Scott has backed an alternative measure that Senate Democrats blocked last year, arguing that it did not do enough to reform policing in the U.S.

Scott on Wednesday offered a rebuttal of the way that Democrats talk about race and their differing view on its centrality to minorities’ present-day experience in the United States.

“America is not a racist country” he said at one point, adding that “race is not a political weapon to settle every issue the way one side wants.”

Scott said the way to improve relations between police officers and communities of color in the U.S. is not by demonizing law enforcement.

“I won’t cross that line,” he said. “It’s is a line that is bad for the community and bad for the officers.”

Scott also said he was stung by social media reaction to his speech Wednesday night calling him “Uncle Tim” — a variation of the insult for Black people perceived as sidling up to white people of power — and other slurs. He said it underscored the hypocritical way that some on the political left wield race as a cudgel against Republicans.

“What they want for us is to stay in a little small corner and not go against the tide that they think is America,” he said.