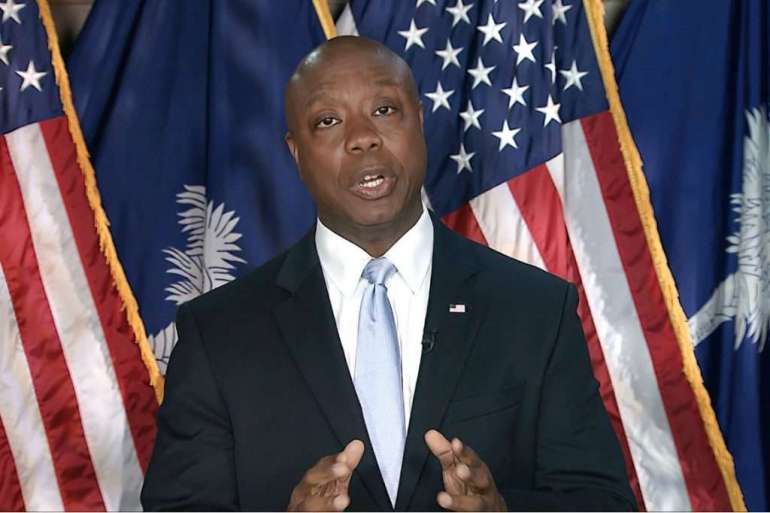 But while Biden used his first speech to Congress to urge passage of a policing bill by late May, Scott used his GOP rebuttal to highlight what he views as a Democratic derailment of his plan — a reminder of the cross-aisle tensions that still exist on the fraught issue.

“I extended an olive branch. I offered amendments. But Democrats used the filibuster to block the debate from even happening,” Scott said in his speech, which quickly fueled talk of a 2024 presidential run.

Asked about Biden’s timeline on Thursday, Scott wouldn’t commit to the specific date: “I didn’t set the May 25 deadline. I think the best thing we can do is keep in mind what we’re doing.”

Democratic leaders have also not set a formal deadline. Speaker Nancy Pelosi told reporters Thursday that a “good, strong bipartisan bill” will come to the floor “when we are ready.”

However, a smaller group, including Bass, Scott and some members of the House’s bipartisan Problem Solvers Caucus, continued to talk through the 2020 election. Bass and Scott are now set to try again, this time with Biden in charge.

They’re finding that many of the same policy issues which tripped up talks last spring remain high hurdles. Democrats still say Scott’s bill last year was largely toothless, and that his proposal for federal incentives rather than strict new rules wouldn’t do enough to change the culture of police departments across the country.

Republicans, on the other hand, oppose provisions that would lower the legal barriers to suing or prosecuting police officers — a major demand of civil rights advocates.

Following Thursday’s meeting, Scott reiterated he opposed lowering the bar for prosecuting police officers by changing federal laws on police misconduct. Graham agreed that resolving the cross-aisle differences on that front was “gonna be a challenge.”

Durbin said lawmakers had a “positive spirit” in the room but still were confronting a number of divisive questions. That includes restrictions on transfers of military hardware to law enforcement, federal restrictions on chokeholds and no-knock warrants, according to a source familiar with the negotiations. Another roadblock involves the legal doctrine known as qualified immunity, which shields police from lawsuits by victims or their families for alleged civil rights violations.

Sen. Sheldon Whitehouse (D-R.I.) has floated a compromise that resembles Scott’s proposal to place financial liability for civil rights infringement on police departments, rather than officers. Whitehouse said Thursday it would protect “police officers from personal liability — the ‘one bad night concern’ — that so many of our colleagues have expressed.”

Asked about Whitehouse’s proposal, Graham lauded it and said it “takes a lot of pressure off cops.” But negotiators haven’t shared specific language on it, clouding how much it would change current law.

It is also unclear if such a qualified immunity compromise would pass muster with civil rights activists who want to hold individual officers liable, decrying the rarity of disciplinary action or successful lawsuits against officers.

The meetings between lawmakers and the relatives of George Floyd, Eric Garner, Botham Jean, and Terence Crutcher came a day after Biden’s call on Congress to pass police reform within weeks.