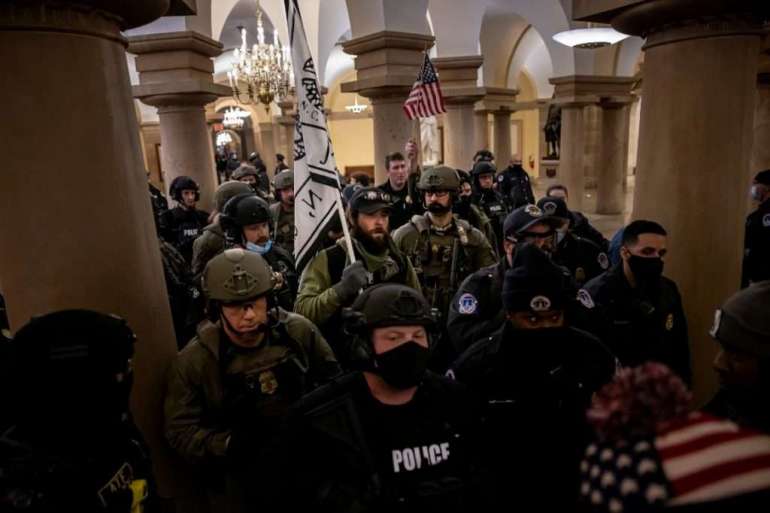 The details about Waldow’s transmission come as congressional investigators seek to understand the security lapses that allowed the Jan. 6 riot to spiral out of control — sending lawmakers and then-Vice President Mike Pence fleeing for safety, resulting in more than 130 injuries to Capitol and D.C. police, and inflicting a deep wound upon the perception of America’s peaceful transfer of power. The department’s internal watchdog, Inspector General Michael Bolton, has also indicated he intends to review radio communications from that day.

Bolton has already issued scathing findings about the department’s handling of prior intelligence suggesting that Donald Trump backers — whipped into a frenzy by the outgoing president as he encouraged them to march on Congress and stop what he falsely called a “rigged” 2020 election — might pose a threat to the Capitol.

Amid the fallout, multiple congressional and Capitol Police sources told POLITICO that a key intelligence official inside the department, Jack Donohue, has resigned.

Donohue, who joined the department last year after a 32-year career with the NYPD, left for “personal reasons,” a Capitol Police official told POLITICO on Friday.

Donohue reportedly delivered a memo to Capitol Police leaders on Jan. 3 describing the prospect of fierce violence aimed at Congress by Trump supporters who viewed Jan. 6 as their last chance to overturn the election results. Steven Sund, who resigned as Capitol Police chief after the Jan. 6 attack, later told Congress he had not seen Donahue’s memo and that it appeared never to have reached senior Capitol Police leaders.

“I’ve been told it went over to an official with the rank of sergeant and didn’t move any farther from there,” Sund said in his Feb. 23 testimony.

House Democrats worry that Waldow’s radio communication suggests that officers were still focused on potential street-level skirmishes between Trump allies and anti-Trump protesters, even as the threat to lawmakers and officers grew more acute.

Capitol Police leaders have largely defended their actions and preparation for Jan. 6, despite acknowledging failures that led to disastrous results. Sund and his successor, acting Chief Yogananda Pittman, have said the intelligence never conveyed the possibility of a mob attack that would threaten the Capitol itself. They noted that the Secret Service still sent Pence to the Capitol that day, suggesting that the Secret Service never would have done so had the threat of an attempted insurrection been substantiated.

But rank-and-file officers have been furious at their leadership since the attack occurred, many saying they felt woefully underprepared for the vicious assault they faced. The department’s union delivered resounding votes of no confidence to Pittman and other Capitol Police leaders in February. Waldow fared better than most, earning 64 percent disapproval.

Rep. Zoe Lofgren (D-Calif.) first revealed Waldow’s radio communication — without naming him — during a hearing last week in which she raised concerns that the Capitol Police leadership appeared, on the morning of Jan. 6, to be focused on anti-Trump protesters rather than the concerted attack on the Capitol that was about to unfold. Although Lofgren initially indicated that the radio transmission suggested officers should only focus on anti-Trump figures, the transcript of the transmission is more nuanced.

“With regards to pedestrian traffic on — on the grounds today, we anticipate a — a large presence for pro-Trump participants,” Waldow radioed fellow officers, according to the transcript of the directive. “What we’re looking for is any anti-Trump counter protesters.”

After Lofgren revealed Waldow’s directive, the Capitol Police pushed back publicly, releasing the verbatim text of the transmission and suggesting Lofgren had taken it out of context. The department said Waldow’s remark was meant to suggest officers should be mindful that anti-Trump protesters in the crowd were likely to create hotspots for potential altercations with Trump-allied marchers — a dynamic that had played out in previous protests.

“The radio call does not mean USCP was only looking out for anti-Trump counter protesters,” the department said in the statement. “The next radio transmission requests that officers be on the lookout for a pro-Trump protester carrying a possible weapon.”

Waldow’s radio transmission isn’t the only aspect of his Jan. 6 actions under scrutiny. His decision to wade into the crowd of extremists as the fighting intensified — a decision that earned him plaudits from some fellow officers — nevertheless disrupted communications for the officers on the ground, since he was their primary coordinator. Rank-and-file officers have complained that no other leaders stepped in to help coordinate while Waldow was engaged in the fighting.

Without identifying Waldow, Pittman addressed this communications breakdown broadly during testimony to the House Appropriations Committee in February, acknowledging that “incident command protocols were not adhered to.”

“The persons in charge of our Civil Disturbance Unit as well as those operational commanders that are in charge of the Capitol are responsible for that implementation of that incident command system,” Pittman said, “so when there’s a breakdown, you look for those commanders with boots on the ground to provide that instruction. That did not happen primarily because those operational commanders, at the time, were so overwhelmed, they started to participate and assist the officers with boots on the ground, versus providing that guidance and direction.”

Rep. Jaime Herrera Beutler (R-Wash.) pushed back on Pittman, wondering why the Capitol Police’s upper leadership, stationed in the command center, didn’t step in to “regain control” once the communications broke down. She asked if Pittman believed those commanders on the ground were responsible for the breakdown.

“I think it’s a multi-tiered failure, if you will,” Pittman replied.

Jan. 6 wasn’t the first time Waldow’s conduct has been under scrutiny. He was also at the center of a controversy surrounding the firing of a Capitol Police officer who had complained of sexual harassment by a superior. Waldow, then an inspector, recommended firing the officer, Chrisavgi Sourgoutsis, and later acknowledged that he breached the department’s protocol by failing to meet with her or her supervisors before issuing his recommendation.