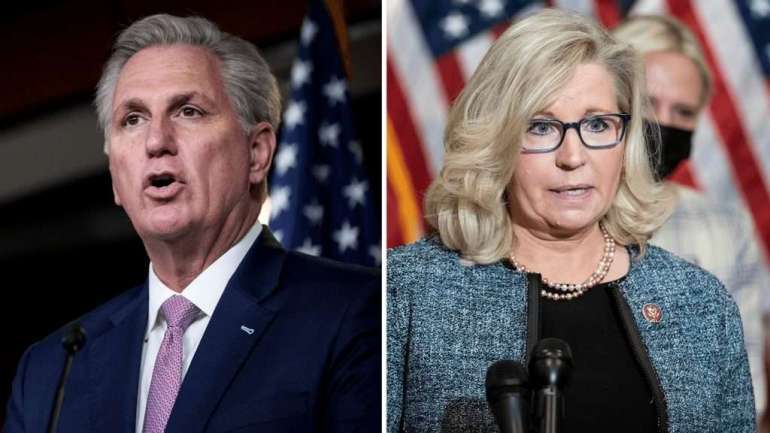 McCarthy’s moves are a stark shift from his public silence earlier this year when House conservatives mounted a failed bid to dislodge Cheney from her role after she voted to impeach former President Donald Trump for inciting the Jan. 6 Capitol insurrection.

This time, McCarthy denied that intra-party frustrations with Cheney were rooted in the Wyoming Republican’s impeachment vote. Cheney’s GOP critics say they’re frustrated that she hasn’t acted like a team player, doesn’t stay on-message and has created an unwelcome distraction with recent headline-making comments about Trump.

“There’s no concern about how she voted on impeachment. That decision has been made,” McCarthy told “Fox & Friends” in an interview.

Responding to McCarthy’s remarks, Cheney spokesperson Jeremy Adler released a statement later Tuesday morning framing the fight this way: “This is about whether the Republican Party is going to perpetuate lies about the 2020 election and attempt to whitewash what happened on Jan 6. Liz will not do that. That is the issue.”

McCarthy was also caught trashing Cheney on a hot mic Tuesday, saying he’s “lost confidence” in his top deputy and that she has “real problems,” according to Axios.

While tension between the top House Republican leaders has been steadily escalating, the relationship between the conference’s No. 1 and No. 3 hit rock bottom after its annual policy retreat in Florida last week, an event designed to project a united front as Republicans look to take back the House. The conversation among senior Republicans now isn’t whether Cheney survives another vote on her future, but who will inevitably replace her.

Members of McCarthy’s leadership team have begun whipping people against Cheney, according to one House Republican.

A handful of names have been floated to succeed Cheney, but Stefanik — who propelled herself to GOP stardom during Trump’s first impeachment trial — has emerged as a clear frontrunner, according to multiple senior Republicans and sources close to leadership. Leadership allies are essentially trying to sell Republicans on a replacement plan: swap Cheney for Stefanik.

Stefanik, 36, is said to be interested in the job if Cheney gets the boot and has been calling her colleagues to talk about her interest in the job and garner support, though her supporters believe she’s wary of looking eager to knife Cheney.

Stefanik, who mulled a bid for New York governor this year, has a number of things going for her: She’s become a prolific and high-profile fundraiser, is considered an effective party messenger and launched a PAC dedicated to electing more Republican women. She’s also liked by the MAGA crowd, including Trump and McCarthy. But Stefanik’s PAC has required her to play in GOP primaries, which could be problematic if she winds up in leadership.

Some have also questioned her conservative credentials, noting that Stefanik was a former co-chair of the moderate Tuesday Group who boasts only a 48 percent lifetime score from the conservative group Heritage Action. By comparison, Cheney’s is 80 percent. Stefanik’s upstate New York district, however, has grown redder in recent years.

Rep. Guy Reschenthaler (R-Pa.) said Stefanik has his support following Cheney’s repeated criticisms of the party over Jan. 6. He lauded Stefanik’s fundraising prowess, her efforts to recruit women and her political instincts.

“I whipped votes actively for Liz Cheney the last time she was in a situation. I’m not doing it this time because I feel that there was an opportunity to pivot and move past the differences that we had as a conference, but every single interview, every single tweet just rehashes past issues,” Reschenthaler told POLITICO.

“That’s why I’m actively behind Elise and pushing for a change in that position. We just simply are not going to move forward as a conference if we have somebody that is constantly looking in the rear view mirror,” he added.

Rep. Jim Jordan of Ohio, a McCarthy ally and co-founder of the ultra-conservative Freedom Caucus, also lent his voice to Stefanik’s growing chorus of support during an interview on Fox News.

Republicans are well aware of the optics of booting the sole woman to serve in GOP leadership, with some stressing the importance of finding another woman to take Cheney’s place. Rep. Jackie Walorski of Indiana is another Republican whose name has been floated, but she is generally not viewed as strong of a contender as Stefanik.

Before the growing support for Stefanik became clear, other male GOP members were seen as possible contenders for the Conference chair. Rep. Jim Banks of Indiana, chair of the Republican Study Committee, signaled an interest in the role, but as momentum began to build for Stefanik on Tuesday, Banks told The Hill he will not run to replace Cheney. Some have also pointed to Rep. Mike Johnson of Louisiana, who occupies the No. 4 slot as vice conference chair.

The discussions about who will replace her indicate that a vote on Cheney’s future is unavoidable, barely three months after she cruised to victory after the first attempt to oust her from leadership by House conservatives.

House Republicans will huddle next Wednesday for their weekly conference meeting, where McCarthy can call for a vote on Cheney’s future. If the GOP conference does purge Cheney from their ranks, they’d have to hold another vote on her replacement.

While the timing of those votes is up in the air, Republicans are predicting that the process will move quickly, with many eager to rip the Band-Aid off. Others, however, are warning against a snap decision.

McCarthy defended Cheney privately during February’s vote over whether to keep her in leadership. But their relationship has since soured as McCarthy has sought to walk back his criticisms of Trump and tether himself more closely to the former president — all while Cheney has continued to insist Trump should play no role in the future of the Republican Party.

Conservatives including Donald Trump Jr. attacked Cheney last week for fist-bumping President Joe Biden ahead of his first address to a joint session of Congress, and the Republican infighting ramped up further on Monday after former President Trump released a statement attempting to rebrand the 2020 election as the real “BIG LIE.”

Cheney responded on Twitter roughly an hour later, writing: “The 2020 presidential election was not stolen. Anyone who claims it was is spreading THE BIG LIE, turning their back on the rule of law, and poisoning our democratic system.”

The back-and-forth between the former president and the GOP conference chair provoked another round of backlash from conservatives and fueled already rampant speculation that Cheney could soon be booted from House leadership.

“Liz Cheney was put on notice when our conference held a vote to remove her in February. Her role is to lead House Republican messaging, but she is totally unaligned with the majority of our party,” Rep. Lance Gooden (R-Texas) said in a statement Tuesday. “We cannot fight for the America First agenda with her in a leadership position.”

Cheney, for her part, rebuked Trump again on Monday night at a closed-door conference in Georgia, where CNN reported she called Trump’s false election fraud claims “a poison in the bloodstream of our democracy” and said that “we can’t whitewash what happened” on Jan. 6.

“Every person of conscience draws a line beyond which they will not go: Liz Cheney refuses to lie,” tweeted Sen. Mitt Romney (R-Utah), who has voted twice to remove Trump from office. “As one of my Republican Senate colleagues said to me following my impeachment vote: ‘I wouldn’t want to be a member of a group that punished someone for following their conscience.'”