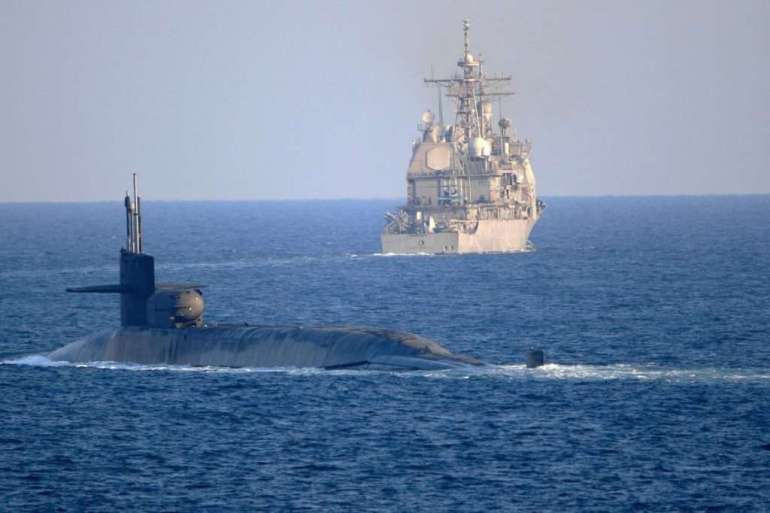 “Sadly, harassment by the IRGC Navy is not a new phenomenon. It is something that all of our commanding officers and the crews of our vessels are trained to for,” Kirby said. “This activity is the kind of activity that could lead to somebody getting hurt and could lead to a real miscalculation there in the region, and that doesn’t serve anybody’s interests.”

On April 26, an American warship fired warning shots when vessels of Iran’s Revolutionary Guard came too close to a patrol in the Persian Gulf. That was the first such shooting in nearly four years. The Navy released black-and-white footage of that encounter in international waters of the northern reaches of the Persian Gulf near Kuwait, Iran, Iraq and Saudi Arabia.

In the latest incident, Kirby said Iranian vessels maneuvered at high speed toward six Navy ships that were escorting the guided missile submarine USS Georgia through the Strait on Monday. After the Coast Guard cutter Maui unleashed a second volley of warning shots, the Iranian boats backed off, Kirby said.

“They were acting very aggressively,” Kirby told reporters at the Pentagon. He said they got within 150 yards of the U.S. ships, which included the guided missile cruiser USS Monterey. A day earlier, the Monterey had intercepted an arms shipment aboard a dhow in the Arabian Sea apparently headed for Yemen, whose Houthi rebels are supported by Iran.

Kirby said the Maui fired two rounds of warning shots from its .50-caliber machine gun — the first round when the Iranian boats got to within 300 yards of the U.S. ships, and the second when they got within 150 yards.

“After the second round of warning shots the 13 fast attack craft from the IRGC-N broke contact,” he said, ending the encounter.

Kirby said he had no further details about the incident.