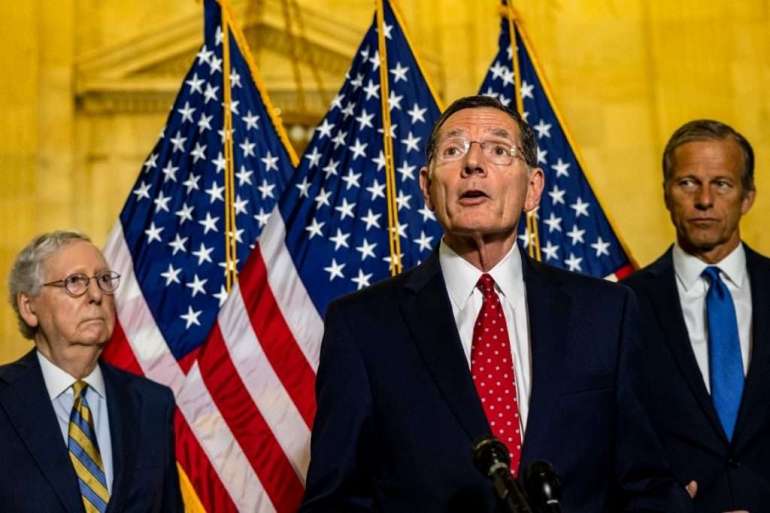 McConnell proved unsuccessful in 2012, but Republicans did retake the Senate majority for the last two years of Obama’s second term and held it until this year.

Democrats have a precarious grasp on power in both houses of Congress, where the Senate is split 50-50 and Democrats have a single-digit margin in the House. Historically, the party in power tends to lose seats in the midterms, and political prognosticators say Republicans have a strong chance to wrest back one or both chambers next year.

Barrasso was likely speaking rhetorically, as it would take a substantial landslide for Republicans to win enough seats to potentially oust Biden before the end of his term.

However, both Republicans and Democrats in recent years have managed to vex presidents of the other party and block parts of their agenda after breaking unified control during the midterm contests.

During his remarks, Barrasso said he was “looking forward to a very successful 2022,” and argued that Biden’s agenda had been out of step with the American mainstream.

While the midterms are still more than a year away, both sides are navigating the current Congress with an eye toward November 2022. It was one factor in Senate Republicans’ decision to tank the formation of an independent panel to investigate the events surrounding the Jan. 6 insurrection, and it has colored ongoing negotiations over infrastructure spending, among other issues.

Earlier this week, McConnell vowed to block Biden from appointing a Supreme Court justice in 2024 — as Republicans successfully did in 2016 — if the GOP regained the Senate majority, and left open the possibility to do so even before then.

For its part, the White House shrugged off Barrasso’s bravado.

“The President looks forward to continuing to deliver for the American people, continuing to make government work for them again, and continuing to bring our country together — after having reduced cases of the worst public health crisis in over a century by more than 90%, signed historic economic legislation that helped fuel unprecedented job growth for any administration’s first 100 days in office, protected Americans’ health care, and restored our leadership and competitiveness in the world,” White House spokesman Andrew Bates said in a statement.

— Chris Cadelago contributed to this report