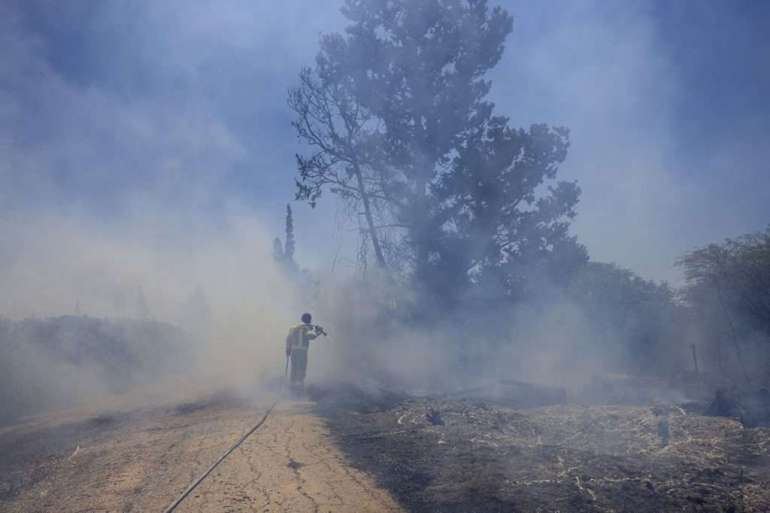 The march posed a test for Israel’s fragile new government as well as the tenuous truce that ended last month’s 11-day war between Israel and Hamas.

Palestinians consider the march, meant to celebrate Israel’s capture of east Jerusalem in 1967, to be a provocation. Hamas called on Palestinians to “resist” the parade, a version of which helped ignite last month’s 11-day Gaza war.

With music blaring, hundreds of Jewish nationalists gathered and moved in front of Damascus Gate. Most appeared to be young men, and many held blue-and-white Israeli flags as they danced and sang religious songs.

At one point, several dozen youths, jumping and waving their hands in their air, chanted: “Death to Arabs!” In another anti-Arab chant, they yelled: “May your village burn.”

In a scathing condemnation on Twitter, Foreign Minister Yair Lapid said those shouting racist slogans were “a disgrace to the Israeli people,” adding: “The fact that there are radicals for whom the Israeli flag represents hatred and racism is abominable and unforgivable.”

The crowd, while boisterous, appeared to be much smaller than during last month’s parade. From the Damascus Gate, they proceeded around the Old City to the Western Wall, the holiest place where Jews can pray.

Ahead of the march, Israeli police cleared the area in front of Damascus Gate, shut down roads to traffic, ordered shops to close and sent away young Palestinian protesters. Police said that officers arrested 17 people suspected of involvement in violence, some of whom threw rocks and attacked police, and that two police officers needed medical treatment. Palestinians said five people were hurt in clashes with police.

The parade provided an early challenge for Israel’s new prime minister, Naftali Bennett, a hardline Israeli nationalist who has promised a pragmatic approach as he presides over a delicate, diverse coalition government.