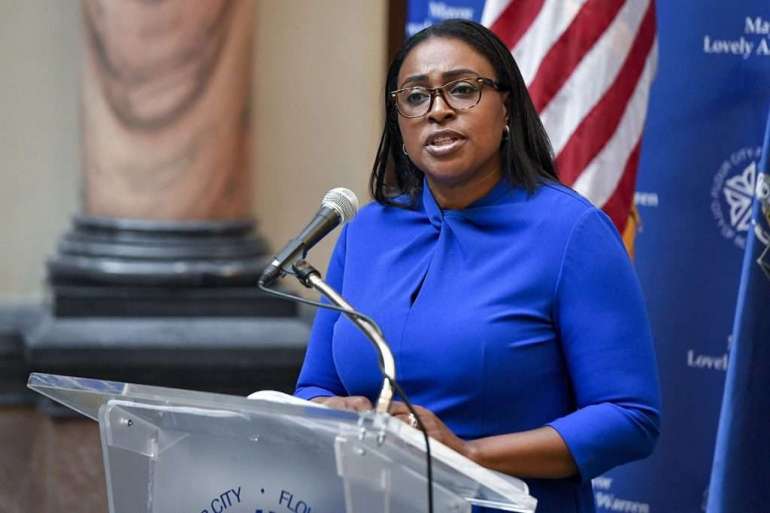 That Warren has maintained much of her support despite that trifecta of scandals and with little evidence that crime, poverty and deep racial disparities have greatly improved during her tenure would seem counterintuitive. But many Rochesterians — especially in its Black communities — see Warren as a fighter who is persevering despite relentless roadblocks and odds stacked against her. They see themselves in her, said Adrian Hale, a native of Rochester who manages workforce development and education at the city’s Chamber of Commerce. He pointed to job termination rates that are three to four times higher for workers of color and different treatment from law enforcement that the city’s Black residents have come to expect.

“Yeah, you watch the mayor deal with stuff, and you look at it in solidarity, you don’t necessarily look at it with that same scrutiny,” said Hale, who last fall received several nudges to mount his own challenge against Warren. Hale said he hasn’t yet decided how he will vote in the June 22 primary.

Warren evoked that sense of grievance in her first public statement following her husband’s arrest last month, delivering an emotional five-minute speech that touched on issues of racism and sexism while also addressing political hits from her opponents and invoking a higher power’s guidance.

She called the timing of the arrest “highly suspicious,” just weeks out from the start of early voting. Warren has not been implicated in any of the charges against her husband.

“People would try anything to break me,” she said. “But every step of the way God has guided my path. He showed me the way to repair our police department. … He showed me how to overcome.”

Police violence and pandemic disparities have called attention to tensions in Rochester this year, but the city’s persistent divides can be tracked through multiple lenses including 1930’s era residential redlining and the steady decline of the city’s signature corporate citizen, Eastman Kodak. Roughly one-third of the population lives in poverty. The congressional district that includes Rochester was ranked last year as the second worst in the country for Black people. Black people are almost three times as likely to be unemployed and three times as likely to live in poverty as white people in the region.

“You know, when you see somebody in a position of power, whether she’s guilty or not — none of that even matters, because guess what? You are viewing what she’s going through, through your own experiences. And when she says ‘it’s a witch hunt‘ or ‘it’s a conspiracy,’ you believe her,” Hale said.

Warren, in a recent interview with POLITICO, said she wants a third term because she hasn’t finished the work she’s started. As for critics who say the scandals have distracted her at a time a strong mayor is needed, she issued a challenge: Find a time when that actually happened.

“Has it been [a distraction]? It hasn’t been. Even through all of it, I kept working and I will keep working. Because to me, that’s all noise,” she said, of the criticism.

“Actually, it has fueled me to do even more,” she added.

Warren points to her work during the pandemic, when local leaders across New York tried to keep their cities running amid ever-changing state guidelines and with large portions of funding being temporarily withheld by the state. Rochester furloughed more than 400 workers in May 2020, one of the many hard choices she credits for being able to balance the city’s budget. And development continued on some city projects despite the circumstances, like neighborhood investments and the completion last fall of a downtown skate park on the Genesee River as part of a multiphase riverfront revitalization.

“So when I’m looking at the work — collectively, all the good that we have done — it outweighs the challenges by far,” she said. “And I know that there’s more work that needs to be done.”

Should she clinch another term, Warren might have more of an opportunity to make a mark than ever. In contrast to last year, when local officials were weighing which programs and services they might need to cut to make ends meet, Rochester will instead soon be flush with federal stimulus cash. The city is seeking residents’ input on how to use $202 million allocated from the American Rescue Plan Act, and Warren said those dollars might go toward programs for infrastructure, lead replacement, home ownership and entrepreneurship, “all those things that you always wished you had all the money to do.”

The city’s school district — which has for years recorded some of New York’s lowest performance rates — is set to receive roughly $284 million in federal stimulus money and $84 million in new state funding. The state money, when combined with other savings measures, should be enough to close the district’s budget gap and the federal money could go toward the kind of culturally-informed programs and staffing that officials have long sought for the city’s children.

She is also proposing dramatic overhauls to the police department, which has come under fire not only for the Prude case, but for other incidents like when officers pepper sprayed a 9-year-old girl they were trying to restrain in February. The city had launched some efforts to change the way officers respond to mental distress in the aftermath of Prude’s death, but a new Person In Crisis team set up by the city was not involved when the girl was detained. Warren’s budget proposal includes expanding that PIC team and funding for the city’s mostly-volunteer Police Accountability Board. She also has asked for a new city residency requirement for police officers, which would require approval from state lawmakers.

While all of that bodes well for the near term, Warren’s critics say she is not the right person to renew confidence on the city’s leadership. The Prude case played a large role in that assessment.

A six-month independent investigation into city officials’ handling and hiding of Prude’s death determined in March that “the decision not to publicly disclose these facts rested with Mayor Warren, as the elected Mayor of the City of Rochester,” but was significantly impacted by communications among her counsel, city officials, and then-police chief La’Ron Singletary, whom Warren fired.

That kind of secrecy is emblematic of larger complaints critics have had about accountability within her administration and in the city’s broader civic life for years. State-appointed overseers have pointed to discord among school board members and rampant money mismanagement — rather lack of resources — as the primary obstacle to reforming the embattled education system.

Of course one mayor “can’t wave a magical wand and make it go away,” said state Assemblymember Harry Bronson, a Rochester Democrat who has been critical of Warren and faced a primary challenge from her chief of staff last year. That said, he added, the city needed a leader who will be laser-focused on the issues and be able to rally other officials, nonprofits, religious leaders and experts to find solutions. So far, Warren’s record has shown more barriers than bonds to creating that dialogue, he said, especially withing a bitterly divided local Democratic Party.

“Instead of really hitting these issues, she’s distracted by all the things swirling around her. And when that distraction occurs, then she deflects,” Bronson said. “This is all happening at a time where we should be addressing all the shootings that have happened in our city, we should be addressing how to truly respond and how to reform law enforcement so we move from control and force to one of true public safety. We move to a place where City Hall is transparent on what’s happening instead of filtering out information.”

That’s where her opponent, Evans, comes in.

“There is no way Rochester is going to be able to solve all of these challenges with the limited resources that it has — a lot of it is so much bigger than one person, and it’s important that you have multisector collaborators in order to solve it,” he said in an interview “But you have to be humble enough to be able to not hold grudges against people that you may have disagreed with in the past and to get past past slights in order to solve a lot of these issues. So all of my agenda is very much predicated on being able to work in a collaborative effort method, and if we fail on that end I can tell you right now it won’t be successful.”

Evans has mostly avoided direct attacks on Warren’s personal and political life. But he argues that Rochester can do better and he’s the “bridge-builder” the city lacks. Despite his 18 years in elected office, Evans said he considers himself a financial services guy — he works at ESL Federal Credit Union — rather than a politician.

He was actually about to be done with elected office, he said, but the events of the past nine months persuaded him otherwise. His policy proposals include ramping up skills and work training for the city’s youth and a package of policies to reduce gun violence, which would include hiring a new “gun czar” and addressing illegal gun trafficking through the city. Shootings have steadily risen in the past 18 months with 163 victims and 17 deaths since June 12, according to city data.

While Rochester’s tensions are not unique to major urban areas, the oft-ignored upstate city needs a dynamic kind of spokesperson compared to its downstate neighbors, he said.

“People do forget about upstate, we can’t let them, because not only do we have challenges, we also have assets. And I think a mayor has to elevate that. I plan on making a lot of noise as mayor in trying to get Rochester the attention that it needs. Because unfortunately, the attention that we’ve gotten over the last nine months has not been good.”

Evans and Warren have similar resumes. They are 41 and 43, respectively, both grew up in the city and ascended to local political leadership early — Warren as City Council president and Evans as president of the school board. He was elected to City Council in 2017 and would have been up for reelection this year.

Like many candidates before them, they both say education is the longterm key to rebuilding Rochester. They agree that policing needs to shift to crisis intervention efforts and rebuilding trust within communities. They both say they won’t be able to do it alone.

Local observers point out that Warren never polled well prior to her two previous wins. And a 39-percent plurality of voters said Warren’s husband’s arrest makes them more likely to vote for Warren, compared to one-quarter of voters who said they were now less likely to vote for her.