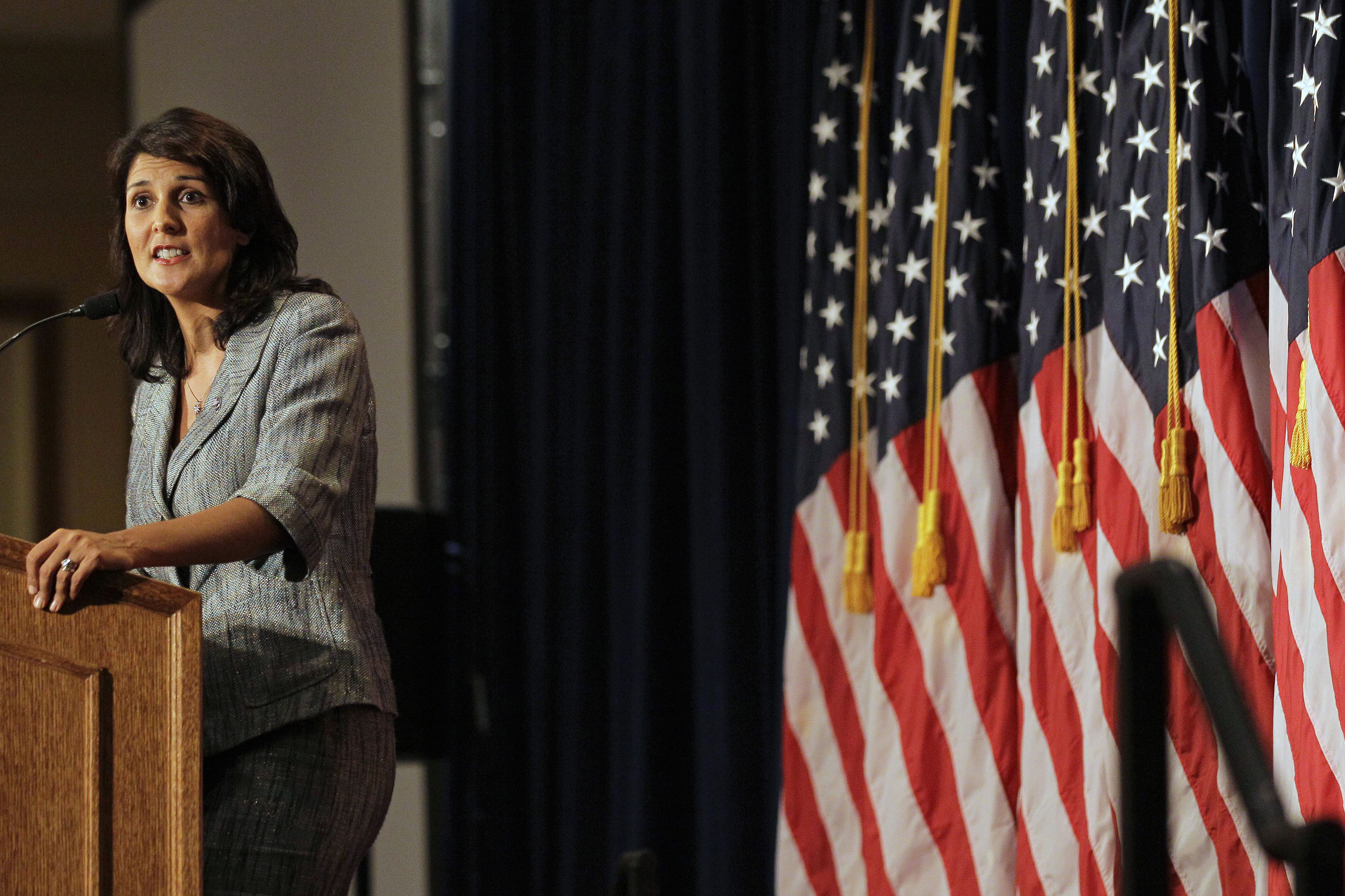 Haley later hailed Trump’s approach to foreign policy, saying she “saw firsthand as ambassador to the United Nations that Donald Trump put America first” and telling a humorous story about Trump’s decision to label North Korean leader Kim Jong-Un “Little Rocket Man,” saying it showed how the former president had “a way of getting people.”

The remarks represent a break for the former Trump cabinet member, who has vacillated in her approach toward Trump as she tests the presidential waters following his defeat. The early struggle to calibrate her position on Trump has penned Haley in between those in the GOP who are eager to move on from Trump and those who want to stick by him.

It began a day after the Capitol siege, when Haley delivered a speech before Republican National Committee officials in which she said the then-president’s actions in the aftermath of the 2020 election “will be judged harshly by history.”

The former ambassador went further in an interview published by POLITICO Magazine a few weeks later, saying that Trump had “lost any sort of political viability” and that she didn’t think he was “going to be in the picture” any longer, before adding: “He’s fallen so far.”

The remarks infuriated those in Trump’s orbit, who regarded them as an act of disloyalty and part of an effort to seek distance from the former president. In February, Trump turned down a request from Haley to meet at his Mar-a-Lago resort.

Since then, Haley has been warmer toward Trump. In April, she said she would forgo a 2024 presidential bid and support Trump should he run.

Haley’s 30-minute speech before the 500-person Iowa GOP dinner comes as she embarks on a three-day swing across the state. The former South Carolina governor is holding fundraisers for Gov. Kim Reynolds and two members of the state’s congressional delegation, Reps. Randy Feenstra and Mariannette Miller-Meeks, all of whom are up for reelection next year. She is also holding events with former state House Speaker Linda Upmeyer and the Story County GOP.

The trip is Haley’s first to Iowa this year and comes as several other would-be Republican presidential candidates make appearances in the state. Arkansas Sen. Tom Cotton is headlining an event in Sioux City later this month, and former Vice President Mike Pence, former Secretary of State Mike Pompeo and South Dakota Gov. Kristi Noem are all slated to appear at next month’s Family Leader Summit, a gathering that will attract evangelicals from across the state. Two other potential 2024 candidates, South Carolina Sen. Tim Scott and Florida Sen. Rick Scott, made visits to the state earlier this year.

During the speech, Haley embraced the cultural issues currently animating the conservative base. She railed against teaching in schools that systemic racism has been ingrained in society, accused Democrats of “strong-arm[ing] big tech, big business, and big government into silencing anyone who doesn’t toe the liberal line” and slammed the opposing party for supporting “riots and lawlessness.”

Haley also offered a preview of how she may distinguish herself in a 2024 presidential contest: as a Republican with a diverse background. The former ambassador called herself “the proud daughter of Indian immigrants” and said that growing up she was “a brown girl in a black-and-white world.”

“Take it from me, the first female and minority governor of South Carolina,” Haley said. “I said it last year at the Republican national convention, and I will keep on saying it: America is not a racist country. It’s just the opposite. America has done more to ensure equal justice and opportunity than any other country in history.”

Haley, who did not speak explicitly about running for president in 2024, also weighed in on a sensitive issue for Iowans: whether the state should retain its first-in-the-nation status.

After her speech, Iowa GOP Chairman Jeff Kaufmann took the stage to ask Haley whether she supported keeping Iowa atop the presidential nominating calendar. Haley said she was “fine” with keeping Iowa first, as long as her home state of South Carolina maintained its status as the first Southern state to hold its nominating contest.