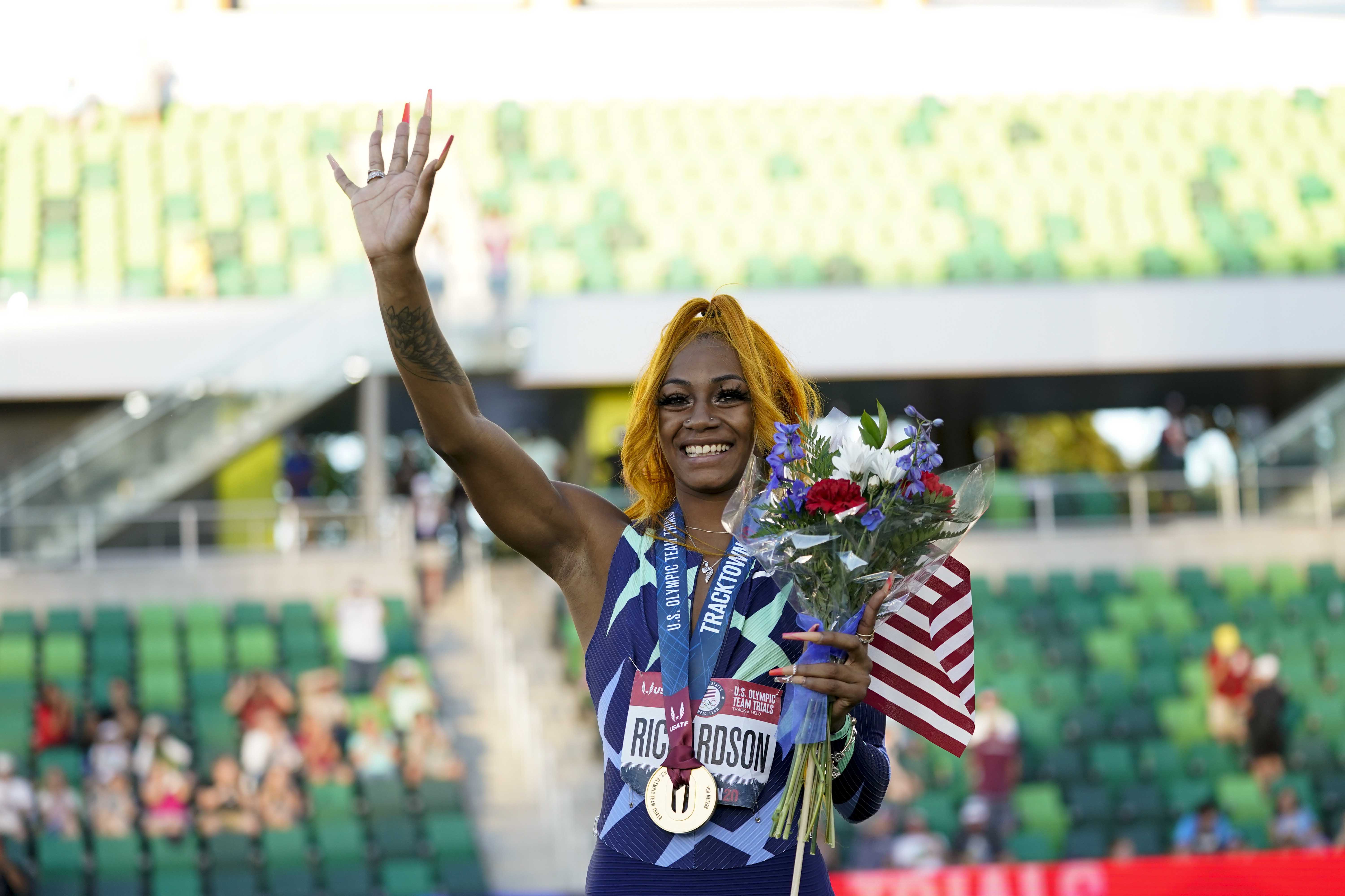 Psaki added that Richardson is an “inspiring woman” who has been through a lot in her personal life, and that she is one of the fastest women in the world. “And that’s an important part of this story as well,” she said.

“The press who love to bathe in the intersectionality of race-gender-sports should ask @JoeBiden if he believes Sha’carri Richardson should be barred from representing America for using a drug legal in most states that doesn’t impact performance,” Gaetz tweeted, adding “I sure as hell don’t.”

Later Friday afternoon, Gaetz, one of the youngest members of Congress, highlighted the generational divide over marijuana policy by tweeting an AP story with the snarky comment, “Ok, Boomers.”

This sentiment is shared on the other side of the aisle, as well. Sen. Cory Booker (D-N.J.) tweeted in support of the sprinter, saying “Sha’Carri is an incredible athlete with a bright future. That her dreams are being crushed over a substance that should be legal across the country is devastating and wrong. Her heartfelt apology shows her strength even in the face of adversity.”

Biden is out of step with his own party on marijuana policy. Polling shows a strong majority of Americans favor legalization, but Biden has resisted such calls and his administration has refused to reschedule the drug, which the federal government considers an illegal substance with no medicinal value. Biden did, however, call for decriminalization of marijuana during his successful 2020 presidential campaign. After he assumed office, five Biden White House staffers lost their jobs because they admitted to smoking marijuana.

Richardson, who placed first in the 100-meter dash at last weekend’s U.S. Olympic trials, could be disqualified from the U.S. track and field team over her positive marijuana test. On Friday, she accepted a one-month suspension from the U.S. Anti-Doping Agency, disqualifying her trial results and ensuring that she won’t compete in the individual 100-meter race in Tokyo. This news came just weeks before the official start of the 2020 Olympic Games, which were rescheduled from last year amid the global Covid-19 pandemic.

Richardson appeared on NBC’s “Today” show on Friday morning, where she apologized for her test result and said she had used marijuana as a coping mechanism. Asked whether she’s hoping she’ll have a chance to compete in the 4×100 relay, she said, “Right now, I’m just putting all of my time and energy into dealing with what I need to do, which is heal myself. So, if I’m allowed to receive that blessing, then I’m grateful for it, but if not right now, then I’m just going to focus on myself.”

Gaetz has long bucked his own party’s orthodoxy by advocating for marijuana legalization and decriminalization, dating back to his days as a Florida state House representative before his election to congress in 2020.

Gaetz continued tweeting about Richardson into the afternoon, saying Medina Spirit, the horse that won the Kentucky Derby under a veil of suspicion, “did harder drugs than Sha’Carri Richardson and is still racing.” Later, Gaetz quote-tweeted a message from Richardson that read “I am human,” adding: “Maybe if @POTUS and @VP didn’t support the racist drug war, they’d have this American Champion’s back.”

Gaetz told POLITICO that he’s said more to defend Richardson than Biden and Harris — adding that the president should speak out against the “stupid policies” that will keep Richardson from competing.

“How come nobody’s asking Joe Biden and Kamala Harris for their perspective on this American athlete who is not able to represent our country because of a substance that doesn’t impact our performance and is illegal in most of our states?” Gaetz asked, referencing the “woke press.”

“What’s wrong with America? What happened to us?” he continued. “Like, are we simultaneously so woke and tied up in canceled culture that we wouldn’t allow this woman to represent our country?”

In Gaetz’s home state of Florida, Black Democrats were similarly outraged by Richardson’s treatment. Florida state Rep. Michele Rayner-Goolsby noted the topic of racial disparities in drug policy came up during a hearing of a state House committee she sits on.

“There’s a lot to unpack here. I remember making the point-in committee- about the disparate treatment of Black folks when it comes to marijuana. Exhibit 985,” she wrote on Twitter. “Let Sha’Carri run!”

As for Richardson, she had a message for “Today” viewers as she apologized for her test results.

“Don’t judge me, because I am human,” she said. “I just happen to run a little faster.”

Marc Caputo and Olivia Beavers contributed to this report.