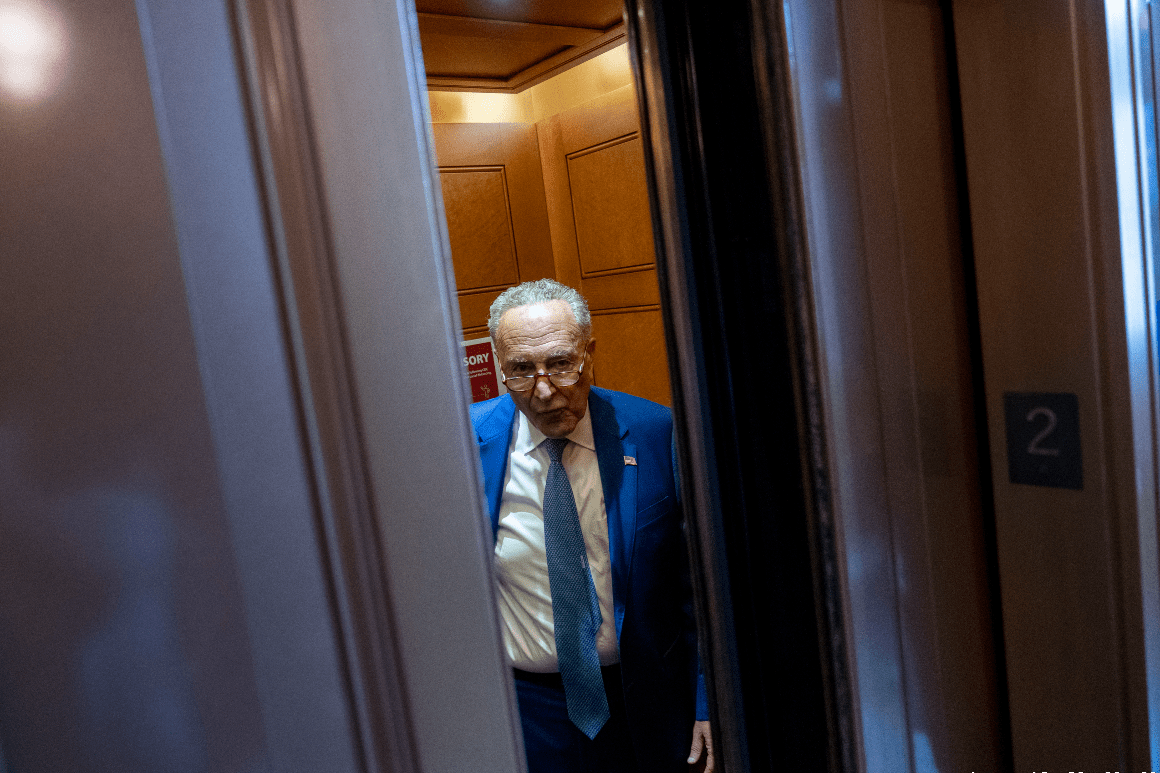 Schumer also offered the bipartisan group more time to negotiate, if Senate Republicans agree to move forward Wednesday. If the cross-aisle legislation is not finished by Thursday, Schumer said the Senate could consider elements of the underlying infrastructure framework that have already passed key committees.

But that’s not likely to appease Republicans, many of whom want to see cost estimates from Congress’ nonpartisan budget scorekeeper before voting to start debate. Sen. Rob Portman (R-Ohio), the lead GOP negotiator, said Tuesday that the group was still waiting for the legislation to be scored by the Congressional Budget Office and the Joint Tax Committee.

“We’re waiting on a [Congressional Budget Office] score. We don’t have [legislative] text. So until we do, I’m not comfortable voting on any procedural motions to move forward,” said Sen. Todd Young (R-Ind.), one of the senators working on the package.

Still, Young added that he hoped Wednesday’s vote wouldn’t kill the bipartisan negotiations, saying “it would be a shame to throw it all away.”

Sen. Susan Collins (R-Maine), one of the GOP negotiators, is pushing for the vote to be delayed until Monday and added that a failed vote on Wednesday “certainly is not helpful.” Sen. Bill Cassidy (R-La.) said the bipartisan group needed to discuss Schumer’s remarks on Tuesday before he could say how he will vote on Wednesday.

But given that Schumer has already started the floor proceedings, the most straightforward path to moving the vote to Monday would require buy-in from all 100 senators. And Democrats are supportive of Schumer’s move.

On Monday Sen. Jon Tester (D-Mont.) told members of the bipartisan group: “We rolled this thing out a month ago and we’re still talking about it? C’mon guys. Everybody on that call has been around long enough to know nothing happens unless pressure is put on.”

Schumer’s push to move forward on the bipartisan infrastructure framework comes as Senate Democrats also prepare a $3.5 trillion social spending plan that they expect to wrestle through without GOP buy-in. Schumer has also set a Wednesday deadline for Senate Democrats to reach an agreement detailing how committees will construct that bill.

It’s not clear if the failure of the bipartisan deal would force an increase in the separate bill’s $3.5 trillion price tag.

Schumer has long insisted that President Joe Biden’s physical infrastructure and social spending plans are proceeding on two separate tracks. Biden and a bipartisan group of 10 senators announced agreement on an infrastructure framework in June, but translating that into legislative text has proven a heavy lift.

Sen. John Cornyn of Texas, a Republican close to Senate Minority Leader Mitch McConnell said the vote will still fail on Wednesday despite Schumer’s entreaties: “How would he expect us to vote on a bill that doesn’t even exist yet.”

Members of the bipartisan group negotiating the infrastructure package insisted Wednesday’s vote didn’t mean that the talks were ending. Despite Schumer’s insistence that he would bring the bipartisan bill to the floor as early as Thursday if the text is ready, GOP negotiators reiterated Tuesday that they could not vote with Democrats on Wednesday.

“This work can move forward whether we get it done in time for a markup this week or the first part of next week,” said Sen. Mike Rounds (R-S.D.), a member of the group. “Either way I think the work product is the most important thing to focus on right now.”

“The public should know they’re rejecting a bipartisan infrastructure approach,” Pelosi told her members, according to people familiar with the remarks.

Pelosi also suggested that the House could tweak whatever bipartisan bill is passed by the Senate, a potential response to the growing unrest among some senior Democrats in her caucus. “When we get the Senate bill, we may want to tweak this,” the speaker said.

And while Schumer insisted that the vote was not a make-or-break moment for the Senate’s bipartisan talks, some progressives don’t see it that way.

“They’re trying to get everybody to coalesce but if that doesn’t happen, we’re going to have to move forward,” Rep. Pramila Jayapal (D-Wash.), who leads the Congressional Progressive Caucus, told reporters.