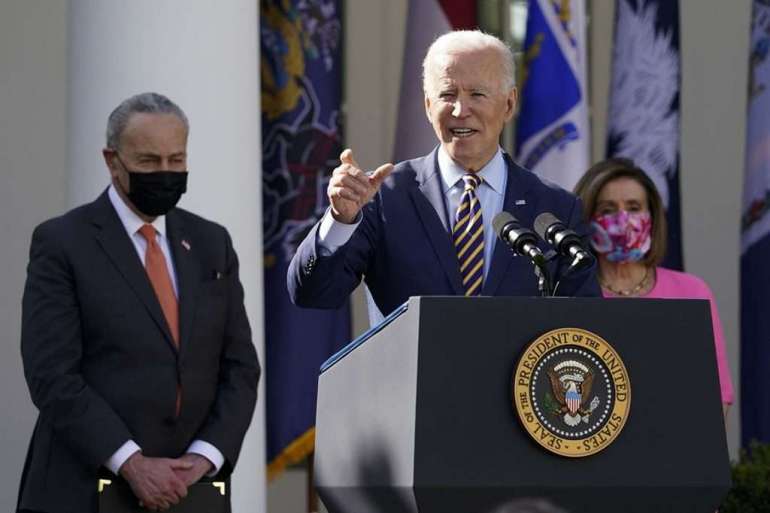 More immediately, both Pelosi and the White House know that having senior House Democrats trashing the already delicate bipartisan infrastructure negotiations in the Senate could dim the chances of a final deal being reached.

“A lot of people here have opinions and if I were the White House, I would certainly want to do some more intentional outreach before I make any assumptions about what people will support,” said Rep. Scott Peters (D-Calif.). “Everybody’s got a few issues, and they can be worked, around but it’s going to take work. There’s only a small margin here.”

President Joe Biden’s ability to navigate the diverse factions within his party will be put to the test this week, when Senate Majority Leader Chuck Schumer (D-N.Y.) is expected to force a procedural vote on the bipartisan bill no one has seen. While many expect the Senate’s vote on the bipartisan deal to fail on Wednesday, negotiators continued to furiously work Tuesday to reach an agreement on how to pay for the package, which focuses on physical infrastructure.

Though the White House says it’s in constant contact with Pelosi and her team, passing nearly $4 trillion in spending for infrastructure projects, elder and child care, and paid leave remains a difficult task in a House where Democrats have just four votes to spare.

“His legacy is tied into this,“ Rep. Gregory Meeks (D-N.Y.) said of Biden. Meeks added that at the end of the day, it will come down to the president to get both the bipartisan and reconciliation bills done. “Clearly, the deal closer is the White House … The one that can close a deal and make it happen is the president.”

But some Democrats have questioned how much of an effort the White House is really putting into making sure House members feel heard at this late juncture in the negotiations. DeFazio, for one, said Tuesday that while he knows the White House is aware of his complaints, he hasn’t been contacted directly by Biden’s team since then.

A White House official countered that senior aides are in contact regularly with DeFazio and his office, and pointed to a trip Transportation Secretary Pete Buttigieg recently made to the congressman’s district. DeFazio himself told colleagues on Monday that he’s been talking to White House counselor Steve Ricchetti.

“We’re always in close touch with the President’s colleagues in the House, who he deeply respects and values as core partners in delivering on generational infrastructure progress,” said White House spokesperson Andrew Bates.

In a sign that the tensions aren’t yet ebbing, DeFazio is set to send a letter to Pelosi and Schumer this week, once again raising issues with the process by which the bipartisan infrastructure bill is proceeding. One point of contention the congressman will note is that the Senate bill doesn’t include money for earmarks — also known as member-designated projects — that were passed in the House.

“We should reject any effort to categorically exclude the thorough, transparent, and transformational process undertaken by the House,” DeFazio states in the draft obtained by POLITICO, which also urges Democratic leaders to “ensure that any product from the Senate will be conferenced” with the House.

But White House officials already privately dismissed the idea of bicameral negotiations in conversations with House Democrats this week, telling them that conferencing is not realistic. Officials are warning that continued pushback from House members could hamper talks with Democratic moderates and Republicans in the Senate and, in turn, weaken the substance of the reconciliation package.

House Democratic leadership has been left trying to contain DeFazio’s anger before other lawmakers began echoing it. During a private caucus meeting Tuesday, Pelosi went so far as to say the House could “tweak” whatever infrastructure bill the Senate sends over, a clear nod to DeFazio’s concerns.

Privately, however, most Democrats say they believe they’ll have to swallow whatever the Senate passes — a reality House Majority Leader Steny Hoyer acknowledged later Tuesday.

“I expect the senators to say we can’t pass that if you amend it at all, take it or leave it,” Hoyer told reporters. “Ultimately we will deal with the art of the possible, not the art of the preferable.”

Some Democratic lawmakers and top aides disputed the idea that the White House has been ignoring the House. Administration liaisons are “omnipresent,” as one senior aide described it, often popping up at caucus meetings and on calls with senior staffers. The problem, those lawmakers and aides said, was that the House was always likely to have been left out of the Senate negotiations and some members were just now fully realizing that.

“Peter has been here a long time and is very prideful of his work and his knowledge and ability and input,” Rep. John Larson (D-Conn.) said of DeFazio. “You can understand why — however benign the neglect may be — [senators] like to assume there’s only one chamber.”

On Monday’s call with his committee members, DeFazio asserted that the White House was only concerned about top-line numbers and were letting Republicans write the bipartisan infrastructure bill.

Other top House Democrats who oversee policy that touches on the current Senate talks — like Ways and Means Chair Richard Neal (D-Mass.) and Energy and Commerce Chair Frank Pallone (D-N.J.) — have not publicly expressed frustration like DeFazio. But multiple lawmakers and aides said that while DeFazio is certainly the most vocal, he is not alone. And those frustrations could continue to spill out publicly if the White House doesn’t act quickly.

“A lot of us are very frustrated because we don’t know what’s going on,” said Rep. Juan Vargas (D-Calif.). “We hear that the White House is very involved, then we hear they’re not. Then we hear that there’s a deal, [then] hear there’s not.”

During the House Progressive Caucus’ meeting on Tuesday — its first in person since the beginning of the pandemic — talk about those bills turned into a forum for lawmakers to vent their frustrations about being shut out of negotiations and losing out on their priorities.

But some progressives blame the Senate, not the White House, for the cause of their heartburn.

“Obviously there’s some things we would like to have some additional say on but the fundamentals are there,” said Rep. Mark Pocan (D-Wis.) “I had more contact in the first month of the Biden administration than four years of the Obama administration.”