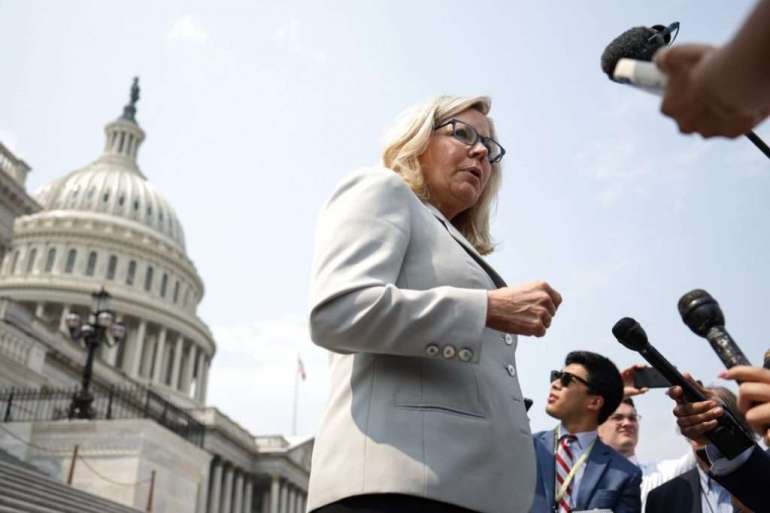 ”Is she a Republican?” freshman Rep. Troy Nehls (R-Texas) quipped of Cheney. Nehls was one of five Republicans tapped by McCarthy to serve on the select panel.

The former No. 3 House Republican didn’t stop at supporting Pelosi’s move, standing before a bank of cameras on the Capitol steps Wednesday afternoon to torch McCarthy and reiterate her commitment to the select committee investigation of the violent riot.

Cheney’s decision to move ahead as the sole Republican on the panel further solidifies her exceptional status within the Capitol, a notorious and increasingly isolated figure in a GOP conference that emphasizes Trumpism above most else. For several of her Republican colleagues, Cheney has now committed a sin even more grave than her relentless criticism of the former president: publicly standing with Pelosi.

Some Republicans even raised the idea of Cheney facing consequences for her decision to stay involved with the panel, though they didn’t wade into the topic of what those should be.

“For her to stay on is not right. And she ought to have some consequences for that,” said Rep. Ralph Norman (R-S.C.). “She should probably just go and switch parties and be a Democrat. She’s gonna violate everything. She’s not in a leadership position so she has got some freedom, but this is so blatant.”

Norman predicted that GOP leadership would try to talk to Cheney about the matter and, if she refuses to meet with them, House Republicans should hold a vote on her future among them. “As far as any consequences for her, [it] ought to go to the conference — let us vote on it as a group,” Norman added.

McCarthy has indicated it may be untenable for Cheney to keep her committee assignments if she remains on the select panel, telling reporters at the beginning of the month that he didn’t know when “someone would go get their committee assignments from the speaker and expect them to have them from the conference as well.” The GOP leader did not respond to a question Wednesday on whether he would seek to strip Cheney’s assignments.

Cheney, for her part, is unfazed by the criticism from her fellow Republicans following Pelosi’s decision to block Banks and Jordan from the investigative panel.

“We must have this select committee investigation,” Cheney told reporters, calling it “our only option left” after Senate Republicans blocked an independent, bipartisan commission on the attack. “We cannot allow those voices who are attempting to prevent the American people from getting the truth to prevail.”

Democrats are unlikely to back down from their blockade of Banks and Jordan, meaning Cheney could be the sole Republican to serve on the committee when it holds its first hearing next Tuesday with members of the Capitol Police and Metropolitan Police Department who responded to the Jan. 6 insurrection. To Pelosi’s party, permitting two Republican members known for pugnacious partisanship would effectively doom the select panel’s credibility even if they accepted McCarthy’s entire slate.

Jordan “may well be a material witness to events that led to” the Jan. 6 riot by Trump supporters, she said, while Banks had “disqualified himself” because of his comments “demonstrating that he is not taking this seriously.” She flamed McCarthy as well, adding that her conference’s leader has “at every opportunity attempted to prevent the American people from understanding what happened” during the insurrection.

The defiant Cheney, who was ousted as House GOP conference chair in May over her repeated public criticisms of Trump, is arguably more important to many Democrats than any of their own members on the select panel.

Having Cheney on the dais allows Democrats to deflect GOP criticisms that they’re engaging in a partisan witch hunt focused solely on Trump. In Cheney, Democrats can say there is a Republican in the room for the investigation — and one of the most traditionally conservative members of her party at that.

Pelosi called Cheney before she made her announcement about vetoing McCarthy’s picks, informing the Wyoming Republican of her plans and gauging her opinion on the move, according to multiple Democrats familiar with the conversation.

“We have Republicans on the committee,” said Rep. Jamie Raskin (D-Md.), one of the members tapped by Pelosi to serve on the committee. “We have Rep. Cheney. We have a bipartisan committee right now, and the appointments belong to Speaker Pelosi.”

“This is a bipartisan committee that is going to seek the truth, and there is nothing partisan about that,” added Rep. Stephanie Murphy (D-Fla.), another panel member.

While Republicans are hammering Pelosi for leading a partisan inquiry, McCarthy and other members of GOP leadership informally whipped against a bipartisan agreement to form a nonpartisan 9/11-style commission to dig into the insurrection.

Rep. John Katko (R-N.Y.) struck a deal with Rep. Bennie Thompson (D-Miss.), whom Pelosi later appointed as chair of the select panel, only to find that leadership was undercutting his work. Despite that effort, 35 House Republicans in May voted to support a nonpartisan commission. The proposal later fell to a Senate GOP filibuster.

But even some of the GOP’s most ardent backers of an independent Jan. 6 commission are criticizing Pelosi’s decision.

Katko said Wednesday that he backed McCarthy’s threat to fully boycott the select panel unless Pelosi backtracked on her veto: “I think it’s a logical response to what Pelosi did, and it’s further indication that this is going to be a completely political exercise.”

Rep. Tom Rice (R-S.C.), who voted to impeach Trump alongside Katko and Cheney, said Pelosi’s decision “shreds any tiny bit of credibility that this committee had.”

Banks had been prepared to participate in the select panel as top Republican, telling POLITICO in an interview he discussed logistical matters related to the investigation with Thompson on Tuesday afternoon but got no answers. Thompson’s office did not respond to a request for comment on the call.

Republicans are now promising their own Jan. 6 inquiry. Yet some Democrats said Republicans missed their chance at participation in the select panel when they opposed the independent commission.

“Anyone who voted against that effort to have a bipartisan commission modeled after the 9/11 Commission … really lost their opportunity to criticize whatever efforts we now must take, with that option off the table,” Rep. Abigail Spanberger (D-Va.) told POLITICO.

Still, Pelosi’s decision sparked private fears among some vulnerable Democrats that it could encourage McCarthy to boot members off of committees in the next Congress if his party retakes the House.

Pelosi shrugged off the blowback from Republicans: “Perhaps you mistake me for someone who would care about that.”