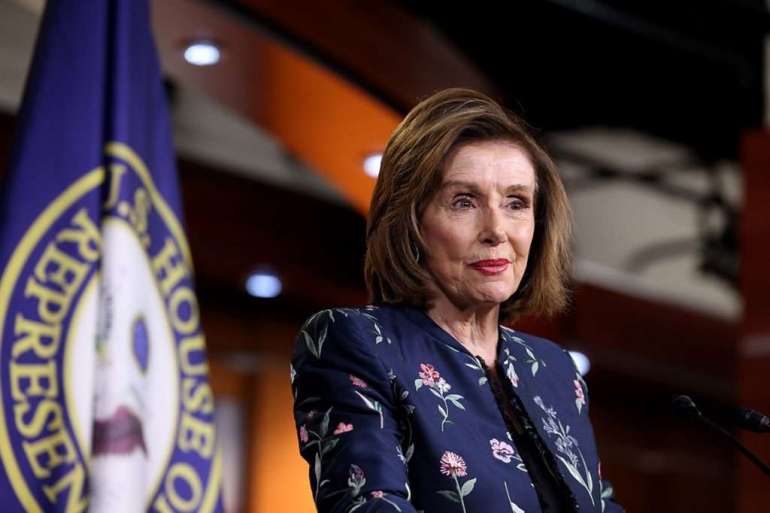 Later Thursday, Pelosi told reporters that “some” other Republicans have expressed interest in participating and that “everybody else” thought Kinzinger would be a good addition to the select panel. Its chair, Rep. Bennie Thompson (D-Miss.), told reporters before a meeting of Pelosi-appointed members that Kinzinger was one of a “number of” Republicans who’d been talked about to join.

Following the panel’s nearly two-hour-long meeting Thursday, Thompson was noncommittal on resolving the committee’s membership before its first hearing set for next week.

“We’re prepared to move forward with eight members,” he said, though he spoke glowingly of Kinzinger: “Well, I think his reputation speaks for itself. from all indications, He’s a fine representative.”

Kinzinger discussed his desire to join the select panel with other lawmakers before Pelosi chose Cheney earlier this month, according to a person familiar with the conversations. He declined to comment Thursday when asked about his potential addition to the select panel, whose first hearing will feature law enforcement responders during the siege of the Capitol by supporters of the former president.

But Kinzinger’s ally from Wyoming offered an effusive endorsement.

He would be a “tremendous addition to the committee. I think ultimately it’s up to the speaker, but I would certainly support it,” Cheney told POLITICO in a brief interview.

Kinzinger would likely be the final member added to the panel. No other House Republicans would serve and Pelosi doesn’t plan to appoint any other additional Democrats, according to aides close to the committee.

But Cheney — and Kinzinger, if appointed — will get a team of their own staff, with Thompson saying that an announcement on that front would come over the weekend. Cheney has already sent some names to Pelosi for consideration, including Riggleman, according to multiple sources. Panel members, including Cheney, huddled in Pelosi’s office Thursday for a lunchtime meeting.

When pressed whether Cheney put Riggleman’s name forward to Pelosi, Cheney demurred and reiterated only that “he’d be an excellent addition to the committee.”

She added that Riggleman, an experienced researcher of online extremism who has already dug into the far-right elements behind the insurrection, “would be tremendous” as an outside aide to the probe.

“Denver is somebody who’s got years of experience, especially in all the areas connected to cyber issues,” she said. “And I think [he] just would be a tremendous addition to the work of the committee in terms of understanding, recognizing the extent to which social media platforms were used, the communications that went on in the lead up to the 6th.”

At least one Democratic member of the select panel indicated he would support Kinzinger’s addition to its ranks, if Pelosi decides to name the Air Force veteran.

Beyond Kinzinger, it’s unclear whether any Republican lawmakers would consider participating in the panel. Rep. Jaime Herrera Butler (R-Wash.), who joined Cheney and Kinzinger in voting to impeach Trump in February told reporters that she would not participate.

“Unless this is made up of people who are not members of Congress, the American people cannot trust the results,” she said.

The effort to potentially beef up Republican representation on the select panel comes after McCarthy pulled all five of his choices on Wednesday following Pelosi’s veto of the two most controversial names on his list, Reps. Jim Banks (R-Ind.) and Jim Jordan (R-Ohio).

House Majority Leader Steny Hoyer said Thursday that it’s possible Jordan and other House Republicans who communicated with McCarthy could be asked to testify before the select panel. McCarthy, meanwhile, vowed that Republicans would undertake their own investigation of the events on Jan. 6 in response.

While several of Cheney’s fellow House Republicans have proposed holding a vote on her future among them after she stood by Pelosi’s veto of Banks and Jordan, McCarthy offered no indication that he would entertain a move as drastic as ejecting her outright. “I think it is a conference decision,” McCarthy told reporters.

But Pelosi dismissed McCarthy’s protests on Thursday, saying she made the right decision by blocking Banks and Jordan because of their “antics” in the months following the deadly insurrection.

“I’m not talking about him,” Pelosi said of McCarthy. “Let’s not waste each other’s time.”

Pelosi said her decision to block those two, while allowing McCarthy’s three other selections, to serve on the panel, had nothing to do with their votes to challenge certification of Trump’s loss on Jan. 6. In fact, Rep. Troy Nehls (R-Texas) also voted against certification and was not vetoed by Pelosi.

“The other two made statements and took actions that just would have been ridiculous to put them on a committee seeking the truth,” Pelosi told reporters.