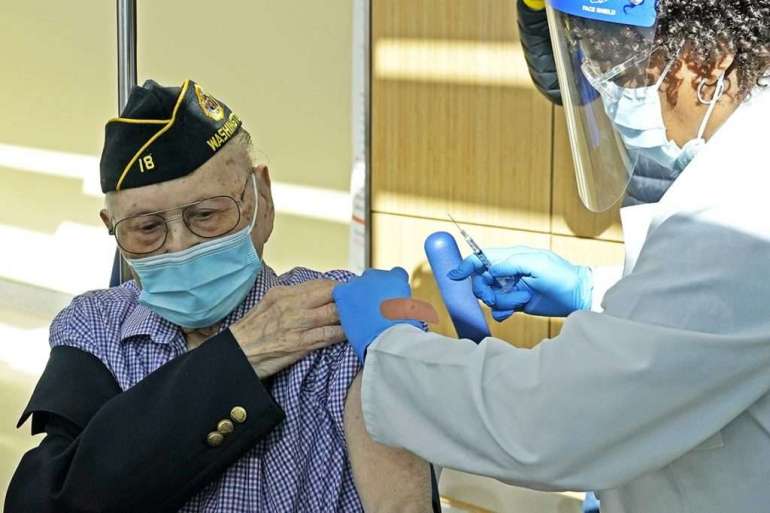 “In light of these developments, you have asked whether the ‘option to accept or refuse’ condition in section 564 prohibits entities from imposing such vaccination requirements while the only available vaccines for COVID-19 remain subject to EUAs,” said the memorandum opinion, which was issued for the deputy counsel to the president. “We conclude, consistent with FDA’s interpretation, that it does not. This language in section 564 specifies only that certain information be provided to potential vaccine recipients and does not prohibit entities from imposing vaccination requirements.”

The VA mandate for front-facing health care workers includes physicians, dentists, nurses, physician assistants and other frontline medical staff at its facilities across the country. These employees will have eight weeks to become fully vaccinated.

The rule is “the best way to keep Veterans safe,” VA Secretary Denis McDonough said in a news release announcing the move.

“Whenever a Veteran or VA employee sets foot in a VA facility, they deserve to know that we have done everything in our power to protect them from COVID-19.”

Roughly 115,000 employees will fall under the VA’s mandate, according to the New York Times, which first reported the decision.

“I am doing this because it’s the best way to keep our veterans safe, full stop,” the secretary told the Times.

The Biden administration has been grappling with how best to push up vaccination rates, which have stagnated in parts of the country despite a surge in cases tied to the highly contagious Delta variant.

Thus far the White House has been wary of top-down approaches, preferring instead to encourage local governments and private businesses to set their own rules around vaccinations.

The VA said four employees have died in recent weeks because of Covid. All of the workers were unvaccinated and at least three died because of the Delta variant. In addition, an outbreak occurred at the VA Law Enforcement Training Center, the third of its kind during the pandemic.

Last week the NFL said that teams experiencing an outbreak among unvaccinated players could be forced to forfeit games, placing a multimillion-dollar financial incentive on teams and their players to get vaccinated.

Also on Monday, New York City Mayor Bill de Blasio separately announced that all municipal employees will have to either be vaccinated or undergo weekly Covid-19 testing. That rule goes into effect citywide on Sept. 13, though it kicks in earlier for public health workers and staff in congregate living facilities.

Similarly, California Gov. Gavin Newsom said Monday that all state employees and health care workers will be required to be vaccinated or face regular testing.

CLARIFICATION: The Justice Department opinion concerning vaccines was released on Monday but was issued on July 6.