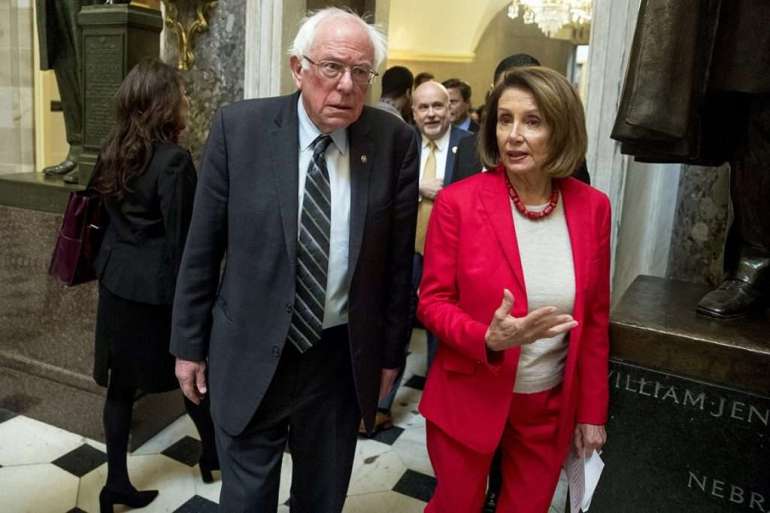 “You’ve got 50 members of the caucus, all of whom have different views and are from different states with different needs. And my job is going to be to try and work it out,” Sanders said.

The episodes underscore the tensions in the Democratic Party as President Joe Biden’s agenda haltingly moves forward. The party will sink or swim together with Democrats’ two-track plan to spend $550 billion in new money on physical infrastructure and then supplement it with their own colossal party-line spending bill on social programs, which will require all 50 Democratic votes to pass the Senate.

But there’s growing worry the complex proposal could quickly turn into a 10-car pileup.

Sanders’ concern is just one piece of the multifaceted internal conflict in the Democratic Party as it rallies around Biden’s $4 trillion domestic spending plan. Once the Senate passes the bipartisan infrastructure plan, a new conflict will immediately replace it: How long should the House wait for its Democratic-only companion bill to arrive before the pressure becomes too much to withstand?

As progressives praise Pelosi and make public threats to sink the bipartisan bill if she buckles, moderates are already urging the speaker to drop her blockade of the upper chamber’s infrastructure deal. It’s a conflict that will test the strength of Democrats’ House and Senate relations, with slim majorities spread out across a large ideological spectrum. And there’s always the danger that the longer the process drags out, the more likely one or both tracks might collapse.

“Strike while the iron’s hot,” said Rep. Elissa Slotkin (D-Mich.), one of the several dozen House centrists who have been pushing for swift action on the Senate deal across the Capitol. “If you get a deal, and if it’s significant money, don’t let it sit. It does not age well.”

Some of that anxiety surfaced this week as Sen. Kyrsten Sinema (D-Ariz.) angered progressives with her concerns about the $3.5 trillion price tag for Democrats’ bill on social programs, even as the Senate prepares to send a bipartisan infrastructure bill she helped negotiate to the House. She’s one of several moderates in both chambers with outsized ability to shave down the package in the coming weeks. That bill can pass without GOP support in the 50-50 Senate, but it would need lockstep Democratic unity in the upper chamber.

And after all 50 Senate Democrats voted to move forward on the bipartisan package Wednesday, other Democrats are ready for “a little more definition about what level of cohesion we’re going to have as a caucus,” said Sen. Chris Murphy (D-Conn.).

Big bills always surface tensions between chambers of Congress. But given Democrats’ ideological divides and their slim margins, the coordination of these two packages is an unusually delicate and fraught task.

“All [Sinema] did is ensure that we don’t have enough trust unless they both move together,” said senior progressive Rep. Mark Pocan (D-Wis.). “We’ve been very clear and Nancy Pelosi has been very clear on that.”

And though Pelosi insisted again this week the infrastructure bill is going nowhere until she has the complementary $3.5 trillion party-line spending bill in hand, too, centrists are already pressuring the California Democrat to move Biden’s infrastructure deal as quickly as she can.

In addition to moderate Democrats’ hand wringing, Republicans have accused Pelosi of holding the bill as “hostage” to the larger package that will spend trillions and raise taxes on the wealthy.

Meanwhile, senators from the progressive wing of the party are urging their House colleagues to stand firm.

“It would be nice if we didn’t need a backstop, that in the Senate we had our own adherence to our priorities among the Democrats. But she’s there,” said Sen. Mazie Hirono (D-Hawaii). “I say: Good. Thank you Nancy.”

The House is set to go on recess for seven weeks starting Friday, though members expect they will need to return for a procedural vote to tee up the Democrat-only spending plan. And Pelosi and her top deputy, Majority Leader Steny Hoyer (D-Md.), said little in private meetings this week about a potential schedule for the House to return from recess to move the Senate legislation, only calling the situation “fluid,” according to people in the room.

In the House, there’s been a precarious accord between the Democrats’ two divergent factions as they await details across the Capitol on the bipartisan plan. But as soon as the Senate passes that bipartisan deal, moderates are planning a full-throttle push for a swift vote.

Both factions agreed that the biggest hurdle ahead for plunging $550 billion in new spending into roads, bridges and broadband was the House.

Democrats in the Problem Solvers Caucus are already growing more vocal in their demands for Pelosi to alter her tactics. And privately, some are discussing whether to band together to block a vote on the budget — stalling the Democratic-only spending bill — until they get what they want.

“I think we made it pretty clear. We want to do the bipartisan bill first,” said Rep. Kurt Schrader (D-Ore.), when asked if moderates would be willing to block a budget vote to pressure Democratic leaders on the Senate deal. “Let’s take something home for the summer that people will be proud of.”

Progressives, however, are certain that Pelosi will not break her pledge. And they say even if she tried, the roughly 100-member Congressional Progressive Caucus could sink the Senate measure on the floor.

“We currently do not have the votes to move the bipartisan bill, unless the reconciliation is moving simultaneously. And the speaker obviously knows that,” said Rep. Ilhan Omar (D-Minn.), who serves as chief vote-counter for the left-wing caucus.

Pelosi’s headache will only grow later this week when her margin in the House shrinks by one more seat. After the GOP winner in this week’s Texas race is seated, House Democrats will only be able to lose three Democrats on any single floor vote.

Both publicly and privately, Pelosi has not veered from her stance that she will not put the Senate bipartisan deal on the floor until after the Senate has passed the sprawling party-line spending plan.

But there is faint hope in some corners of the caucus that Pelosi might clarify her stance to advance a highly popular Biden priority.

“I don’t know that she has issued an ultimatum about that,” said Rep. Matt Cartwright (D-Pa.). “I know she has stated what her preferences are, but I think she has a good sense of the fact that the American people really want to see, at long last, a real infrastructure bill.”

A spokesperson later clarified that Cartwright supports the speaker’s position.