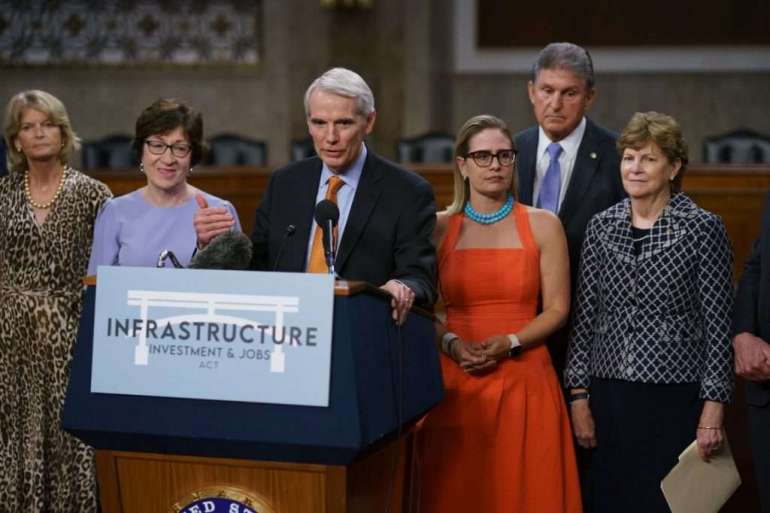 “With the cooperation of our Republican colleagues, I believe we can finish the bipartisan infrastructure bill in a matter of days,” Schumer said, adding that the legislation is a “massive down payment towards rebuilding our nation’s infrastructure” that “ will benefit our economy for years and decades.”

But in a sign that the process is nowhere near over, Friday’s vote was briefly interrupted after a draft of the legislation began to circulate that Republicans did not support. Republicans are asking for assurances from Schumer that the text will be based on the agreement by a bipartisan group of 10 negotiators.

Before the vote, Schumer and Portman spoke by phone and the New York Democrat assured him that he would use the bipartisan group’s language, according to sources familiar with the call. Schumer has previously promised a vote on the bipartisan bill text first.

In a statement ahead of the scheduled vote, Sens. Rob Portman (R-Ohio) and Kyrsten Sinema (D-Ariz.) said the text would be released when it was final. Democratic aides insist that the bipartisan bill will be the eventual legislation that will be voted on.

“When legislative text is finalized that reflects the product of our group, we will make it public together consistent with the bipartisan way we’ve worked for the last four months,” Portman and Sinema said.

Sen. Jeanne Shaheen (D-N.H.), one of the Democratic negotiators, said Friday that broadband remains a problem. “As we’re drafting the language, some issues have come up,” she said.

The delayed vote prompted confusion among senators. Earlier this week, 17 Senate Republicans supported considering the bipartisan agreement. But some said Friday that if the legislative text is not what Portman and Sinema agreed to, they would not vote to move forward.