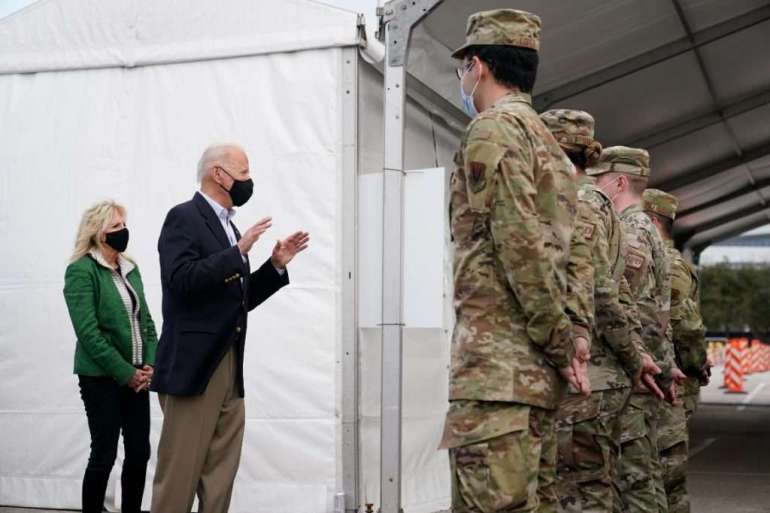 After Biden spoke, the Pentagon on Thursday night released a statement adding that those “who are unable or unwilling” to prove their vaccination status will be “subject to official travel restrictions,” raising questions as to whether it the rule affected deployments. The defense official said that while deployments will continue, the exact details of the unspecified travel restrictions will be addressed in the coming days.

Biden also said a vaccine mandate for troops is on the horizon. He directed Defense Secretary Lloyd Austin to begin meeting with the Joint Chiefs of Staff and the department’s medical professionals to discuss how and when the Pentagon might add the Covid-19 vaccine to the list of required immunizations for the military.

The Pentagon has already been heavily debating whether to require the troops get vaccinated, a second defense official told POLITICO this week. But such a mandate is unlikely to come down soon; spokesperson John Kirby has noted that the vaccine is under emergency authorization and Austin will look at requiring the shot once it receives full FDA approval.

Even before the new federal rules, the services had already taken steps to incentivize troops to get vaccinated. For example, sailors who have gotten the shot won’t have to quarantine before deployment, according to February guidance from the Navy. Vaccinated sailors are also allowed shore leave in countries that allow it.

Over 30 percent of active-duty troops have not been vaccinated, amid a slow-down of vaccinations nationwide.

The Navy has the highest vaccination rate among the services at 72 percent. Navy officials said Friday that the new DoD guidance hasn’t yet affected their deployment guidelines.

In the Marine Corps, some units carried out new policy guidelines allowing vaccinated Marines to use designated fitness centers without a mask, while others offered commands that achieved certain vaccination rates to take additional vacation time, Capt. Andrew Wood said in May.

A total of 59 percent of active-duty Marines are fully vaccinated, while just 21 percent of reserve Marines have received their two shots.

Meanwhile, the Air Force has embarked on a “vaccine campaign,” including posting educational videos, and encouraging base commanders to come up with their own local campaigns to help educate airmen about the vaccine, Air Force spokesperson Lt. Col. Malinda Singleton said in May.

As of this week, 60 percent of Air Force and Space Force active-duty personnel were fully vaccinated, a number that falls to 56 percent when guard and reserve troops are factored in.

In the Army, 62 percent of soldiers are vaccinated.

This week, the White House, State Department and Pentagon reservation have reimposed an indoor mask mandate for all individuals, regardless of vaccination status, as cases of the Delta variant continue to rise across the country.

Paul McLeary contributed to this report.