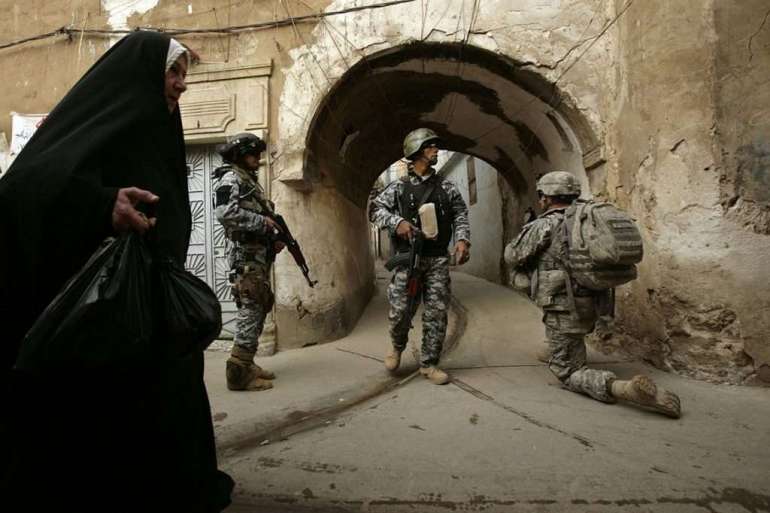 “I mean, this is the most solemn thing we should do. And we’ve just put it on autopilot,” Sen. Tim Kaine (D-Va.) said, referring to Congress’ power to declare war. “And I think the longer you go, the more people are uncomfortable with that.”

The idea has near-unanimous support among Democrats on Capitol Hill; and while most Republicans still believe that the commander-in-chief must preserve any and all existing war authorities, a growing group of GOP lawmakers is backing the repeal efforts. They’re poised to finally put this one over the top after years of falling victim to the Senate’s filibuster rules that require 60 votes to advance legislation.

“This is in part a function of the multi-year education that many of our constituents have received about needing to ensure that members of Congress are attentive to where our troops are, where they’re deployed, how long they’re deployed, and so forth,” said Sen. Todd Young (R-Ind.), who is leading the repeal push alongside Kaine.

The House has already approved separate measures to scrap the outdated authorizations for the use of military force (AUMF), and President Joe Biden has said he supports taking them off the books. Biden’s backing, Kaine said, “has been a real key to this.” The last AUMF repeal passed by both chambers and signed into law came in 1971, when then-President Richard Nixon approved a measure scrapping the infamous Gulf of Tonkin Resolution that paved the way for U.S. involvement in the Vietnam War.

In many ways, the Senate — which has routinely spurned similar AUMF repeal efforts in the past — will be catching up with public opinion, which has long turned against America’s seemingly endless involvement in Middle East wars, especially as the U.S. prepares to mark the 20th anniversary of the Sept. 11 attacks.

“Congress, during the time I’ve been here, has been slowly coming to the realization that we have to own more of the process for starting and stopping wars,” Kaine said. The reality that current operations in the Middle East have relied on a nearly two-decade-old authorization, he added, has “been a sobering realization for folks,” he added.

In the Senate, where all 50 Democrats are expected to support the repeal measures, libertarian-minded Republicans like Sen. Rand Paul of Kentucky are finding themselves a bit less lonely in their own party. Supporters of the effort now have more traditional conservatives on their side, like Sen. Chuck Grassley (R-Iowa), who is a co-sponsor of the Kaine-Young bill.

“Up here it’s been a minority,” Paul said of the Senate. “But I think the public is very supportive.”

Over the years, the House has consistently voted, both in committee and on the floor, to repeal war authorizations through the defense policy or appropriations processes. But those efforts were always stripped out of final packages negotiated with the Senate, where defense hawks out-maneuvered those who pushed for scaling back the president’s war powers.

This year, the repeal measures aren’t likely to be cast aside during the legislative sausage-making process. Once the Senate approves the effort, it will take one of two paths to becoming law: Either the House and Senate will form a conference committee to combine both chambers’ efforts into one bill, or the issue will be resolved during negotiations over the annual must-pass defense policy bill.

Kaine said the defense policy bill is the most likely vehicle to get the repeal measures to Biden’s desk.

Despite the Senate’s filibuster rules, though, the upper chamber has been able to pass war powers resolutions directing the cessation of U.S. involvement in hostilities — votes that require a simple majority, rather than 60 votes. Both the House and Senate in 2019 passed measures to cut off U.S. support for the Saudi-led coalition in Yemen’s civil war, but they were vetoed by then-President Donald Trump and neither chamber could muster the two-thirds necessary to override the veto.

And last year, the Senate passed a resolution to prevent Trump from attacking Iran, again with a simple majority threshold. Eight Republicans supported that bill, which came about after Trump cited the 2002 AUMF as legal justification for the airstrike that killed a top Iranian general, Qassem Soleimani. At the time, Democrats suggested that Trump’s opposition to the measure forced some Republicans to vote against it even if they agreed with the premise that the 2002 AUMF should not apply to Iran.

Trump himself often gave conflicting signals on the issue of war powers, simultaneously railing against “endless wars” during campaign rallies but strongly pushing back against efforts to limit U.S. involvement overseas.

Seven of those who voted for the Iran resolution are still serving in the Senate — and Grassley, who voted against that resolution, has now moved into the yes camp. Sen. Josh Hawley (R-Mo.) also voted against the Iran measure, but told POLITICO that he supports repealing the 2002 AUMF. And Sen. Cynthia Lummis (R-Wyo.), a newly elected member, also said she is likely to vote for it.

“We’ve been adventurous across the world far too long,” said Sen. Mike Braun (R-Ind.), who also plans to support the bill. “So I’m going to be with the folks who want to make sure that we don’t let those linger.”

Most Republicans agree with the premise of the Kaine-Young bill — that the 2002 and 1991 authorizations are no longer necessary for basic operational tasks, including the protection of American troops. But they argue that eliminating a president’s existing authorities could complicate U.S. efforts to respond to future threats.

“The question is, when our troops are gone, what authority do we then have to prevent ISIS or the Taliban from doing things that are awful and outrageous, that would be very much harmful to our friends and allies?” Sen. Mitt Romney (R-Utah) said.

When asked about Congress crafting a new AUMF to meet those challenges, Romney quipped: “Yes, that’s likely to happen when cows fly over the moon.”

At the same time, Republicans’ bid to keep the Iraq authorizations is hardening around the party’s hawkish posture toward Iran, whose proxies have been attacking U.S. forces in Iraq and Syria in recent months. Those attacks have prompted retaliatory strikes by Biden, though the president claimed his Article II self-defense authority to justify those offensives.

As Biden comes under scrutiny from members of his own party for those strikes, Republicans have rushed to defend him. And GOP lawmakers are justifying their opposition to the AUMF repeal measures by seeking to preserve Biden’s ability to attack Iran and its proxy forces inside Iraq and Syria — though the AUMFs only authorized action against the Iraqi government, not specific militant groups based in Iraq. Today, the Iraqi government is a counterintelligence partner, and U.S. troops are there with its permission.

As Republicans look to tout their hard line against Tehran, Sen. Ted Cruz (R-Texas) plans to introduce an amendment to the Kaine-Young bill that would give Biden the authority to retaliate against Iran more directly.

That amendment is expected to fail mostly along party lines in the Democrat-led committee. But it’s another example of how Republicans are portraying Biden as weak toward Iran, especially as the administration seeks a revived nuclear agreement with the regime.

“I worry that this debate is being pushed by the Democrats as part of the Biden administration’s pivot toward Iran, and ill-advised intention to re-enter into the disastrous Obama Iran nuclear deal,” Cruz said in a brief interview.