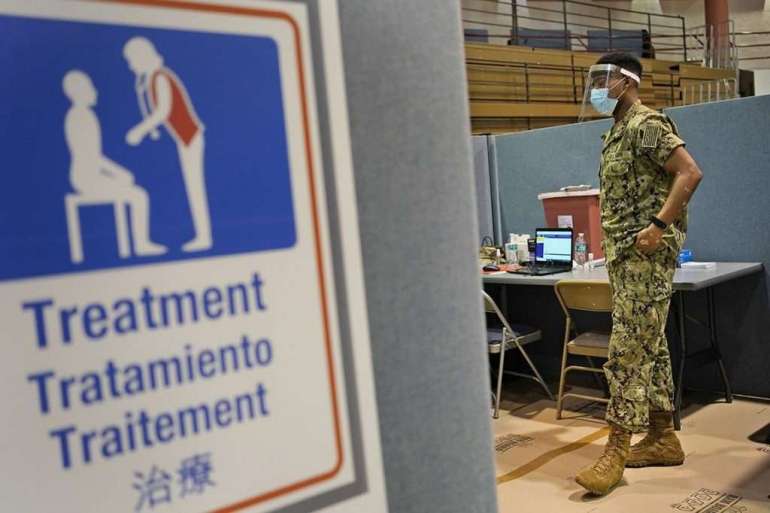 If infections continue to spike however, “I will not hesitate to act sooner or recommend a different course to the President if l feel the need to do so,” the secretary warned.

The move also follows Biden’s directive that the Pentagon examine how and when it could mandate the shot for the military. The president last month mandated all federal workers either get the vaccine or submit to frequent testing and travel restrictions.

DoD officials have made several calls to key lawmakers in recent days to gauge support for the mandate, according to a congressional source and a senior administration official familiar with the talks.

In particular, DoD is concerned about service members of color who may be reluctant to take the vaccine, one of the people said. Black and Hispanic communities were hit harder by the pandemic, but those areas have lower vaccination rates than white communities, partially due to a deep mistrust of health authorities.

Pentagon spokesperson John Kirby did not deny that discussions with lawmakers had taken place, but said there has been no effort on behalf of the secretary or the department “to solicit support from members of Congress for mandatory vaccination efforts.”

Over 30 percent of active-duty troops have not been vaccinated.

In a statement from the White House Monday, Biden said he would “strongly support Secretary Austin’s message to the Force” that would “add the COVID-19 vaccine to the list of required vaccinations for our service members not later than mid-September.”

About 73 percent of the overall active-duty force has already been vaccinated, but for the holdouts who may continue to refuse after the order is given, there will likely be some form of discipline.

Kirby told reporters at the Pentagon pn Monday that he doesn’t know what that might consist of. But Austin “has full confidence that service leadership and commanders are going to implement the new vaccination program with professionalism, skill, and with compassion.”

Rep. Adam Smith (D-Wash.), chair of the House Armed Services Committee, issued a statement supporting the push to vaccinate, saying “some may try and criticize the Secretary’s decision, using anti-vax arguments that are not supported by facts or science to politicize the conversation. These desperate attention seekers must be ignored.”

The Republican ranking member of the committee, Rep. Mike Rogers (R-Ala.), issued his own statement, saying, “we must not allow COVID-19 to be a hindrance on our force,” adding that the number of troops already vaccinated is “encouraging news and I hope that number reaches 100% quickly.”

The Biden administration’s caution in handling the mandate may be rooted in the legal challenges the Pentagon faced when it mandated the anthrax vaccine for troops in the 1990s before it was fully FDA approved.

At the time, many troops refused to take the vaccine. Several filed lawsuits asserting the Pentagon could not require a vaccine that had not been fully licensed, in one instance forcing the department to stop the program. Eventually the FDA approved the vaccine, and the Pentagon reinstated the mandate for troops in certain high-risk locations.

The military requires a number of vaccines for all recruits, including influenza, measles, mumps, polio, tetanus and yellow fever.

Austin’s memo reflects similar decisions taken by governments and private companies around globally, as the world again struggles with the spread of the highly contagious Delta variant that has sent new U.S. cases, hospitalizations and deaths surge to levels not seen since the winter months.

In response, the White House, State Department and Pentagon reservation had all reimposed indoor mask mandates for all individuals regardless of vaccination status.

As of late July, the Navy was leading the services in vaccination rates, with 72 percent of the force having already had both shots. The Army follows close behind with 62 percent of soldiers being vaccinated while 60 percent of Air Force and Space Force active-duty personnel are fully vaccinated, a number that falls to 56 percent when guard and reserve troops are factored in.

A total of 59 percent of active-duty Marines are fully vaccinated, while just 21 percent of reserve Marines have received their two shots.

Paul McLeary and Erin Banco contributed to this report.