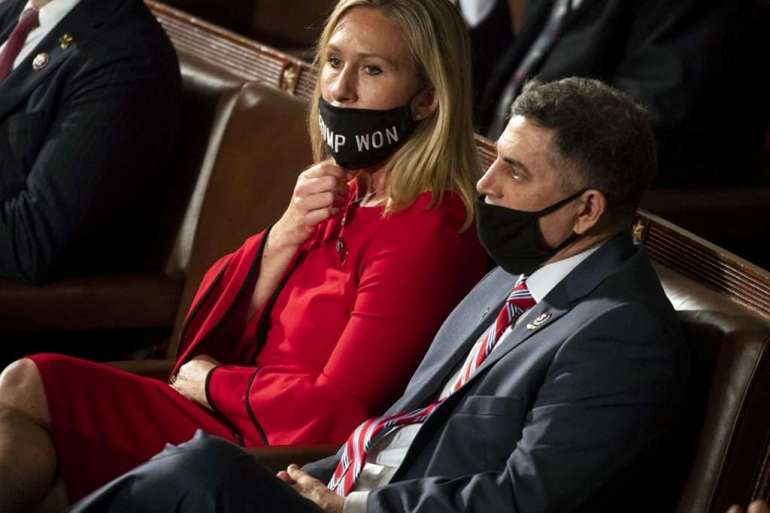 Wiest not only faced a so-called disgorgement order from the SEC over that purchase — a sanction that requires anyone who benefits from improper acts to give up profit stemming from that activity — but he was also suspended from practicing law by both the Ohio and Kentucky bar associations for two years as a sanction for his actions.

Records show that the Kentucky-based Wiest ultimately paid the SEC more than $115,000, a sum that includes civil penalties, and was reinstated in 2018 by both bar associations. His past punishment could prove politically relevant, however, as the trio of House Freedom Caucus members lean on Wiest to challenge a Pelosi-instituted requirement that members wear masks on the chamber floor — or face potential fines if they violate that mandate.

Wiest, whose current practice includes constitutional and business law, said in a statement that his law license is in “good standing” in every state where he is admitted to the bar. He suggested that the SEC investigation he faced may have been politically motivated, adding that “perhaps it is just a coincidence” it arose while he was “involved in a highly contentious judicial speech case affecting every judicial campaign in the Sixth Circuit, including races in Ohio and Kentucky.”

“To be clear, and as is relevant to the present lawsuit, I was hired by my clients to handle this litigation, because, for the past year and a half, I have successfully handled about half a dozen cases involving Covid-19 mandates, in both federal and state court,” Wiest added in his statement. Among the cases he cited was a successful challenge to a Kentucky restriction on in-person religious services during the pandemic.

Massie said in a statement that “I hired Chris because in the last year and a half he has filed half a dozen Covid mandate cases against the government in federal and state court, and has won a majority of them, including one case that has been cited repeatedly by the U.S. Supreme Court.”

Spokespeople for Taylor Greene and Norman did not respond to a request for comment. Wiest filed a lawsuit in late July on behalf of the three lawmakers after they lost an appeal of their fines before the House Ethics Committee.

Their court challenge to Pelosi argues that the speaker’s mask requirement violates the 27th Amendment, which prevents members of Congress from updating their compensation with new laws in the midst of a two-year term.

“Nancy Pelosi did this by edict. There’s no law,” Massie said at a press conference announcing the lawsuit. “She changed this rule on her own. She did it unconstitutionally.”

Wiest and his clients also argued that those who enter the lower chamber without masks are protected by rules governing their official speech.

“If this were about safety (or if they believed they were needed for safety), and not virtue signalling, masks would have been required everywhere in the House, not just in the chamber where there are television cameras,” Wiest wrote on Facebook.

The mask requirement applied to House office buildings and other areas beyond the chamber when Pelosi announced it last year as the coronavirus pandemic ravaged the country and the economy. House Democrats later voted to establish a rule that would subject lawmakers to a $500 fine for a first offense of refusing to wear a face covering and $2,500 for subsequent offenses.

Most House Republicans complied with the earlier health guidance, wore masks on the House floor and got vaccinated. Nonetheless, some hardline Republicans — like Massie and Taylor Greene – refused to wear masks, and others have declined to affirm their vaccination status.

The House mask rule was later lifted after the Centers for Disease Control and Prevention issued new guidance in May that said vaccinated individuals were no longer required to wear a mask indoors. The three Republicans who have sued Pelosi were fined before the rule was lifted.

But as the new and more contagious Delta variant of the virus spread this summer, the Biden administration reversed its mask guidance and the mandate for face coverings returned in the House last month — sparking a renewed culture war in the halls of Congress between the two parties.

Republicans who chafe at the mask rule argue that it sends the wrong message to those already inoculated against Covid and fuels vaccine hesitancy, particularly as surveys show their party’s supporters are less likely to get the coronavirus vaccine than Democrats’. All House Democrats have stated publicly that they have received the vaccine.

Democrats, meanwhile, argue that Republicans are endangering their colleagues’ health at a time when the virus is posing a renewed risk.

Following the reinstated mask mandate last month, dozens of House Republicans entered the House chamber without a face covering in protest of the rule returning, dismissing the idea of fines.

Correction: A previous version of this article reported that Wiest was court-martialed by the U.S. Air Force Academy, but did not note that the court martial was overturned on appeal. Wiest was honorably discharged.