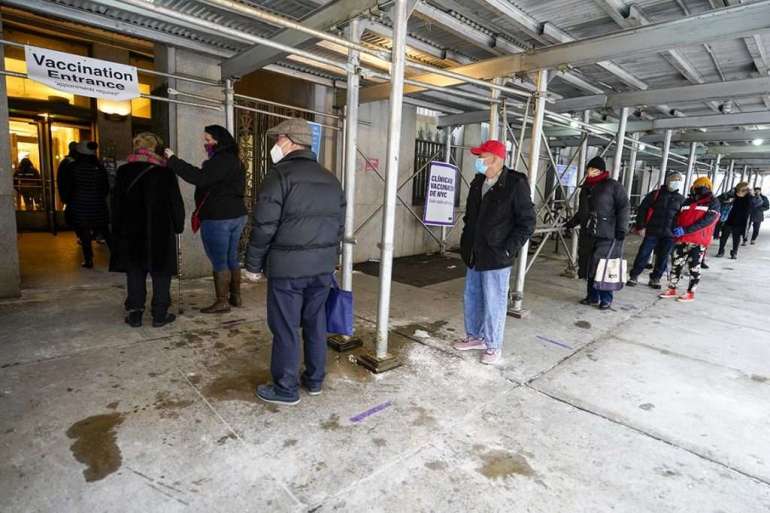 “I think individual entities — whether it’s school board, local government or businesses — all have their own concern to keep their employees, students in the case of schools, and customers in the case of businesses, safe,” said Sen. Mike Braun (R-Ind.). “When you get that, it works much more effectively than trying to do anything from the top down.”

Washington, the private sector and many state and local officials are wrestling with how to ramp up the pace of vaccinations, as the highly contagious Delta variant surges, particularly in undervaccinated areas. Demand for shots has increased over the last month in states with low vaccination rates, but public health officials worry the renewed interest will soon fade.

A Biden administration official didn’t rule out the idea of withholding federal funds from certain institutions, but cautioned that discussions are in the early stages. The conversations are part of a politically charged debate over mandating coronavirus vaccines with roughly nine states barring the requirements in certain settings.

The Washington Post first reported that the administration was considering the move on Thursday. The next day, press secretary Jen Psaki didn’t knock down the idea of withholding federal funds from certain institutions — such as nursing homes — when asked, adding that the White House was weighing a range of options to spur vaccinations. The White House declined to comment for this story.

The Biden team is eyeing ways to potentially mandate health facilities require immunizations for employees, as a wave of medical groups urge health care systems to require the shots, according to two sources with knowledge. The administration is, among other measures, exploring using Medicare conditions of participation to push hospitals to mandate vaccination for their staff members, the sources said. One of the sources — a senior medical leader — said there is support for some type of federal mandate, but that health facilities are concerned with tying such a requirement to allowing a health system to get payments from Medicare.

“We’re going to make decisions from the federal government that we believe will save lives and we believe will protect the most vulnerable populations, that will incentivize more people getting vaccinated and bring an end to the virus,” Psaki said Friday, adding any efforts to withhold federal funds wouldn’t apply to cruise lines or universities. “There are pros and cons to many of these policies; that’s part of the discussion as well.

“There’s nobody else who’s going to pay for those real costs of care,” said Katie Smith Sloan, LeadingAge’s president and CEO.

At least one GOP governor — Mississippi’s Tate Reeves — argued in a statement that the Biden administration “lacks the legal and moral authority” to do so.

But some Democrats and other experts believe the move holds the potential to boost national vaccination rates, arguing that the federal government has the power and discretion to spend federal dollars and to set conditions for receiving funding.

“‘That can be a very effective tool that [the] president hasn’t used yet,” said Lawrence Gostin, who heads Georgetown University’s O’Neill Institute for National and Global Health Law.

While some Republicans are fiercely against any coronavirus vaccine mandates, others say they’re open to requirements driven by the private sector.

Hutchinson, the chair of the National Governors Association, said he’s skeptical of federal efforts that would include financial penalties.

Yet, the notion of vaccine and mask mandates has become increasingly politicized, and some local leaders are openly flaunting Republican-led bans.

“The problem with the potential financial penalty from the federal government is, you just have to be a little bit careful that that doesn’t end up harming companies or states or whoever it’s aimed at,” said Marcus Plescia, the chief medical officer at the Association of State and Territorial Health Officials. “You want to be careful that it doesn’t harm them when they don’t have any control,” such as when a state government bars vaccine requirements.

Meanwhile, vaccine requirements have increased in recent weeks. The Biden administration is requiring federal employees to get Covid-19 vaccines or be subjected to regular testing. The Pentagon is seeking to mandate the vaccine for 1.4 million troops. And states, like Maryland, are requiring certain state workers receive coronavirus shots or get tested regularly.

Public health experts and elected officials are pinning their hopes that some Americans hesitant of the vaccine will decide to get the shot once it gains full approval from the FDA, which could come as soon as next month.

“We’re very close to full FDA approval and I think that’s going to move the needle for a lot of people,” said Sen. Roger Marshall (R-Kansas), who is skeptical of vaccine mandates.

Sarah Owermohle and Alice Ollstein contributed to this report.