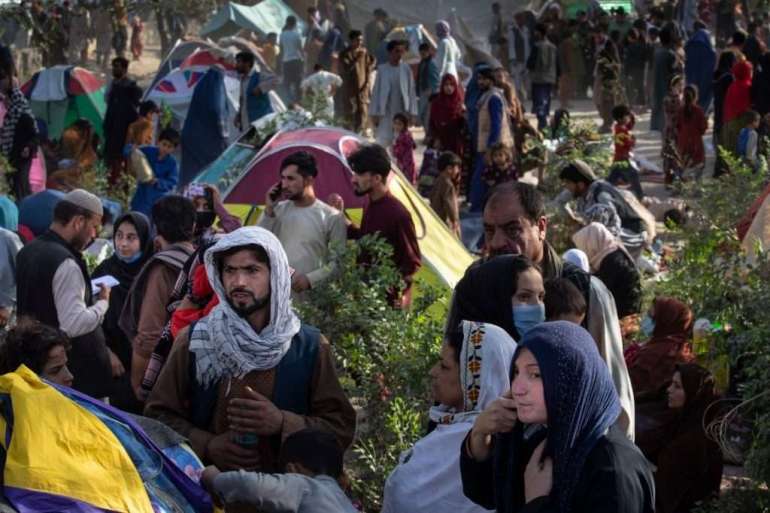 The president, meanwhile, is holding firm to last spring’s decision to withdraw U.S. combat troops, calculating that war-weary voters would rather tune out the alarming developments in a conflict they’ve largely ignored.

“I do not regret my decision,” Biden told reporters Tuesday, after pointing out that the U.S. has spent more than a trillion dollars and lost thousands of its own troops to train and equip Afghanistan’s military.

“Afghan leaders have to come together,” he said. “They’ve got to fight for themselves, fight for their nation.”

It’s a message the White House, the Pentagon, the State Department and others are publicly stressing now after years of private pressure on Afghan leaders, many of whom had hoped the U.S. would never follow through on pledges to leave.

Biden administration officials say the U.S. has better intelligence and other enhanced capabilities to thwart any future terrorist plots against America that might emerge from Afghanistan, where Osama bin Laden once planned the 9/11 attacks. They also stress that the U.S. will continue to offer humanitarian aid for Afghans and financial support for the Afghan military, including, for now at least, air support.

But those promises are not entirely reassuring to many on Capitol Hill and beyond. Some critics fear a reprisal of what happened in Iraq after the U.S. withdrew troops in 2011: the rise of the Islamic State, which forced Washington to send troops back in to fend off the terrorist group.

Some of the latest reports say the Taliban control 65 percent of Afghan territory already. The Islamist militia, whose oppressive, misogynistic rule in the 1990s is still fresh in the minds of many Afghans, has recently captured several provincial capitals.

Those cities include Kunduz, a prize that tightened the Taliban’s grip on Afghanistan’s north. The militants have traditionally had their power base in the south, and their northern advances have alarmed Afghan leaders.

Videos posted online Wednesday showed Taliban fighters driving captured Humvees through Kunduz and posing next to an Mi-24 helicopter gunship at the airfield there after hundreds of Afghan troops fled, in another embarrassing blow for the government.

A new U.S. military assessment says the national capital, Kabul, could fall to the Taliban in as quickly as a month, a person familiar with the intelligence told POLITICO. The person added that capturing the whole city could take longer, six months or more, and that the situation is “fluid.”

Details of the assessment, which included analysis from multiple military and intelligence units, were first reported by The Washington Post.

According to three people knowledgeable about the situation, internal administration discussions have broached evacuating the U.S. Embassy in Kabul as a possibility; one person said the mission could be emptied by the end of this month.

A State Department official didn’t deny an evacuation is an option under consideration, stressing that there are regular, ongoing threat assessments at the embassy. “Our posture has not changed,” the official said.

In a blunt assessment, Afghan Foreign Minister Mohammed Haneef Atmar said Wednesday that his government is “probably experiencing the most massive, brutal and opportunistic military campaign of violence and terror, by the Taliban, in the history of our country.”

The U.S. has stepped up airstrikes — at least in the short-term — to include B-52 bombers and AC-130 gunships, which can deliver devastating precision firepower in small areas. The Afghan air force has also stepped up operations, though reports suggest the aircraft are being flown at rates that will likely prove unsustainable over a long period of time.

The Pentagon has the authority to continue those airstrikes though the end of the American military’s drawdown at the end of this month, but it’s unclear if those strikes will continue come Sept. 1.

The Afghan air force, consisting of 162 aircraft, is being stretched by round-the-clock strikes and surveillance missions from Kandahar in the south to Kunduz in the north, and is being maintained by a skeleton crew of a few hundred Western contractors and smaller crews of Afghans, sometimes tutored over Zoom in fixing airplanes and helicopters.

The White House has suggested it is confident that Afghan forces are getting the support they need.

“Ultimately, our view is that the Afghan National Security Defense Forces has the equipment, numbers, and training to fight back, which will strengthen their position at the negotiating table,” Psaki said Tuesday. “We believe there’s a political process — that’s the only process that will successfully bring peace and stability to Afghanistan.”

In theory, the political discussions between Taliban leaders, Afghan government officials and the United States continue in Qatar. U.S. special envoy Zalmay Khalilzad has been in Doha this week, in hopes of convincing the Taliban not to take Afghanistan by force.

In the meantime, Afghan President Ashraf Ghani, who has said his country faced an “1861 moment, like President Lincoln,” appears to be prepping for an all-out civil war.

Ghani this week visited the northern city of Mazar-e-Sharif, where he met with prominent warlords. Those warlords included Abdul Rashid Dostum, an ethnic Uzbek famed for his own human rights abuses who nonetheless has previously served as an Afghan vice president. The Afghan government is encouraging popular militias to band together to fend off the Taliban advances.

Some analysts say the Biden administration needs to go ahead and impose economic sanctions on Taliban leaders while pushing for travel restrictions on them. That will get across the message that the militia’s leaders risk being global pariahs if they try to take over the country by force, said Lisa Curtis, a former top U.S. official who dealt with Afghanistan.

She argued that the U.S. had to make such moves even though in the past the Taliban have not shown much regard for what the world thinks of them.

“Right now, there’s no consequences for what they’re doing,” Curtis said. “If we want to prevent a bloodbath, prevent revenge killings and further atrocities against civilians, I think we do need to take action now … because the ground is shifting so quickly it seems like we need to move into preventative mode.”

Some of the fiercest advocates for pulling the plug on the U.S. military operation admit they are surprised at how quickly the country is unraveling as foreign troops depart.

“My guess is it is a surprise to the Taliban as well,” said Will Ruger, who was former President Donald Trump’s choice to be ambassador to Afghanistan and is vice president of Stand Together, a philanthropy that supports organizations advocating a noninterventionist foreign policy.

Others in his camp agreed.

Among them is retired Army Lt. Col. Daniel Davis, an Afghanistan veteran who has been lobbying for more than a decade to withdraw American combat troops. He insisted the pace at which the Afghan security forces have crumbled only underscores the futile nature of banking on a corrupt government in Kabul to stabilize the country.

“Now you are seeing the bitter fruit,” said Davis, who is now a senior fellow at Defense Priorities, a think tank that advocates for diplomacy over military force. “We keep lying to ourselves and perpetuating the myth we are accomplishing something. Now it is exposed.”

Bryan Bender and Lee Hudson contributed to this report.