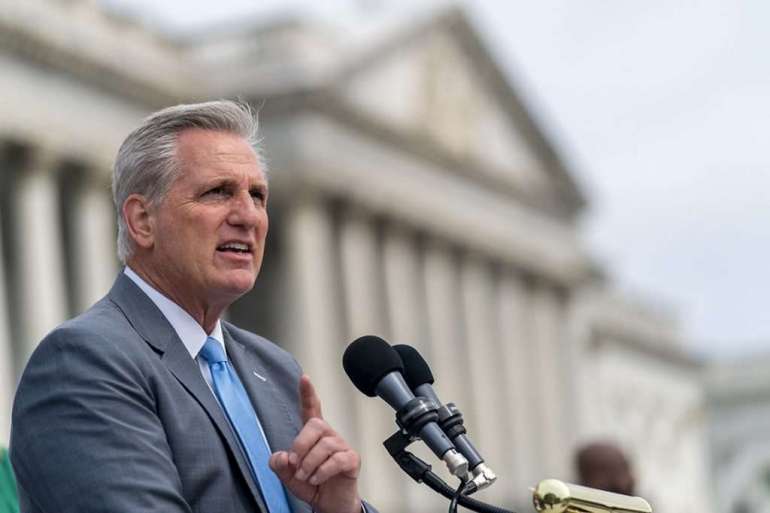 McCarthy — who was largely quiet about former President Donald Trump’s efforts to broker a peace deal with the Taliban during his presidency — then warned about potential risks here in the U.S.: “We have to look to our own border. Are we secure at home over the coming weeks?”

The outburst from McCarthy came on a nearly hour-long call with Secretary of State Antony Blinken, Secretary of Defense Lloyd Austin and Chairman of the Joint Chiefs of Staff Mark Milley. The briefing, which was unclassified, took place just moments after officials confirmed the Afghan president fled the country — lawmakers’ first chance to hear directly from White House officials since Taliban began recapturing key Afghan areas.

As the call was going on, the Afghan government was on the brink of full collapse, with the Taliban in the process off seizing Kabul, the country’s capital, and U.S. officials preparing to shutter its embassy there.

In response to the GOP criticisms, Austin pointed to the weak resolve of the Afghan military to fight off the terrorist group, remarking that they “can’t buy will and can’t purchase leadership,” according to people on the call. These remarks however angered Republicans listening to the call like Rep. Mike Waltz (R-Fla.), who served in Afghanistan, who saw the administration blaming their policy failure on Afghans who fought and died alongside U.S. forces throughout the course of the war.

Speaker Nancy Pelosi — who began her remarks by thanking Biden for his “clarity of purpose” — raised additional questions about the treatment of Afghanistan women and how the U.S. was working with non-governmental organizations that remained in the country, according to sources on the call.

Blinken said he could not give answers on the unclassified call, but would follow-up on a secure line, a response that further incensed Republicans.

One other House GOP lawmaker spoke up on the call, Rep. Peter Meijer (R-Mich.), an Army veteran. Meijer pressed officials whether there is enough fuel for all the flights evacuating U.S. officials, citizens and allies from the encroaching Taliban advance.

Sunday’s briefing for House members — which was followed by an identical briefing for senators — is only the first chance for lawmakers to press the Pentagon for answers about the deteriorating situation on the ground in Afghanistan. Lawmakers are also scheduled to receive a classified briefing when the House returns the week of Aug. 23.

Still, several GOP lawmakers, including McCarthy, have complained they’ve received almost no information about the strategy, and didn’t have enough time to ask questions on the call.

Cheney, for whom the war in Afghanistan is part of her family’s political legacy, said the U.S. had failed the people of Afghanistan — and that its recent actions would make the nation’s allies doubt whether they can trust the United States.

“It’s not just that people predicted this would happen; everyone was warned that this would happen. We’ve now created a situation where as we get to the 20th anniversary of 9/11, we are surrendering Afghanistan to the terrorist organization that housed al Qaeda when they plotted and planned the attacks against us,” Cheney said on ABC’s “This Week.”

One day earlier, Cheney blamed both Biden and Trump for the current crisis in Afghanistan.

“The Trump/Biden calamity unfolding in Afghanistan began with the Trump administration negotiating with terrorists and pretending they were partners for peace, and is ending with American surrender as Biden abandons the country to our terrorist enemies, “she tweeted.

Cheney’s father, Dick Cheney, was vice president in 2001 when the U.S. launched an invasion of Afghanistan in response to the Sept. 11 attacks on the United States. That invasion ousted the Taliban and drove Osama bin Laden and al Qaeda into the mountains of Pakistan, though the Taliban was able to regroup and extend fighting over the next two decades. Bin Laden was assassinated by U.S. forces in Pakistan in 2011.

Twenty years of U.S. support had failed to provide stability or prosperity to the Asian nation, nor extinguished the threat from the Taliban. But Cheney said that those who claim the U.S. departure from this war was overdue because total victory was never going to be attainable didn’t see the situation correctly.

“This is not ending the war. What this is doing actually is perpetuating it,” she argued.

David Cohen contributed to this report.