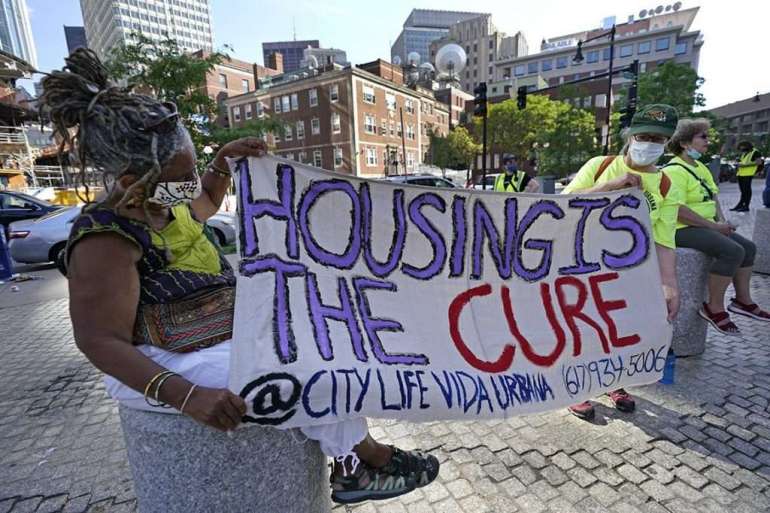 “Congressional Democrats have not and will not ever accept a situation of mass evictions,” Pelosi said in a statement, adding that the high court decision was “arbitrary and cruel.”

Thursday night’s Supreme Court ruling blocking the Centers for Disease Control and Prevention’s eviction ban thrust the issue back on to Congress’s to-do list, though it appeared unlikely that lawmakers would be able to rally support to enact new protections. The Biden administration imposed the moratorium earlier this month — after first citing concerns about its legality — because House Democrats were unable to drum up the votes to put the policy into law.

“If there were enough votes to pass an eviction moratorium in Congress it would have happened,” Psaki said. “It hasn’t happened.”

A little over 8 million people reported they were not caught up on rent in the most recent U.S. Census Bureau survey, conducted from Aug. 4 to Aug. 16. Of those, about 3.5 million tenants said they were “very likely” or “somewhat likely” to face eviction in the next two months.

Eviction ban advocates in Congress would likely face insurmountable hurdles if they tried to revive the moratorium. More than a dozen House Democrats resisted legislation to reinstate an earlier version of the ban in late July. Republicans would probably block a bill in the Senate.

Even with the long odds, more than 60 House Democrats on Friday sent a letter pressing Pelosi and Schumer to act with “the highest levels of urgency” to extend the eviction moratorium as part of an upcoming must-pass bill. Reps. Ayanna Pressley (D-Mass.), Cori Bush (D-Mo.) and Alexandria Ocasio-Cortez (D-N.Y.) were among those who led the letter. Moderates including Reps. Gregory Meeks (D-N.Y.) and Adam Schiff (D-Calif.) also signed the request, which cited the threat from a recent surge in coronavirus cases thanks to the Delta variant.

“Millions of people who are currently at risk for eviction, housing insecurity, or face becoming unhoused desperately look to their elected representatives to implement legislation that will put their health and safety first and save lives,” they said.

Pelosi said in a letter to colleagues Friday that House Financial Services Chair Maxine Waters (D-Calif.) was looking at ways to expedite the flow of rental assistance by state and local governments. Spokespeople for Waters did not respond to a request for comment.

The distribution of $46.5 billion in rental assistance authorized by Congress since December has been plagued by severe bottlenecks. State and local governments had used just over 10 percent of the federal funds as of the end of July, Treasury reported this week.

Bush, who signed Friday’s letter, was instrumental in pressuring Biden to bring back the moratorium earlier this month after the previous iteration expired July 31. She led a sit-in on the Capitol steps to protest its expiration.

“I urge my colleagues to reflect on the humanity of every single one of their unhoused, or soon to be unhoused, neighbors, and support a legislative solution to this eviction crisis,” she said Thursday.

Yellen, Garland and Fudge also pressed the officials to work with courts to require landlords to apply for emergency rental assistance before evicting and to pause eviction proceedings while applications for aid were pending.

“Effective and comprehensive policies to prevent unnecessary evictions have never been more urgent,” they said.

Another five states — Connecticut, Massachusetts, Oregon, Vermont and Washington — have policies protecting tenants who have applied for rental assistance. Nevada allows an application to be used as a defense that can stop an eviction if the tenant raises it. Colorado, Maine, Michigan and Texas require a landlord to give notice to tenants of rental assistance resources.

The Supreme Court on Thursday night suspended the CDC’s latest moratorium more than five weeks before its scheduled Oct. 3 expiration. Two chapters of the National Association of Realtors petitioned the high court earlier this month to immediately overturn the latest version of the ban, saying the original moratorium imposed last September had cost landlords billions of dollars a month.

The court’s majority said allowing an eviction ban on public health grounds would give the CDC almost unlimited authority.

“Could the CDC, for example, mandate free grocery delivery to the homes of the sick or vulnerable? Require manufacturers to provide free computers to enable people to work from home? Order telecommunications companies to provide free high-speed Internet service to facilitate remote work?” the court’s majority said in the ruling.

Three of the Supreme Court’s Democratic appointees dissented in the ruling.

Rep. Patrick McHenry (R-N.C.), the top Republican on the House Financial Services Committee, said Friday that “Republicans knew months ago the CDC had exceeded its authority” when it imposed the bans under the Trump and Biden administrations.

“Instead of fixing the flawed Emergency Rental Assistance program to provide support to families in need, the Biden administration extended its unconstitutional eviction moratorium,” McHenry said in a statement. “This shortsighted move did absolutely nothing to help renters or address the administration’s mismanagement of $46 billion in aid, nearly 90 percent of which has yet to be distributed.”