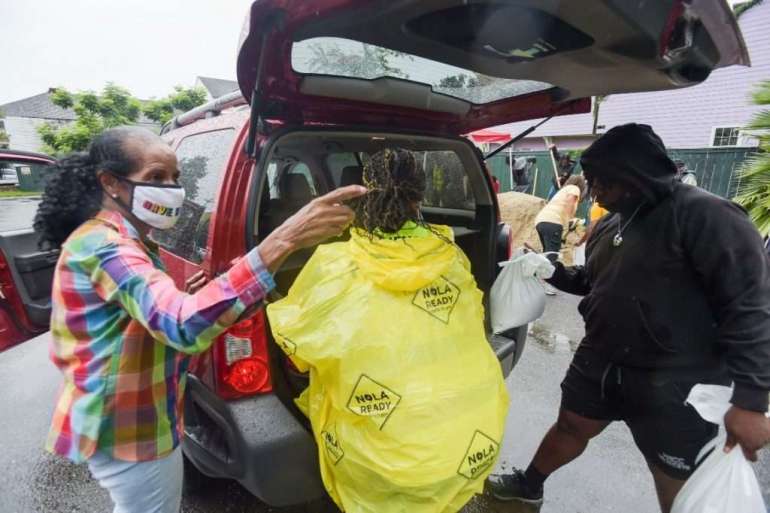 “We’re going to catch it head-on,” said Bebe McElroy as she prepared to leave her home in the coastal Louisiana village of Cocodrie. “I’m just going around praying, saying, ‘Dear Lord, just watch over us.’”

Ida was poised to strike Louisiana 16 years to the day after Hurricane Katrina devastated the Mississippi and Louisiana coasts. A Category 3 storm, Katrina was blamed for 1,800 deaths and caused levee breaches and catastrophic flooding in New Orleans, which took years to recover.

Edwards said 5,000 National Guard troops were being staged in 14 parishes for search and rescue efforts with high-water vehicles, boats and helicopters. And 10,000 linemen were on standby to respond to electrical outages.

A tropical depression two days earlier, Ida was strengthening so quickly that New Orleans officials said there was no time to organize a mandatory evacuation of the city’s 390,000 residents, a task that would require coordinating with the state and neighboring locales to turn highways into one-way routes away from the city.

New Orleans Mayor LaToya Cantrell called for a voluntary evacuation and reiterated Saturday that the time to safely leave was growing short. City officials also were preparing to open shelters for anyone displaced by the storm. They also warned those who stayed to be prepared for long power outages amid sweltering heat in the days ahead.

Ramsey Green, the city’s top infrastructure official, stressed that the levee and drainage systems protecting the city have been much improved since Katrina.

“That said, if we see 10 to 20 inches of rain over an abbreviated period of time, we will see flooding,” he said.

In Washington, President Joe Biden called Ida “very dangerous” and urged Americans “to pay attention and be prepared.” He spoke Saturday at the start of a virtual briefing with Federal Emergency Management Agency administrator Deanne Criswell on storm preparation.

“We were willing to wait it out but the hotel said we had to leave,” said visitor Lays Lafaurie of Fort Worth, Texas, waiting in a rental car line at the city’s airport. “They said we had to leave by 7 tomorrow morning. But if we’d waited that long there wouldn’t have been any cars left.”

Ida posed a threat far beyond New Orleans. A hurricane warning was issued for nearly 200 miles of Louisiana’s coastline, from Intracoastal City south of Lafayette to the Mississippi state line. A tropical storm warning was extended to the Alabama-Florida line, and Mobile Bay in Alabama was under a storm surge watch.

Alabama Gov. Kay Ivey declared a state of emergency Saturday for the state’s coastal and western counties, warning Ida could bring flooding and tornadoes there.

In Mississippi, Gov. Tate Reeves urged residents to stay off of interstate highways to make room for people fleeing Louisiana. He said 19 shelters had opened to take in evacuees. Several casinos on the Mississippi coast had closed ahead of Ida.

Meteorologist Jeff Masters, who flew hurricane missions for the government and founded Weather Underground, said Ida is forecast to move through “the just absolute worst place for a hurricane.”

“”There’s hundreds of major industry sites there, I mean petrochemical sites, three of the 15 largest ports in America, a nuclear power plant,” Masters said. “You’re probably going to shut down the Mississippi River for barge traffic for multiple weeks.”

Phillips 66 said it was shutting operations at its refinery in Belle Chasse, Louisiana, based on Ida’s projected path.

Many gas stations in and around New Orleans were out of gas, and the few still open had lines more than a dozen cars deep.

Mike Laurent of Marrero, Louisiana, was filling up about a dozen gas canisters to fuel his generator and those of friends and family. Laurent said he and his family will be riding out the storm at home despite concerns about whether the nearby levee would hold. It was reinforced after Katrina in 2005.

“I don’t think it’s ever been tested like it’s going to be tested tomorrow or Monday,” Laurent said. “I bought a dozen life jackets, just in case.”

By Saturday afternoon, Ida was a Category 2 hurricane with maximum sustained winds of 105 mph. The storm was centered about 325 miles southeast of coastal Houma, Louisiana, and was traveling northwest at 16 mph.

In New Orleans, city officials said residents need to be prepared for prolonged power outages, and asked elderly residents to consider evacuating. Collin Arnold, the city’s emergency management director, said the city could be under high winds for about 10 hours.

Some ordinarily bustling businesses were closed Saturday. One popular breakfast spot was locked up tight with sandbags against the door to guard against flash floods.

Cuba started to clean up Saturday after Ida tore through Isla de la Juventud and then western parts of the mainland. The storm toppled trees and damaged crops and buildings. There were no reported deaths.

CORRECTION: A previous version of this report misstated the name of Louisiana Gov. John Bel Edwards.