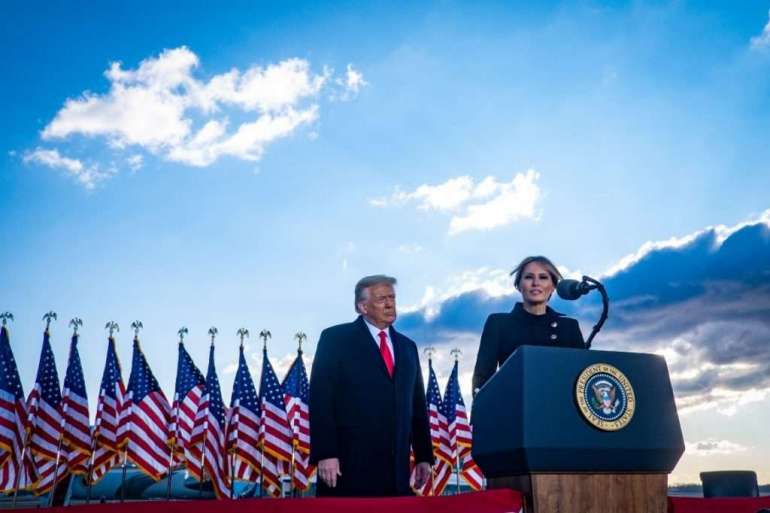 In the months following her family’s messy exit from the White House, the former first lady has spent her time tucked away at Trump’s Mar-a-Lago and Bedminster clubs with family, occasionally appearing at her husband’s side. Though the former president is widely perceived to operate out of political self-interest, those close to him say his wife could impact his decision to take on the exhausting and very public role of candidate again.

“The only thing that Trump cares about these days is golf and Melania. And if she doesn’t want him to run, then it’s going to be pushing a big rock up the hill,” said a person close to Trump. “I don’t think politics is her thing. She doesn’t like the game.”

Ever since the Trumps glided down the escalator at Trump Tower to announce a 2016 run, Melania Trump has been a difficult-to-read partner in her husband’s political maneuverings. She rarely appeared on the campaign trail and, as first lady, kept largely out of public view.

The perception created by her private nature — that she didn’t actually approve of her husband’s conduct — was contradicted by the few occasions when she did emerge. She famously wore an “I REALLY DON’T CARE” jacket on the way to visit a detention center that held young child migrants. And she was secretly recorded by her former confidant Stephanie Winston Wolkoff saying “who gives a f— about the Christmas stuff and decorations” in 2018.

The ending of her husband’s term underscored her discomfort with the national political stage. According to her former chief of staff Stephanie Grisham, Melania Trump spent part of election night 2020 asleep as her husband fretted over vote counting and network coverage while huddled with advisers at the White House.

“I knocked a few times, quietly at first but louder at each attempt,” wrote Grisham, according to new material from her forthcoming book titled “I’ll Take Your Questions Now: What I Saw at the Trump White House.” “I finally opened the bedroom door only to find that Melania Trump was sound asleep.”

Melania Trump and Grisham had been at former President Trump’s Mar-a-Lago club the night before. They had been up late to prepare for election night and up early to vote and then flew back to Washington, D.C. But Grisham was still surprised that she went to bed.

“I knew by now how much sleep meant to her, but still, I couldn’t imagine being asleep at a time like that,” she wrote. “Maybe she thought that someone would wake her up if Trump won.”

Melania Trump did eventually wake up and was on the stage with her husband in the East Room at 2:30 a.m. as he falsely said he had won the election and that it was being stolen from him because of fraud. A spokesperson for Melania Trump had no comment on the new excerpts of the book. Another former White House aide understood the former first lady “took a nap” as the night was expected to go late.

On Monday morning, POLITICO Playbook released the first excerpt of Grisham’s book, in which Grisham urged Melania Trump to condemn the Jan. 6 Capitol Hill riots as they were starting, but she declined to do so in a single word response: “No.”

In response, Melania Trump’s office issued a statement accusing Grisham of trying “to redeem herself after a poor performance as press secretary, failed personal relationships, and unprofessional behavior in the White House.”

Her mention of “failed personal relationships” struck numerous people in Trump World as offensive, given Grisham’s two divorces and past relationship with former Trump aide Max Miller, now running for Congress. Citing three people familiar with the incident, POLITICO Magazine reported in July that the relationship with Miller “ended when he pushed her against a wall and slapped her in the face in his Washington apartment after she accused him of cheating on her.” Miller denied the allegation.

It is unprecedented for former first ladies to get into public fights with their former top aides who write tell-all books. And it’s made all the more remarkable by how quiet Melania Trump has been outside of the current spat. The former first lady has not appeared in public or used her celebrity to continue to talk about her East Wing causes. One former White House official said that she has been focusing on her son and her family.

Melania Trump’s recalcitrance and retreat to private life stands in contrast to past former first ladies. During her first year after leaving the White House, Michelle Obama criticized the Trump administration for relaxing nutritional standards for school lunches and charged the Trump White House with spreading fear before writing a bestselling memoir. Laura Bush also hit the book circuit after leaving the White House while Hillary Clinton won an election for Senate at the end of her husband’s second term, becoming the first person to be both a senator and first lady for two weeks in early 2001.

The few moments when Melania Trump has spoken out have been restricted largely to social media posting. She went on Instagram and Twitter to mark the Sept. 11 anniversary, saying she was “praying for the families and loved ones of the Marine heroes killed in Kabul and for everyone who is suffering during this difficult time” and to wish Americans happy July Fourth.

And in recent months, she picked a fight with prominent presidential historian Michael Beschloss, saying that he had “proven his ignorance by showing a picture of the Rose Garden in its infancy. … His misleading information is dishonorable & he should never be trusted as a professional historian.” In mid-July, she also tweeted a cautionary warning to people to distrust what they read about her. “How can people believe any of the books discussing Mrs. Trump’s life? Stories about her are idle gossip, many of which are misleading, and only some the truth. Writers have no credibility.”

A former White House official expressed the wish that Melania Trump took on causes like convincing Trump voters to get the coronavirus vaccine instead of getting in fights related to herself.

“It makes me sad that since she still has a platform as a former first lady to do good things,” the former official said, “especially with encouraging people to get vaccinated, instead she has simply complained about what people say about her.”