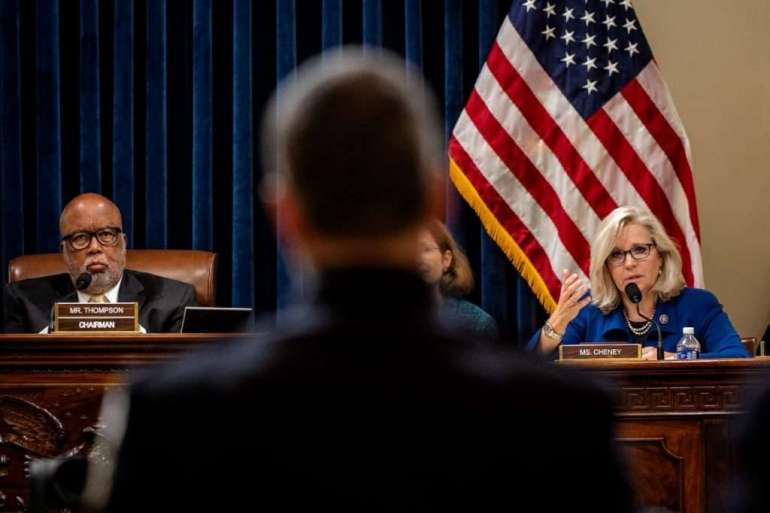 “He has a tremendous amount of admiration and respect for Cheney,” House Majority Whip Jim Clyburn said of Thompson. “If he didn’t have, he never would’ve named her vice chair. Nancy Pelosi didn’t do that.”

Rep. Pete Aguilar (D-Calif.), another Jan. 6 panel member, said Cheney and her fellow anti-Trump committee Republican, Illinois Rep. Adam Kinzinger, raise ideas “that we might not think through completely” without them in the room.

“What’s surprised me a little is, she not only is strong on these issues, she’s passionate, she cares,” Aguilar said of Cheney. “But she also does a lot of the diplomacy that is important if you want to be successful.”

Part of that comes from Cheney’s substantive value to the committee, having held senior executive-branch posts and gotten unique insight into the workings of the West Wing from her father’s role as George W. Bush’s vice president. As House GOP conference chair prior to her ouster, Cheney also acquired valuable knowledge about Trump’s relationship with her colleagues and interactions with members of leadership.

None of it was a given. Some House Democrats privately said they didn’t know what to expect when Pelosi first agreed to put Cheney on the panel after House Minority Leader Kevin McCarthy vowed to boycott the probe following the speaker’s veto of two of his picks. Some lawmakers in both parties still suspect that the good feelings won’t last, particularly when it comes time to craft a final report or draw politically volatile conclusions.

But Thompson, Raskin and others say with each day, as they’ve worked alongside her, their trust in Cheney has deepened.

“Obviously, our politics are diametrically opposed, but I have always considered her a real constitutional patriot,” Raskin said.

And the Thompson-Cheney bond, simultaneously genuine and strategic, is bound to be challenge as the panel digs into the assault on the Capitol and the forces that led up to it, including Trump’s months-long campaign to overturn his election loss. Their inquiry is escalating just as Trump revs up his political machine for a potential 2024 bid and seeks to punish Republicans like Cheney who openly opposed his baseless claims of fraud.

On one front, time will test the duo: Thompson said he hopes the committee can complete its work by “early spring” of next year, but that’s a tall order when juxtaposed with the breadth of the investigation.

Politics also could easily get in the way as Cheney fights for her political life against a Trump-backed challenger. Some former GOP allies rankled by Cheney’s unsparing criticism of Trump now claim privately that she could bail on Democrats if it serves her politically.

“[I] expect her to turn on Democrats when she needs to. I was a close ally of her and she turned,” said one House Republican, speaking candidly on condition of anonymity. “It is just what she does.”

But Cheney’s connection to committee Democrats is strengthened by her willingness to place the blame for the Jan. 6 insurrection on Trump and his allies in Congress who continue to empower him. Her first joint statement with Thompson included a broadside at McCarthy for threatening companies that might cooperate with the committee.

She reiterated in an interview that it was “shameful and despicable” that many of her GOP colleagues had enabled “President Trump’s ongoing use of language that’s meant to incite violence, that incited violence in the past.”