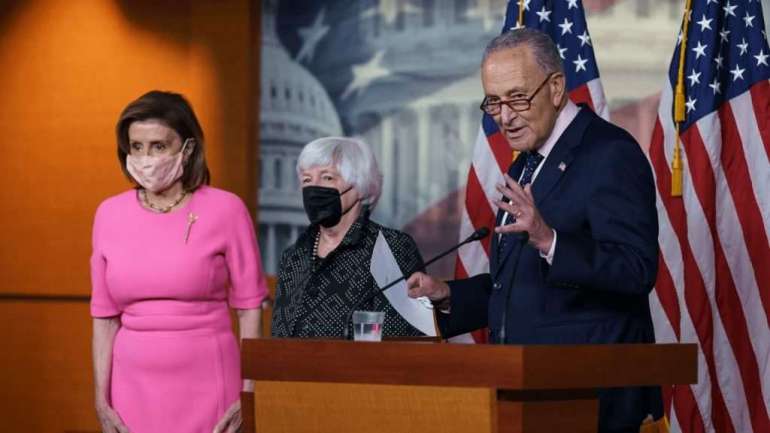 “You’re witnessing democracy in full bloom. Everybody wants to be heard and acknowledged,” said Rep. Lou Correa (D-Calif.), who was optimistic the speaker could pull it off: “Nancy’s a magician.”

Pelosi and her team hope that projecting progress in the talks — both with a “framework” of financing mechanisms announced Thursday and plans for the House Budget Committee to markup the still-unfinished package this weekend — will satisfy progressives enough to back off their threats.

“We take it one day at a time,” Pelosi told reporters Thursday. “I’m confident that we will pass both bills.”

But the leaders’ actions only served to sow more confusion for many lawmakers, raising questions in all corners of the party about precisely who had signed off, on what and for how much.

“We don’t know what they’re talking about,” Sen. Joe Manchin (D-W.Va.) told reporters of the purported framework. “It sounds good if they’re all working toward something to present to us after all the conversations yesterday. I haven’t seen it.”

An aide to Sen. Kyrsten Sinema (D-Ariz.), another key party to any final deal, said of Schumer’s announcement: “Unclear what he is referring to. We have seen nothing and have not signed off on anything.”

Pelosi and Schumer’s actions underscore the sense of urgency among Biden and his Hill allies to show some signs of life in the frenetic scramble to revive his legislative agenda, after little visible progress from the president’s half-day summit with key lawmakers Wednesday. Even with next week’s vote looming, Democrats’ path forward is still murky at best, with moderates and progressives locked in a public standoff over Biden’s two spending priorities.

Earlier in the day Pelosi and Senate Majority Leader Chuck Schumer delivered a cryptic announcement that they, along with the White House, had agreed to “a framework” of options to pay for their social spending ambitions, an effort meant to show forward movement in the stalled negotiations.

“I think having a framework will add more confidence to people as to what we are really planning on doing,” House Majority Leader Steny Hoyer said. “One of the problems now is, people aren’t sure what’s going on.”

House Budget Committee Chair John Yarmuth (D-Ky.) later announced Democrats’ plans to mark up the massive package on Saturday, admitting it would be “more procedural than substantive” given the bill isn’t even finished yet.

One Democrat on the budget panel likened its role to the “stapling committee,” assembling various other committees’ drafts. But the most critical parts of the party-line social spending plan — including any changes to the $3.5 trillion price tag — would need to come through a leadership-written “manager’s amendment.” And that won’t be ready for this weekend, since it’s still missing budget scorecards from the Congressional Budget Office.

Republicans can force symbolic political votes, which would drag the process out for hours. But the budget panel can’t make any binding changes.

The framework announcement came after Pelosi and Schumer emerged from a meeting Thursday morning with Treasury Secretary Janet Yellen, White House adviser Brian Deese and Congress’ top tax writers. Democratic leaders were mum on the details, refusing to say whether that spate of financing ideas will allow them to move forward next week with either their up-to-$3.5 trillion social spending package or the bipartisan infrastructure plan.

“It was a good step of progress,” Schumer said, denying assertions that other senators were caught off guard by the announcement. “This was the first part of the meeting … they’re going to see the [framework] and everyone has a right to say what they’re for and not for.”

While Pelosi and Schumer cheered what they saw as movement, other Democrats privately panned the announcement, saying it was little more than an effort by leadership to demonstrate momentum without real substance behind it, particularly without the buy-in from key centrists.

But a Democratic aide characterized the agreement as a menu of financing options the White House can present to moderates as a way to pay for the majority party’s planned multitrillion-dollar bid to expand social programs like Medicare, child care subsidies and education assistance.

Democratic leaders are hoping the narrower list, culled from a broader selection of potential funding sources floated by Senate Finance Chair Ron Wyden (D-Ore.) and House Ways and Means Chair Richard Neal (D-Mass.), can be used to squeeze some specifics out of centrists.

So far, powerful moderates including Sinema and Manchin have complained about the overall price tag of the social spending plan but have refused to publicly say what topline they would support.

Even though Democrats are planning to pass their spending bill under special rules that allow them to sidestep the filibuster, they still need all 50 Democrats to sign off, meaning Manchin and Sinema are the ultimate arbiters of whatever framework top Democrats are touting as progress.

The White House was in touch with a group of moderate Democrats throughout the day Thursday to further discuss the funding framework, according to multiple Hill sources.

But Manchin signaled late Thursday that he had yet to agree to a topline spending target for the bill, despite being asked by Biden to do so during their White House meeting this week.

“We’re just talking on what the need is,” Manchin told reporters.

Still, progressives cheered the yet-to-be-revealed framework. Senate Budget Chair Bernie Sanders (I-Vt.) said Democrats could “pay for this whole thing and absolutely make sure” they follow through on Biden’s promise to not increase taxes on families making under $400,000 a year.

“The truth is, it is not hard to come up with approaches to do away with the tax cap and to demand that the wealthy and large corporations pay their fair share of taxes,” Sanders said Thursday. “You could do a lot more than $3.5 trillion.”

But without more public guarantees from Manchin ahead of the House infrastructure vote Monday, it’s unclear if progressives will be willing to relent on their threats to vote against the bill.

“I would prefer that we get more certainty on the reconciliation bill before we move forward,” House Rules Committee Chair Jim McGovern (D-Mass.) said Thursday.

Late last month, the House voted to slate the Sept. 27 deadline for bringing the bipartisan infrastructure plan to the floor. Majority party leaders accepted the pressure point as a concession to moderate Democrats, who were threatening to block the chamber from moving forward with the separate party-line spending plan.

Now approaching that trigger point on Monday, the party is still grasping for consensus on the $3.5 trillion bill — a misalignment that could foil Biden’s “two-track” scheme for advancing the larger spending package alongside the bipartisan infrastructure deal.

“I think the most important goal is 218 and making sure it passes,” New Democrat Coalition Chair Rep. Suzan DelBene (D-Wash.) said of the infrastructure bill. “We all sink or swim together.”