That’s a bit of what it feels like, running for president. And it should worry us that all of our leaders are subject to it.

In early 2019, still in the thick of the presidential campaign, Zach Graumann, my campaign manager, said to me, “We need to give you a different haircut. And update your wardrobe.”

I said, “No one cares what I look like. Bernie looks like the scientist from ‘Back to the Future.’ The point is just to stand for something. People know what I stand for and don’t care about my hair.”

Zach shook his head and said, “That’s not true. Bernie’s old. You’re young. People care that you’re wearing a weird button or a suit that doesn’t look quite right. I’m going to set you up with a hairdresser and tailor.”

I went along with it. I already had to get used to wearing makeup for television appearances that I often kept on for the rest of the day. The most irritating thing was using hair product again after taking a 20-year break from it. Apparently, “hair gel” was upgraded to “hair wax” at some point, which seemed like an improvement from my old Studio Line gel from L’Oreal.

When I was the CEO of Manhattan Prep, a test prep company, I would often teach classes or conduct events without identifying myself as the CEO. In that case, it was better for the company if people didn’t think of me as anything other than a random instructor. The more it was about me, the less it was about the company.

In my experience, if you see a CEO chasing press, that person’s company is probably headed for trouble. The energy spent burnish­ing your image could almost always be better spent managing your people, ferreting out problems, clearing obstacles, honing processes, talking to customers, selecting vendors, recruiting team members and working on new initiatives. With Manhattan Prep, the most important thing was to do a good job for each student. The most powerful growth driver would be a satisfied student telling his or her friend, “Hey, this company did a great job, you should give them a try.” That is the way most businesses operate: If you do a good job and make people happy, then the business grows.

In the context of presidential politics it was the opposite. The job was simply the seeking of attention. You would seek press vir­tually all of the time. Interviews and press — or an in-person event that hopefully would attract press — were the job. When I wasn’t on the road, I would wake up on a typical day and head to a television studio first thing in the morning, go to the office to film some digital ads, do several interviews and then head to a grassroots fundraising event that night.

On a presidential campaign you make the big initial hires. But then as the campaign grows, it adds people quickly, often people who played a similar role for another campaign. It was jarring for me to show up to the office in New York or an event in New Hampshire and meet someone, only to be told, “This person is now working for you as a field organizer/digital outreach special­ist/advance team/new role.” I would thank the person and be gen­uinely grateful, but it felt strangely impersonal. When I ran my own company, I made sure to interview anyone we hired at any level, because hiring seemed like one of the most important aspects of leadership.

In national politics, it turns out, you’re not as much the CEO as you are yourself the product.

The first time I was noticed in public I was taken aback. I was in a convenience store with one of my sons in March 2019. A hipster-looking guy in his twenties said to me, “Hey, are you Andrew Yang?”

This was particularly surprising to me because I was wearing jeans and a hoodie. The fact that people recognized me out of my campaign uniform of a blazer and dress shirt was shocking to me. My favorite was when a young woman came up to me and said, “Are you Andrew Yang? No, no, you’re not,” and then walked away.

Our media exposure had grown in tandem with our fundraising. We had graduated from podcasts to television. At first it was political comedy shows like “The Daily Show” or “Patriot Act with Hasan Minhaj” or “Real Time with Bill Maher.” Then it was “The Late Show with Stephen Colbert,” “The View” and “Late Night with Seth Meyers.” Then eventually it was Ellen DeGeneres and Jimmy Kimmel. Jimmy and I compared notes on playing Ted Cruz in basketball, because Ted had recently accepted a challenge from me before thinking better of it, and Kimmel had scrimmaged with him, too. Stephen Colbert joked that I went from “regular guy Andrew Yang” to “famous guy Andrew Yang.” In many cases I went on a show more than once—like “The View”—and the first time I was on, the interviewers were a bit dubious. There was an undercurrent of “Who the heck are you?” But the second time around there was much more openness and even warmth.

We started spending money to increase my support in Iowa and New Hampshire, bombarding the airwaves in both states for weeks. We spent $6.6 million on television ads in Iowa and $3.9 million in New Hampshire alone. The TV ads were something else. The first ad had a lot of imagery of planet Earth. I joked with my wife Evelyn that the voice-over for the ad should go something like this: “He arrived on this planet from a land far, far away. Andrew Yang—EARTH PRESIDENT 2040.”

Recording political ads required hours. There’s a lot of line reading and looking at a camera. The words have to be precisely measured to be exactly thirty seconds or sixty seconds. After you’re done with a take, a producer will say something like “Hey, that was 28 seconds; can you drag it out a little further?” or “Great, give it a more somber downbeat take.” Recording those ads would typically take half a day because they would record multiple ads at a time with a full film crew. And it meant more time in makeup.

The fact that there were hundreds of campaign workers spending millions of dollars all in an effort to make you look good is a positively bizarre feeling. I joked with the digital team that they must have pictures of me emblazoned in their brain when they go to sleep at night.

It was enough to go to one’s head. I’d been a CEO and founder of a company, but running for office was a different animal. The people around me treated me as either a celebrity or a product that hundreds of staffers were focused on selling, and everyone in my orbit started treating me like I might be a presidential contender. I was getting a crash course in how we treat the very powerful — and it was weird.

But it was more than just a head rush. There are psychological consequences to being treated this way for months on end.

The historian Henry Adams described power as “a sort of tumor that ends by killing the victim’s sympathies.” This may sound like hyperbole, but it has been borne out by years of lab and field experiments. Dacher Keltner, a psychology professor at UC Berkeley, has been studying the influence of power on individuals. He puts people in positions of power relative to each other in different settings. He has consistently found that power, over time, makes one more impulsive, more reckless and less able to see things from others’ points of view. It also leads one to be rude, more likely to cheat on one’s spouse, less attentive to other people, and less interested in the experiences of others.

Does that sound familiar? It turns out that power actually gives you brain damage.

This even shows up in brain scans. Sukhvinder Obhi, a neuroscientist at McMaster University in Ontario, recently examined the brain patterns of the powerful and the not so powerful in a transcranial-magnetic-stimulation machine. He found that those with power are impaired in a specific neural process — mirroring — that leads to empathy.

I’m a parent, and one thing you find very consistently with kids is that they reciprocate what you do. You smile, they smile. You laugh, they laugh. Among the powerful in various settings, their impulse to reflect what they are being shown emotionally has been numbed. They similarly lose the ability to put themselves in another person’s shoes.

Lord David Owen and Jonathan Davidson called it the “hubris syndrome” — a disorder of the possession of power held over years and with minimal constraint on the leader. Its clinical features include contempt for others, loss of reality, recklessness and displays of incompetence. Lack of empathy is part of the package.

Perhaps most distressing is that in lab settings the powerful can’t address this shortcoming even if told to try. Subjects in one study were told that their mirroring impulse was the issue and to make a conscious effort to relate to the experiences of others. They still couldn’t do it. Effort and awareness made no difference in their abilities.

Susan Fiske, a Princeton psychology professor, has argued that this change in attitude is adaptive and meant to aid efficiency. If you become powerful, you have less need to read other people because you have command of resources. The need to demonstrate empathy is behind you.

One behavior that did help some people relate to others was to recall a time when they felt powerless. Perhaps this is why so many of our leaders seem to recount their humble beginnings, because we sense that if those experiences are deeply ingrained enough, they can counteract their becoming progressively out of touch. It also may be why leaders — for example, women — who were perpetually marginalized in some way may be perceived to be more sensitive even after rising to positions of power.

On the campaign trail, I could clearly see how politicians become susceptible to growing so out of touch. You spend time with dozens of people whose schedules and actions revolve around you. Everyone asks you what you think. You function on appearance; appearance becomes your role. Empathy becomes optional or even unhelpful. Leadership becomes the appearance of leadership.

The process through which we choose leaders neutralizes and reduces the capacities we want most in them. It’s cumulative as well; the longer you are in it, the more extreme the effects are likely to be over time. 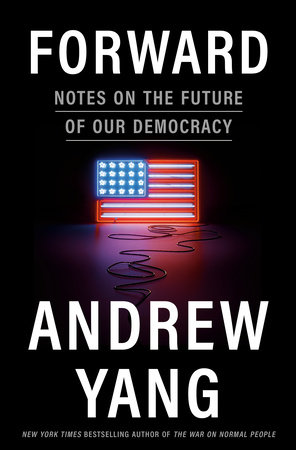 FORWARD, by Andrew Yang, will be published by Penguin Random House on Tuesday, October 5.