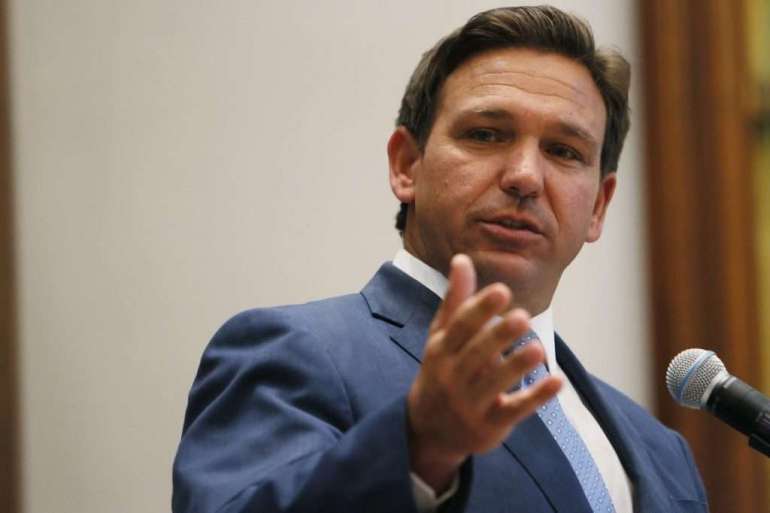 Ladapo also co-authored an analysis published last year in September that determined hydroxychloroquine was effective in treating Covid-19, and reports of heart problems related to the drug were rare. Less than three months before Ladapo’s analysis was published, the U.S. Food and Drug Administration determined hydroxychloroquine wasn’t safe because it led people to have heart problems. Also, an FDA study determined the medicine wasn’t effective against the virus.

Despite the rejection from the FDA, Ladapo joined a news conference with an ultra-right wing group called America’s Frontline Doctors on the steps of the U.S. Supreme Court to promote hydroxychloroquine. The group also raised several key points that Ladapo consistently brought up in his Wall Street Journal columns, including how the negative aspects of lockdowns outweighed the impact of the virus itself.

“Anytime someone, at this stature, disagrees with Dr. Fauci, of course, they say that now he’s not qualified,” Simpson said. “He seems to be very highly qualified, and certainly has got the credentials to make a great surgeon general.”

Simpson said Ladapo’s confirmation will be up to each senator. State Sen. Aaron Bean (R-Fernandina Beach), chair of the Senate Appropriations Subcommittee on Health and Human Services, said most senators would agree with Ladapo’s approach toward allowing people to make their own health decisions without government influence.

“We have to go to other countries where they don’t make decisions for themselves, and here, we make our own decisions and we want to keep it that way,” Bean said. “I think the majority of people in the Senate particularly would say the same thing.”

Democrat lawmakers believe Ladapo’s hiring was purely political. He is one of roughly 44,000 medical professionals who signed a statement known as the Great Barrington Declaration, which called for the pandemic to be addressed with “Focused Protection,” which directs government to focus only on the protection of the elderly and medically vulnerable. The approach is similar to the course taken by DeSantis.

The declaration, which is backed by a libertarian think tank in Great Barrington, Mass., also points to herd immunity as the silver bullet to slay the pandemic once and for all.

State Sen. Janet Cruz (D-Tampa) said Ladapo’s Ivy league credentials may deceive residents into trusting the politically-charged pandemic strategy waged by DeSantis. She said her husband, who is a kidney doctor at Tampa General Hospital, was shocked by Ladapo’s agnostic take on using the Covid-19 vaccine and wearing face masks to control spread.

“He’s astounded and really quite disappointed that someone with such a pedigree from a medical perspective is buying into these ridiculous conspiracy theories,” Cruz said. “It’s really disappointing.”

Still, Cruz expected Ladapo to have no trouble earning the Senate confirmation.

U.S. Rep. Al Lawson (D-Fla.), whose 5th congressional district encompasses mainly majority Black areas between Jacksonville and Tallahassee, said he was deeply concerned with what Ladapo’s confirmation would mean for boosting vaccination rates among hesitant communities. Ladapo, who is Black, told reporters the Covid-19 vaccine wasn’t nearly as effective as everyone had hoped. This undermined several months of work by Lawson and a consortium of black church pastors who sought to close a racial disparity gap among vaccinated Floridians.

“I was really surprised, because it didn’t seem to be science-based,” Lawson said of Ladapo’s comments. “When you have some African Americans who still talk about the Tuskegee experiment, it really doesn’t help that much for something like that to come out.”

As of about mid-September, 32 percent of Blacks in Florida were fully vaccinated, which is less than the 49 percent of vaccinated whites, according to a weekly report by the Florida Department of Health.

“We’re trying to save lives in this state, now all over the country,” Lawson said. “And it’s in the hands of a new surgeon general who comes out and says they don’t need masks, they don’t need this or that or whatever.”