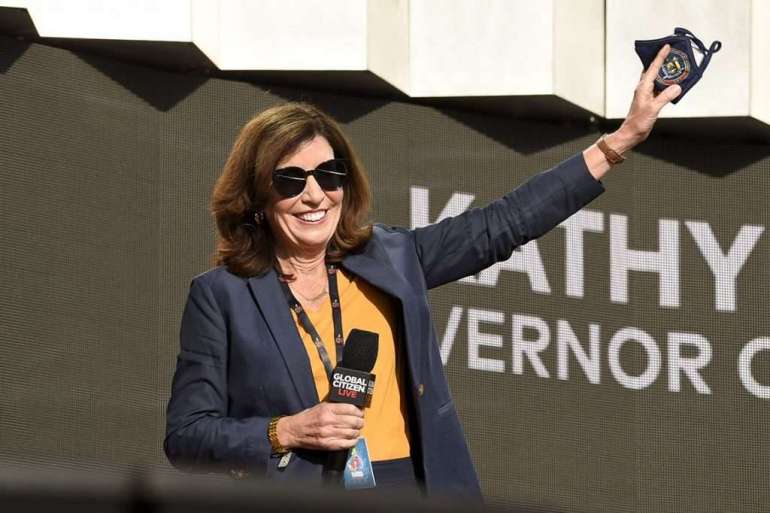 “I was thinking, ‘oh, they’re trying to f— us and they’ll come back and change the timing tomorrow,'” he said, “And then I realized, they legitimately wanted our advice.”

The encounter is indicative of life after Andrew Cuomo, who resigned in August. Following more than a decade of rule by threat and fiat, the former governor has left behind a replacement who wants to “change the culture of Albany.” Hochul, who ran for lieutenant governor on a ticket with Cuomo in 2014 and 2018, has promised to build an administration that runs on collaboration and respect. She already has purged many of her former running mate’s top advisers, from the Cabinet level on down.

But the Democrat, a former lawmaker, is hardly the first leader in New York to make such a pledge. And whether any one person, even a governor, can invent a new way to grind the sausage in a capital seemingly impervious to change is an open question.

Few doubt Hochul’s intentions, at least not yet. But many wonder if muscle memories developed during the Cuomo years — and earlier — can be retrained any time soon. If a new way is indeed possible, it would require nearly everyone in the state’s political sphere to collectively give it a try.

“I think this is the big stress test of this wider ecosystem of New York and beyond,” said Democratic strategist Jon Reinish, a managing director at Mercury Public Affairs. “It‘s a conscious decision: Are we going to play by the rules that we’ve all kind of played around or are we going to make new rules?”

The new governor, for all the house cleaning she’s done, was quickly criticized after naming a former Cuomo appointee to the Joint Commission on Public Ethics, a panel charged with rooting out wrongdoing at the top levels of state government. A day later, Hochul said the choice was a necessary short-term fix and vowed to “turn upside down” the entire structure of government.

That’s something that should be done in tandem with lawmakers, said state Sen. Alessandra Biaggi (D-Westchester), the chamber’s ethics chair. She had immediately called out Hochul’s appointment as “concerning“ once it was announced.

“One person alone won’t be able to effectively change the culture of Albany, but it does begin at the top,” Biaggi said in an email the following week. “We can’t shift culture without legislation that actually addresses the structural impediments to a functioning ethics system. I am glad the governor is dedicated to addressing these issues — we need a real partnership between the Executive and the Legislature in order to get this done.”

It’s not just Hochul’s direct actions that matter. The previous administration had cultivated a habitat of harassment, bullying and micromanagement detailed in several news reports and finally an investigation from Attorney General Tish James in August. That report led to Cuomo’s resignation.

So far, Hochul’s Albany is focused on rectifying some of the flaws associated with her predecessor. She said transparency would be a “hallmark” of her administration and that she’d seek out ways to fulfill public records requests — which were often held captive for months and years under Cuomo — as quickly as possible. Her counsel and top aide this month sent a letter to all agency heads requiring them to review and revise the ways in which they are meeting the state’s transparency laws.

And she has vowed to make the Capitol’s second floor, where her office is located, a safe workplace.

“No one will ever describe my administration as a toxic work environment,” Hochul told reporters shortly after learning of her promotion. “No one who was named doing anything unethical in the [attorney general’s] report will remain.”

Some of the people most associated with Cuomo’s brand of aggressive politics have already resigned. Aides Rich Azzopardi and Melissa DeRosa are gone. So are top officials and longtime Cuomo allies like Department of Financial Services head Linda Lacewell and state Inspector General Letizia Tagliafierro. Health commissioner Howard Zucker, who was associated with Cuomo’s now-contentious Covid-19 policies, announced his resignation last week, and the following day several other agency heads and Cuomo appointees were reportedly asked to resign.

A personnel purge makes a point, but insiders say they realize the new governor would be making a mistake if she simply got rid of all top-level people who worked for her predecessor, many of whom have the experience she needs to keep New York running. Even new hires are more likely than not to have some ties to Cuomo, who had been in Democratic politics for the better part of four decades.

Hochul set up a 45-day period on her first day in office to evaluate the roles of top Cuomo administration personnel she inherited. Many Executive Chamber staff, especially those in not especially prominent positions, were likely to stay on in some capacity, Hochul’s Chief of Staff Jeff Lewis said in an August memo.

All of this creates anxiety for those doing work in the Capital who are left to wonder where old and new loyalties will ultimately lie, especially as the contentious state budget season approaches early next year.

Some familiar faces who advanced Cuomo’s cause and showed up at the table as trusted advisers during his popular pandemic briefings in 2020 — such as Budget Director Robert Mujica and State University of New York Chancellor Jim Malatras — still hold vital governmental roles but have not been specifically named as complicit in any unethical behavior.

Mujica, a former staffer for Senate Republicans who has steered Cuomo’s powerful budget process since 2015, was in attendance for the three-way legislative leaders meeting Hochul held with Senate Majority Leader Andrea Stewart-Cousins and Assembly Speaker Carl Heastie after her swearing in on Aug. 24, two individuals in attendance said.

Last Friday, Hochul hinted that the budget czar was unlikely to be axed in the near future.

“He has been working with our administration,” Hochul said following an unrelated event in Lake Placid on Sept. 24. “To date I am still evaluating positions, but he is working very hard with us to chart the future going forward, so I believe he’ll be with us for some time.”

Privately, lobbyists in Albany don’t know what to make of all the changes — or how to operate now, said one Democratic strategist, speaking on condition of anonymity because they are unconvinced that Hochul’s staff is any less retaliatory than Cuomo’s. With so many of the same people in place, the strategist said, it still feels like the same town, still accustomed to running “on fear.”

“But I don’t think that’s what she wants,“ the strategist said of Hochul. “And if you fire everyone, we have no government.”

Further holding some back from fully converting to a new culture is that Cuomo hasn’t gone entirely silent. Azzopardi has remained in the former governor’s employ as spokesperson, repeatedly bashing James’s investigation and reportedly working to undermine Hochul’s new administration. Last week, Cuomo’s campaign account blasted subscribers with a Newsday op-ed from a lawyer who worked for the administration of former Gov. Mario Cuomo, Andrew Cuomo‘s late father, in which the attorney compared the younger Cuomo’s resignation to a “coup.”

It’s not lost on political veterans that a vow to upend the state Capitol is hardly a new one.

Cuomo himself promised to “restore honor and integrity to government, with tough new ethics standards” in the first page of a 2010 campaign document called “Clean Up Albany: Make it Work.”