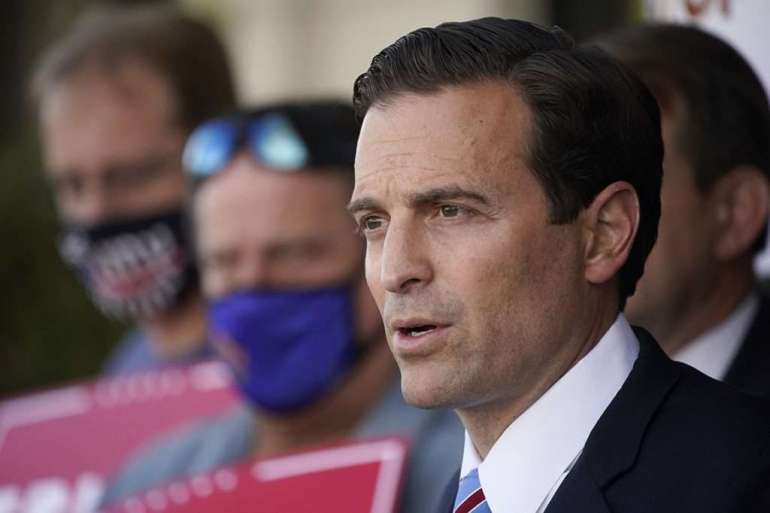 Under questioning by a prosecutor, Laxalt described how he was introduced to Parnas, saying he first met Parnas at the Trump International Hotel in Washington in 2018 over cigars and drinks in the company of one of then-President Donald Trump’s lawyers, former New York City mayor Rudy Giuliani.

Laxalt said Parnas eventually pledged $10,000 and said he’d raise hundreds of thousands of dollars for the campaign, but the money was slow to arrive, so Laxalt called again and again.

“I’m basically repeatedly reaching out to everyone who pledged to donate,” Laxalt said, adding that he was “really bombarding” Parnas.

Parnas eventually arranged two $5,000 donations through a colleague who earlier pleaded guilty in the case, Igor Fruman. Laxalt’s campaign later became suspicious of the donation and gave up the money.

“We sought the advice of counsel and we returned the check for the $10,000 to the United States Treasury,” Laxalt told jurors.

While Laxalt’s testimony supported the basic allegations against Parnas, Laxalt helped prosecutors paint a picture of the chummy relationships between candidates and high-dollar donors or bundlers and the intense pursuit of last-minute cash on the eve of major elections.

But Parnas’ attorney Joseph Bondy also said that those being targeted for funds are sometimes disparaged by the very politicians reaching out to them for cash.

Bondy said Laxalt had referred to Parnas as a “clownish” figure from Brooklyn who wore a “gold chain,” even as he continued to press him for money. And he pressed Laxalt on whether he sought donations from other people he considered “clownish.”

”I started to doubt whether he was legitimately going to help the campaign,” said Laxalt. “Politics is filled with a lot of characters…There are some people who just want to be in photos. They say they want to help a lot, but don’t necessarily help.”

While Laxalt told a prosecutor that Giuliani introduced him to Parnas, Bondy said records indicate the Senate hopeful told the FBI at one point that Florida Gov. Ron DeSantis actually connected the men.

“I don’t recall if that’s what I told the FBI,” Laxalt said. “As we’re closing the campaign, I believe we spoke and compared notes about whether he, in fact, was helping him, but that’s my only recollection about speaking about Mr. Parnas with Mr. DeSantis.”

Bondy also pressed Laxalt on his honesty, questioning whether he’d failed to tell bar authorities about a criminal conviction he incurred as a teenager.

“Did you fill out those applications completely and accurately?” the defense attorney asked.

“To the best of my knowledge, yes,” Laxalt replied.

“Did you get convicted of an assault when you were younger?” Bondy asked.

“I’ve been very open about my teenage drinking and problems and eventually getting my sobriety, which I still have for over 20 years,” said Laxalt. “If I forgot anything, it was certainly an accident.”

Laxalt said the alleged teenage assault was raised in the final days of his 2018 governor race. “It’s an issue that came up in the closing weeks of my campaign, with tons of other attacks and things that were flying down the pike from the media,” he said.

Laxalt is one of Republicans’ top recruits as they seek to retake the Senate in the 2022 midterm elections.