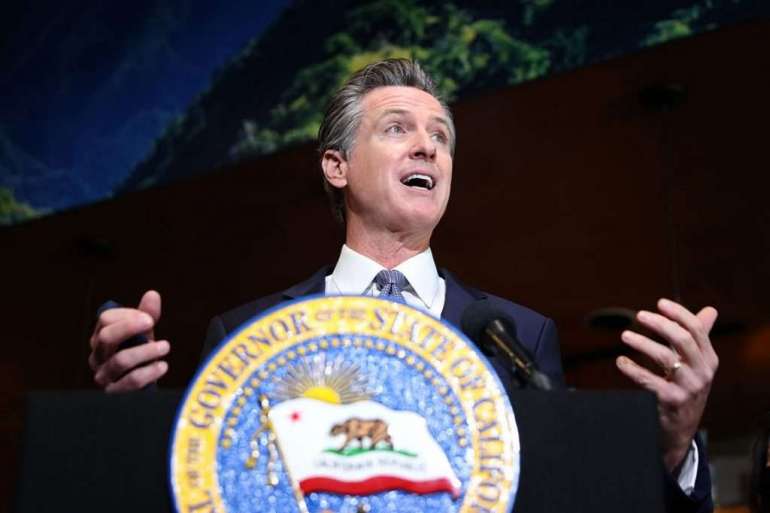 The media-savvy politician who just survived a recall election has embraced cultural flashpoints for nearly two decades, often setting markers that take time to realize. He landed on the national stage as San Francisco mayor when he illegally issued marriage licenses to same-sex couples in 2004, and it took a U.S. Supreme Court battle and years of Democratic infighting to legalize gay marriage.

Newsom seems to revel in setting markers that shift the conversation before the nuances are worked out. He told CalMatters in 2018 that “I’d rather be accused of [having] those audacious stretch goals than be accused of timidity.”

Here are some of his most recent examples.

SCHOOL MANDATES: Newsom leaned in on Covid mandates, touting first-in-the-nation requirements for school vaccines and masking policies and juxtaposing himself against Republican governors running in the opposite direction. But there were important caveats.

Newsom held a news conference this month announcing that the state’s K-12 students will be required to receive vaccines in order to enter classrooms, lauding California as the “first in the nation to announce Covid-19 vaccine requirements for schools.” But when that will actually happen got less fanfare. The mandate starts in the term that follows full FDA approval for an age range, and Newsom estimates the requirement for grades 7-12 won’t apply until July 2022.

Newsom’s rule also allows students to seek personal belief exemptions, leaving it to the state Legislature to change that through a stricter requirement — a fight that has proven to be highly contentious in the past.

A related July announcement, that everyone in schools must mask up, was criticized for being ambiguous and confusing. The Newsom administration had to tweak the public health guidance in response to pushback, clarifying that schools would decide how to enforce the statewide policy.

Some appreciate Newsom’s slow takeoff strategy and reliance on on-the-ground enforcement, though.

“This is the best kind of mandate the school community could have hoped for,” education lobbyist Kevin Gordon said of the student vaccine rule. “It’s not a mad dash and scramble to try to implement. It provides some leadership, but it doesn’t have the effect of making everybody chase their tails like a hard and fast mandate.”

The governor focuses “on the things Californians care about the most,” Newsom’s office said in a statement Tuesday. “California has always been on the forefront of progress and Governor Newsom continues to hold that torch.”

GAS-POWERED CARS: Newsom made headlines around the world by signing an executive order last fall calling for an end to the sale of new internal-combustion cars by 2035. The move rode atop a wave of pledges by automakers to invest in electric vehicles, and ushered in similar bans in the European Union and New York.

The state’s air and climate agency was already heading in that direction under its existing authority, including a 2030 economy-wide emissions target and an executive order by former Gov. Jerry Brown to achieve carbon neutrality by 2045. California air regulators are mapping a trajectory for sales of zero-emission vehicles.

They’re also planning to include a loophole: The proposed rules would still allow plug-in hybrid sales after 2035, contradicting the explicit ban on internal-combustion engines.

Still, environmentalists say Newsom’s order gives the agency more political backing to pursue tough targets as it faces lobbying from oil companies that argue the rules are too aggressive and should make space for other types of fuels besides electricity and hydrogen.

“He has with his executive order essentially said what CARB was already on the path to do,” said Kathryn Phillips, former director of Sierra Club California. “And it’s fine that he did that because until then, people who were involved in this issue did not have a clear signal from him about whether or not he would be supportive.”

OIL PHASEOUT: Newsom in April announced a policy that environmentalists had sought for years: The state would ban fracking by 2024. He also directed regulators to analyze how to phase out all oil and gas extraction by 2045.

But environmentalists worry that tackling fracking — which accounts for less than one-fifth of the state’s fossil fuel production — will sap Newsom’s momentum to go further.

“He’s three years into his administration, and he still has just got things on the table that are incredibly important public health and climate issues,” Phillips said.

Speaking at the site of the massive oil spill off Orange County this month, Newsom touted his internal-combustion car ban and excoriated the “damn platforms” for contributing to climate change and putting wildlife at risk, but he didn’t propose immediately reining in production. The public health rules and reductions in new permits “are on the table,” he said, “and very much part of the conversation we’re having with renewed sense of urgency because of this latest spill.”

PARENTAL LEAVE: Some of Newsom’s most ambitious plans haven’t panned out. The father of four entered office proposing to expand partially paid parental leave from six weeks to six months, a goal that landed him writeups in the New York Times, People and HuffPost.

One nuance of his plan quickly surfaced and dampened the enthusiasm: He was proposing a total of six months per child, which would amount to three months each if split between two parents.

Newsom created a task force to study how to fund the larger expansion, as promised, and has since signed laws stretching the paid leave program to eight weeks and giving unpaid leave protections to more workers. But this fall he balked at another step his own task force recommended: increasing the proportion of wages replaced through the program to 90 percent, so that lower-paid workers can more easily afford to go on leave.

The governor vetoed a bill last month that would have done just that, saying the change would “result in higher disability contributions paid by employees.”

Raising worker contributions, however, is how the state would likely fund at least some of his proposal to expand parental leave.

A longtime advocate said she would keep pushing. “I think it’ll be a multi-year effort,” said Jenya Cassidy, director of the nonprofit California Work & Family Coalition. “I’m not sure that’s popular, because people need it yesterday.”

SINGLE PAYER: Newsom campaigned hard on his support for a Medicare-for-all-style health care system when President Donald Trump was in office. He doubled down on his very first day as governor, saying he was “committed” to bringing single-payer to the state. His stance won him the support of the powerful California Nurses Association and the progressive left.

The governor has expanded subsidized health care coverage to more residents, regardless of their immigration status. But his efforts on single-payer have been largely limited to creating a commission to study the issue and asking President Joe Biden to help states get the waivers necessary to establish such a system. A bill that would have advanced the cause in California failed this year, and some proponents blame Newsom for not expending political capital on it.

Biden isn’t a fan of single-payer, but health care experts expect his administration will be more open to state experimentation.

“Trump was a very good excuse for not moving ahead, but that excuse wears a little thinner under the Biden administration,” said Larry Levitt, an executive vice president with the Kaiser Family Foundation.

Creating a whole new health care system, which no other state has managed to do, is clearly a monumental task. Newsom may hope to appease the nurses’ union and single-payer advocates with more incremental accomplishments.

One thing’s for sure: they won’t be satisfied with a commission. Stephanie Roberson, government relations director for the nurses’ union, likened it to “an unsatisfying appetizer.”

“There’s a big difference between putting yourself out there, being visible, showing you’re a leader, showing you care about your constituents — and flitting from one thing to another and not following through,” Sragow said. “That ultimately is deadly to a political leader. It takes time to see what any given politician is doing.”