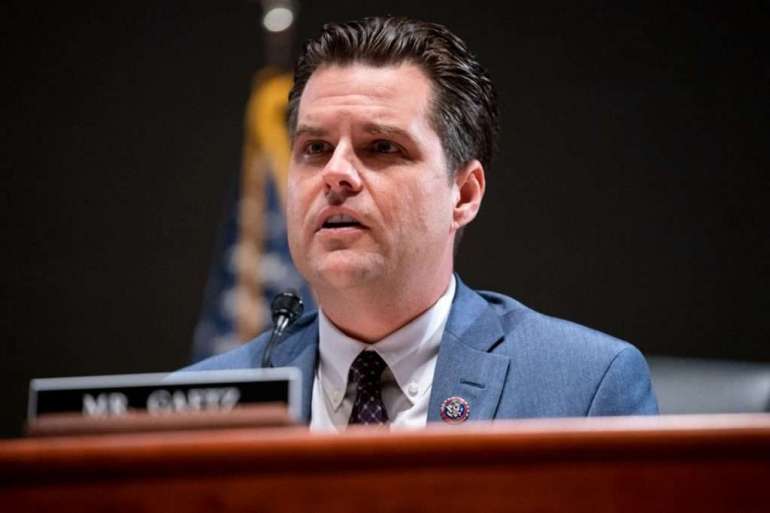 Gaetz confirmed to POLITICO on Tuesday that he was the target of the alleged threats. The message arrived as he played a prominent role advancing former President Donald Trump’s false claims of widespread fraud in last year’s presidential race.

The arrest came within a day or two of the Republican congressman taking to the House floor last week to complain that the Justice Department wasn’t being aggressive enough in dealing with threats against him.

“I think someone may be trying to kill me and if they are successful I would like my constituents and my family to know who stopped their arrest,” Gaetz said last Wednesday. The congressman went on to say that someone who threatened him on Twitter traveled to Washington D.C. in recent days and that the Justice Department declined to arrest the suspect despite the Capitol Police recommending such an arrest.

Gaetz told POLITICO Tuesday that he believes his comments prompted the arrest, but that the case he described on the floor and the earlier episode mentioned in the indictment are not related.

“An indictment was issued in May, and has now been unsealed the week after my criticism,” the GOP lawmaker said. “If they took our security seriously, they would arrest all of the people who violate federal law and the threats to kill us, not just some of them… I think that the Department of Justice is biased against Republicans.”

At a press conference on an unrelated topic Tuesday, Deputy Attorney General Lisa Monaco said that federal prosecutors are determined to pursue threat cases. She also seemed to go out of her way to note that the department is committed to addressing threats against federal lawmakers.

At a court hearing in Los Angeles Friday, Huelsman was released by a federal magistrate judge on a $20,000 bond, a spokesperson for the U.S. Attorney’s Office there said.

A representative of the U.S. Attorney’s Office for the Northern District of Florida confirmed the indictment and arrest. Huelsman is scheduled to appear before a magistrate judge in Pensacola on Friday, according to court records.

According to online databases, a Eugene Huelsman based in Thousand Oaks has worked for decades as a camera operator on film and television productions, garnering five Emmy nominations for his work on NBC’s “Late Night with Conan O’Brien.”

Gaetz has been the focus of intense Justice Department activity in recent months.

For about a year, federal prosecutors in Orlando have been investigating whether Gaetz had sex with underage girls or paid women to cross state or federal lines to engage in prostitution. Gaetz has not been charged in the case, but the probe grew more serious for the congressman in May, when a longtime friend — former Seminole County tax collector Joel Greenberg — pleaded guilty to a sex trafficking of a minor charge and agreed to cooperate with prosecutors.

Gaetz has denied engaging in sex with anyone under 18. He’s also denied hiring prostitutes, although he says he sometimes paid travel expenses of women he dated.

Meanwhile, in August, Florida developer Stephen Alford was indicted on charges that he tried to extort $25 million from Gaetz’s father as part of a bizarre scheme to get Gaetz a pardon and simultaneously win the release of a former FBI agent who disappeared in Iran in 2007, Robert Levinson. Alford has pleaded not guilty in the case.