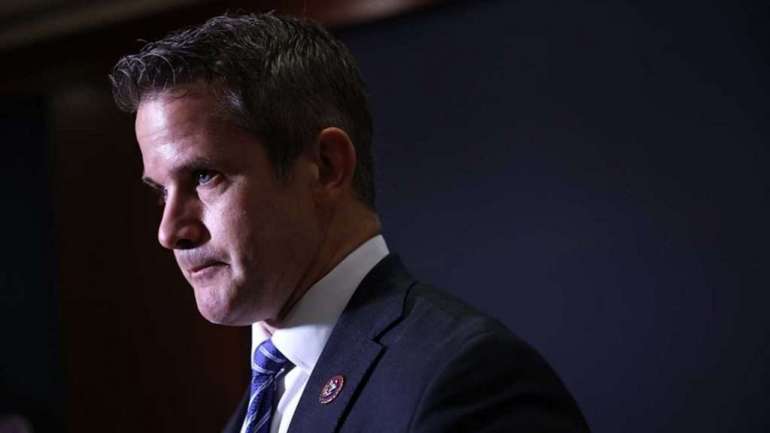 “There’s little to no desire to bridge our differences, and unity is no longer a word we use,” Kinzinger said. “It has also become increasingly obvious that in order to break the narrative, I cannot focus on both a reelection to Congress and a broader fight nationwide.”

Kinzinger, who is friendly with LaHood, faced uphill odds for returning to Congress after he spent much of his last few years criticizing the president, who still holds an iron grip on the GOP electorate.

And even before Democrats landed on a new congressional map, it was clear that they planned to dismantle as many of the state’s red districts as they could, shoving incumbents together or carving their homes out of the new districts that most closely resembled their old seats. GOP Reps. Mike Bost and Mary Miller are also looped together in a southern district.

Some of Kinzinger’s colleagues quickly noted that his decision doesn’t surprise them at all.

“I liked Adam as he served our country well, however his vocal views and votes did not fit with conservatives objectives or directives, especially with the radical socialist agenda that we are battling with today,” said Rep. Ralph Norman (R-S.C.), a member of the House Freedom Caucus.

And Trump was quick to celebrate the news in a statement emailed to reporters: “2 down, 8 to go!” he wrote.

Questions about Kinzinger’s fate in Congress have been swirling for months as he leaned fiercely into his criticisms of Trump as well as some of his own GOP colleagues. His decision to join the Jan. 6 select committee, at the appointment of House Speaker Nancy Pelosi, further complicated his relationships in Congress.

Far-right conservatives — with whom Kinzinger was once aligned — hailed his decision.

Members of the House Freedom Caucus have held press conferences calling for GOP leader Kevin McCarthy to approve a conference resolution that would’ve effectively removed Kinzinger and Rep. Liz Cheney (R-Wyo.), another prominent Trump critic, from their committee assignments for taking their seats on the panel examining the Capitol insurrection.

“Sadly since coming to Congress in January, I’ve seen firsthand that Reps. Kinzinger and Cheney have done more to hurt the Republican conference than help them while working for Adam Schiff and Nancy Pelosi,” freshman Rep. Lauren Boebert (R-Colo.) said in late July during the push to have Kinzinger removed. “These members should not be allowed in our closed door private meetings…why is he able to be part of those conversations while he goes back and confers with the opposition?”

And freshman Rep. Marjorie Taylor Greene (R-Ga.) in a statement called Kinzinger a “traitor to the Republican party” over his opposition to Trump.

Kinzinger, too, has fought back against some of his fiercest critics, launching his Country First PAC, designed to help other GOP candidates who voted to impeach Trump.

Although Kinzinger decried both Democrats and Republicans in his pre-recorded remarks Friday for appealing to their parties’ “most motivated and extreme elements,” he appeared to allude specifically to Trump’s style of politics and the divisions fomented by the former president’s election falsehoods.

“We’ve allowed leaders to reach power, selling the false premise that strength comes from degrading others and dehumanizing those that look, act or think differently than we do,” he said. “As a country, we’ve fallen for those lies. And now, we face a poisoned country filled with outrage blinding our ability to achieve real strength.”

The other eight pro-impeachment Republicans have varied reelection prospects. Cheney has a challenger endorsed by the former president. Rep. Tom Rice of South Carolina has a well-funded opponent. Reps. Jaime Herrera Beutler and Dan Newhouse of Washington and Rep. David Valadao of California live in states with all-party primaries that could boost their odds.

Reps. Peter Meijer and Fred Upton of Michigan and John Katko of New York all reside in states that have yet to conclude their redistricting process.

Kinzinger, first elected in 2010, is a former Air Force pilot who leaned heavily on his military background in his initial campaign. And he is no stranger to unfavorable redistricting. A decade ago he was drawn in with Republican Rep. Don Manzullo, who was twice his age and had previously represented more of the current territory. Kinzinger beat Manzullo in a primary, anyway, 54 percent to 46 percent.

While his retirement serves as a further sign to Republicans that there is less room in the GOP for those who have chosen to break with Trump, even out of office, Kinzinger says he isn’t done just yet. And he has not ruled out bids for other, higher offices, including governor seat, Senate or potentially beyond.

“I want to make clear: This isn’t the end of my political future, but the beginning,” he said in the video.