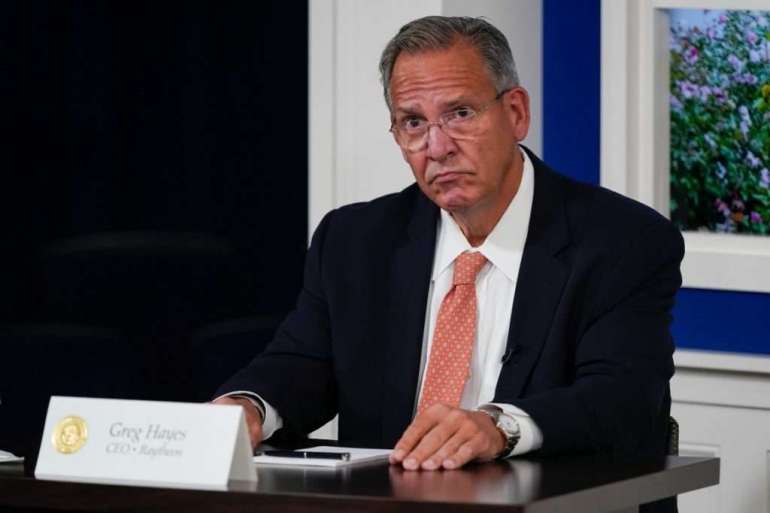 There are already indications that major programs could feel the impact of the loss of skilled workers. The CEO of Raytheon predicted this week he could lose “thousands” of workers who would leave rather than get the vaccine.

“Even a couple of welders or engineers who walk off their jobs on a highly classified program could wreak havoc with our national security,” said William Greenwalt, former deputy undersecretary for industrial policy in the George W. Bush administration. “There are many times we are only one person deep in the industrial base and it may take a decade or more to train up someone new.”

At the Bath Iron Works shipyard in Maine, owned by General Dynamics, up to 1,000 workers, or 30 percent of the workforce, could walk off the job rather than get the shot, officials at Machinists Union Local S6 have estimated. Six Arleigh Burke-class destroyers, the backbone of the Navy’s surface fleet, are in various stages of construction in the yard.

Some employees of Bell, which is competing for the Army’s next-generation helicopter, have already protested the mandates in front of the company’s Amarillo headquarters. Demonstrations have also sprung up at General Dynamics’ plant in Lima, Ohio, which builds Abrams tanks, and at Ingalls Shipbuilding in Pascagoula, Miss., owned by the nation’s largest shipbuilder, Huntington Ingalls Industries. The company builds and maintains the nation’s aircraft carriers and amphibious ships, and co-produces the Navy’s nuclear submarines and destroyers.

In a blunt video statement to her workforce on Monday, Newport News Shipbuilding President Jennifer Boykin cautioned, “I don’t want you to hold out hope that we will reverse this policy or extend the deadlines, we simply cannot,” adding that “if you have made the decision not to get vaccinated and to choose a new path that better aligns with your values and beliefs, my only request is that you become fully informed of what that means for you and your family.”

Some anti-vax employees of defense firms have started to organize. Over 200 workers at Bell, and more than 130 from Lockheed Martin, are working with an Arlington, Texas-based lawyer to have their vaccination exemption requests honored. The attorney representing them, Warren Norred, said Bell has not responded to his letter, while Lockheed has acknowledged the request.

Norred told POLITICO that his argument to the companies is that an employee signing a letter asking for an exemption from the mandate has already risked their job. “If I put my name on an exemption letter then I have already demonstrated good faith,” in holding a reasonable objection, he said. “There are valid reasons for reasonable people to not want to take this vaccine.”

Lockheed Martin responded to the complaint saying the company is “taking necessary steps to ensure a smooth implementation, including providing a system for employees to upload their proof of vaccination, get vaccinated and access a standard accommodations process for individuals unable to get vaccinated because their health status or sincerely held religious belief prevents it.”

Bell replied that it “cannot comment on litigation matters.”

Norred said he thinks the companies will want to find a solution. “This is all political and I understand the big firms just want to sell their stuff, and they want to sell stuff by doing what the boss wants, and the boss here is Biden.”

The Covid vaccine and subsequent booster shots are approved by the FDA and are required for defense companies to comply with federal guidance if they want to do business with the government. These vaccines went through all required stages of clinical trials, according to the Centers for Disease Control and Prevention.

A senior leader at Collins Aerospace Mission Systems, who asked not to be named, said the waivers are written in a way that make them a “soft firing” for certain skill sets. An employee who has to do the majority of their work in a classified environment, for example, is unable to go into the facility even if they are granted a waiver.

“We have proven that if you lose or misplace just a handful of the wrong people that things can back up for 10 years,” the Collins manager said. “For the strategic deterrent, for the big red button, the ability to keep that thing up and running you can’t stop for a month, let alone years.”

Yet Covid-related absences have and could continue to impact the workforce as well, and the companies are seeking to limit those absences and losses by enforcing the mandate.

Exacerbating the tension is that some in industry are unclear about what the administration expects them to do.

One executive who wished to remain anonymous said that up to this point, his Pentagon counterparts “haven’t really explained what they’re requiring of us, so we’re doing what we think is best while complying with the order.”

Contractors are huddling with their lawyers to determine how and where to enforce the rule, even while the White House coronavirus response coordinator suggested this week that those rules might be a little squishier than originally thought.

Federal contractors should “follow their standard HR processes and that for any of the probably relatively small percent of employees that are not in compliance, they’ll go through education, counseling, accommodations and then enforcement,” the White House’s Covid response coordinator, Jeff Zients, said Wednesday. “We’re creating flexibility within the system,” he added. “There is not a cliff here.”

That flexibility is leaving contractors feeling as though they’ve been left on their own.

The Pentagon “has not communicated a lot of guidance around when an exemption could be granted or should be granted,” said a senior defense official, who requested to speak anonymously in order to speak freely. “And I think we’re very much relying on industry to use their own judgment on granting exemptions. It is not the easiest thing, quite frankly, to understand.”

The Pentagon referred comment to the Office of Management and Budget. An official there acknowledged POLITICO’s request, but also didn’t offer a comment.

Speaking with reporters on Monday, Pentagon spokesperson John Kirby said “we are in close touch with our defense industry colleagues about this. We fully support the president’s mandate that the defense contractors are vaccinated so that they can continue to do the work they need to do.”

“The administration should have put a little more thought into implementation,” Greenwalt, the former Pentagon official said. “And considered the potential consequences of a rigid government-contractor-only mandate and designed a more flexible approach.”

Raytheon Technologies CEO Greg Hayes was the first of the top five defense primes to comment on Biden’s vaccine mandate, and characterized the policy as strengthening the company’s outlook in the fourth quarter of 2021. Yet he also said this week he expects to lose “thousands” of employees because of the order.

The supply chain problem is twofold, Hayes said Tuesday during a third quarter earnings call. “People are a piece of it, but I will tell you, there’s also raw materials,” he said.

During earnings calls this week, CEOs across the defense industry warned that the supply chain disruptions roiling markets would likely impact their business, an unwelcome one-two punch if these companies also lose skilled workers.

On Capitol Hill, dozens of GOP lawmakers in recent weeks have asked the Biden administration to roll back the deadline or relax the executive order’s rules, even as the White House signals it will be more flexible in the enforcement than the original order suggested.

Ranking Armed Services Republican Jim Inhofe of Oklahoma fired off a letter to Defense Secretary Lloyd Austin last week urging him to halt the Pentagon mandate, while House Armed Services ranking member Mike Rogers of Alabama led a group of House Republicans in a letter to Biden and Austin asking for a relaxation of the mandate for defense contractors, arguing it would take the industry a significant amount of time to recover from the loss of skilled labor.

Despite the protests in front of factories and shipyards, and the letters from members of Congress, the impact of the Dec. 8 deadline won’t be known until after the drop-dead date.

“I think that the challenge is that until we get to December 8, it’s difficult for any company to know the full extent of potential impact to their employees,” the defense official said. “And so we’re negotiating the contract modifications, without knowing the full breadth of how that company or that contract might be implemented.”