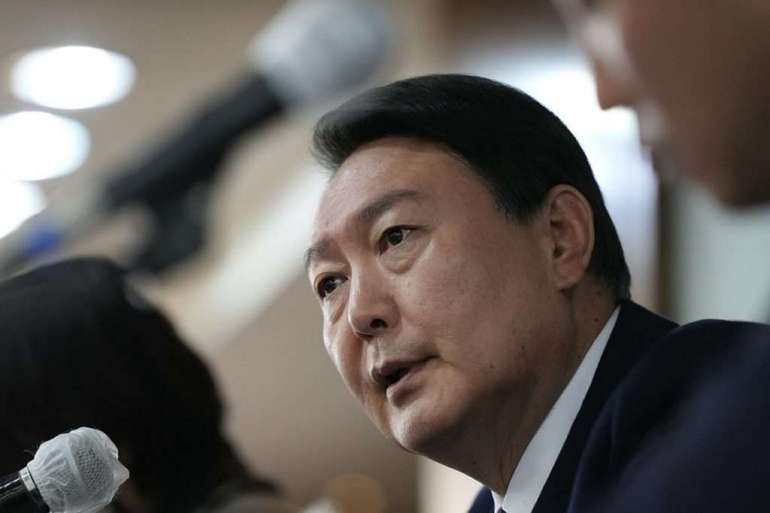 Meeting with foreign media on Friday, Yoon stressed the need to boost cooperation with Washington and Japan to make up for South Korea’s relative lack of ability to monitor North Korea’s advancing nuclear program.

“At a time when North Korea refuses denuclearization, bolsters its nuclear armaments and continues provocative missile tests, it’s accepted as an obvious fact that we have to upgrade our sharing of reconnaissance and intelligence assets and military cooperation” with the U.S. and Japan, Yoon said.

South Korea and Japan are both key U.S. allies in East Asia and host a total of about 80,000 American troops. But their three-way cooperation has been tested in recent years over history and trade disputes between Seoul and Tokyo stemming largely from Japan’s 1910-45 colonization of the Korean Peninsula. Moon’s government once threatened to terminate a trilateral intelligence-sharing agreement amid wrangling with Japan.

Stressing the need to improve ties with Tokyo, Yoon accused the Moon government of using tensions with Japan for domestic political gain. He said foreign policy should be implemented with pragmatism that prioritizes national interests over other matters.

Policies for pursuing North Korea’s denuclearization are likely be a leading issue in the March 9 election after Moon’s appeasement approach failed to convince the North to abandon its nuclear program, though it led to a temporary conciliatory mood between the rivals.

Lee has said he would follow an approach similar to Moon’s, and would seek exemptions from international sanctions on North Korea to allow a resumption of dormant joint cooperation projects. Yoon accused Moon of neglecting North Korean threats and said he would seek a stronger U.S. defense commitment to neutralize the North’s nuclear and missile threats.

Nuclear diplomacy between the U.S. and North Korea has been largely deadlocked since early 2019. North Korea isn’t a top priority for President Joe Biden, who faces challenges from China and Russia and mounting domestic issues.

Yoon said he would encourage the Biden administration to consider North Korea a leading priority. To do so, he said he would push strongly for North Korea’s denuclearization and present a concrete roadmap to achieve that.

Yoon’s stance could draw an angry response from North Korea, which has called previous South Korean conservative governments U.S. puppets, and avoided serious negotiations with them over its nuclear program.