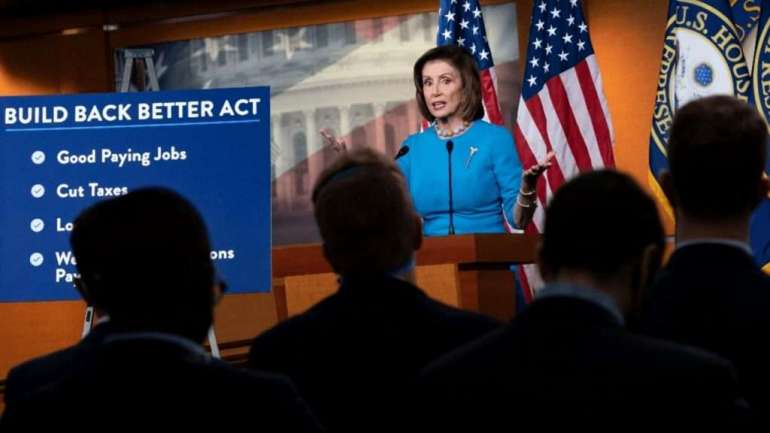 “Everything’s in place, we just need a score. We’ve exhausted debate for months here about the bill. I think it’s been vetted from A to Z,” he said.

Speaker Nancy Pelosi and other top Democrats are anxiously awaiting two key elements — the final nonpartisan cost analysis for the package and a guarantee from the Senate parliamentarian that, under the upper chamber’s rules, the bill can pass on a simple majority vote.

The CBO said midday Thursday it would finish its cost estimates for the bill later in the afternoon, clearing one significant hurdle as Democratic leaders push toward the vote.

Pelosi was optimistic, telling reporters she hoped everything still outstanding would be finished in the coming hours. That would allow the House to move quickly to vote on the rules governing debate for the roughly $1.75 trillion package, then on final passage, she said.

But other Democrats were privately much more pessimistic on the timing. They noted that while the Congressional Budget Office has made significant progress on its analysis of the bill, the unfinished “privilege scrub,” which ensures Democrats wouldn’t have to worry about a Senate filibuster, is much more worrisome.

The Senate’s parliamentary scrub of the House’s bill is ongoing, and Democrats in the upper chamber still hope to finish it by the end of the week. The work is critical to the bill’s passage: it ensures no Senate Republican votes are required.

“The ‘privilege’ can actually bring down the bill,” said Rep. Pramila Jayapal (D-Wash.), who has been deeply involved in discussions as chair of the Congressional Progressives Caucus. “If you take a bill to the Senate, and there are things that violate privilege, then the entire bill could be sent back.”

Even as lawmakers impatiently await details on vote timing — many have planned trips either out of the country or weekend fundraising events before Thanksgiving — Democrats have seen decidedly low drama this week compared to the months of tense standoffs between the party’s progressive and centrist wings.

Instead, much of lawmakers’ attention this week was focused elsewhere, primarily on Democrats’ successful effort to censure Rep. Paul Gosar (R-Ariz.) for a cartoon video he posted that depicted him killing Rep. Alexandria Ocasio-Cortez (D-N.Y.).

But Democrats are now eager for a different set of headlines. This week’s pivotal vote on Biden’s plan to expand the safety net, which caps eight months of infighting, is a fresh chance for party leaders to promote a bill they see as broadly popular.

Despite centrists refusing to back the bill just two weeks ago amid outstanding cost questions, Democratic leaders now feel comfortable they have the votes to muscle the package through the House, even with the party’s razor-thin three vote margin and no expected Republican support.

A group of those centrists have signaled they will support the legislation’s passage if the nonpartisan Congressional Budget Office’s analysis of the bill lines up with the White House’s estimate.

“If the scores match up, that’d be the case,” said Rep. Kurt Schrader (D-Ore.), one of those moderates, when asked if he would be willing to vote Thursday once final estimates were released.

Between that and the final cost of the bill being tallied, senior Democrats now believe they’ll win over enough of the holdouts. Still, the majority party expects to lose at least one vote: Rep. Jared Golden (D-Maine), who has continued to complain about some provisions in the bill, such as a tax break that would benefit the wealthy.

Republicans have homed in on that provision — Democrats’ push to raise the cap on state and local tax deductions, known as SALT relief — as a potent political attack. While the effort will provide relief to the middle class in states with high property taxes, analysts say it will also be a significant tax cut for the wealthy, undercutting Democrats’ message of “making the rich pay their fair share.”

Democrats “see the writing on the wall and know this reconciliation bill to be the end of their Democratic majority,” House Minority Leader Kevin McCarthy said Thursday. He slammed the SALT deduction as “billions to the rich.”

The Congressional Budget Office has released its score of most titles in the massive bill already, but two key ones are still outstanding for the Ways and Means and Judiciary panels. One of those major analyses, the Energy and Commerce title, was released Thursday morning as Pelosi was speaking to reporters.

When the House does ultimately vote, it will be one of Congress’s largest bills in history: a roughly $1.75 trillion measure that touches everything from universal pre-K to health care subsidies for low-income Americans and initiatives to combat climate change. And it comes with high political stakes, with Democrats bear-hugging Biden’s agenda as they defend their perilously thin majority going into the midterms.

Democratic leaders aim to vote on the social spending bill by Friday at the latest, allowing members to start their Thanksgiving recess on schedule. But Pelosi has already warned her caucus that the House won’t leave without voting on the bill, foreshadowing the possibility of a rare weekend session if Democrats hit an unexpected speed bump and need more time to round up votes.

With a frenzy of holiday travel approaching, Pelosi and her leadership team are doing everything they can to speed things along. For instance, Democrats started debating the bill on the floor — which often takes hours — on Thursday morning, despite several outstanding issues that needed to be resolved before a final vote.

Still, some moderate Democrats are privately grumbling about the process. Some are still calling for the entire vote to be pushed back until after Thanksgiving, seeing little need to rush the bill when it’s unclear when the Senate would take it up.