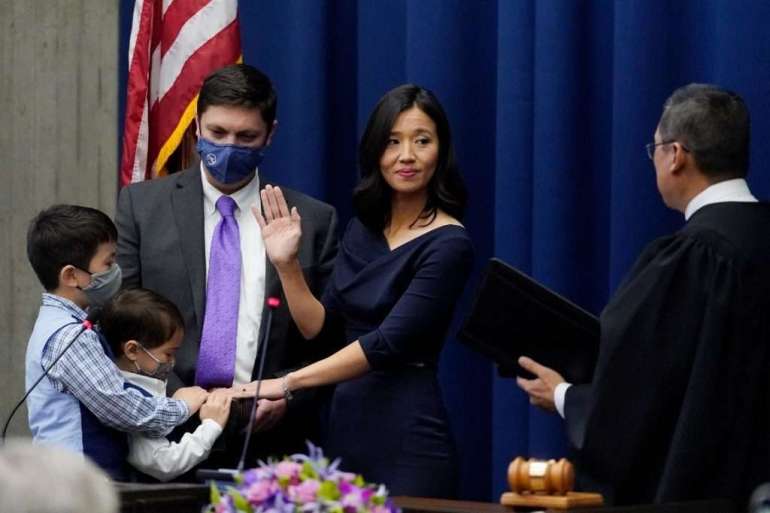 Dickens was no stranger to battling the virus by the time he took office in early January. He’d contracted a mild breakthrough case just a few days before Christmas.

By the time he was sworn in, Dickens had tested negative but infections were sweeping through city workers in Atlanta. He extended the citywide mask mandate for indoor public spaces signed by his predecessor, fellow Democrat Keisha Lance Bottoms, and is offering financial incentives to city employees to get vaccinated.

Dickens vowed in his inaugural address that his administration would be “laser-focused on reducing crime” in its first 100 days. He unveiled a new police precinct in Buckhead, a more affluent neighborhood where some residents are threatening to secede from Atlanta.

But the virus continues to challenge basic city services.

“I’m trying to make sure that we collect garbage, recycling, yard waste,” Dickens said. “But 196 sanitation department workers were out [earlier this month] with Covid.”

Parker, who took over as mayor of Fort Worth in June, battled a breakthrough case in October. She’s now fighting her second Covid surge in office — and is running into a wall of misinformation and distrust she says isn’t helped by mixed messaging from the Centers for Disease Control and Prevention on masks and isolation periods.

“It’s like you’re damned if you do, damned if you don’t,” Parker said in an interview. “I hope Americans in all of their respective cities can give mayors and elected officials some grace. … Many of us are trying to navigate different opinions from the federal government or state leadership.”

New mayors aren’t going through this trial by fire alone. Pureval teamed up with Bibb for a virtual joint press conference days after they both took office. Mayors have traded phone numbers at events and mingled with each other — and Biden — at the White House. And they’ve joined regular calls with other big-city mayors that, for nearly two years, have served as both an information hotline and a lifeline for city leaders isolated and overwhelmed in the pandemic’s darkest days.

“I feel for them,” Dan Pope, the third-term Republican mayor of Lubbock, Texas, said. “There’s nothing, I don’t believe, that can prepare you for the phone calls and emails that you get from scared constituents, moms and grandmothers that are concerned about their kids going to school.”