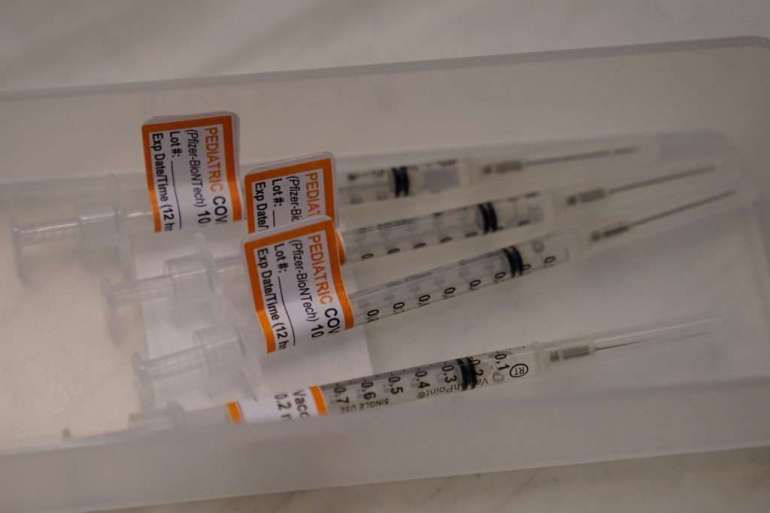 While many welcomed the new development, some pediatricians raised concerns that the companies were moving too quickly, before they had finished studying whether a third dose would provide the necessary protection to children.

The companies began a rolling submission process — at FDA’s request — asking the agency to authorize the first two 3-microgram doses while they continue to collect data on a third shot administered at least eight weeks after the second. That information will be submitted to regulators later this spring to support a potential emergency-use authorization expansion, they said.

Pfizer announced in December it would expand its pediatric trial to include a third dose for children under 5 after some children in the age group failed to mount adequate immune responses to two shots.

“As hospitalizations of children under 5 due to COVID-19 have soared, our mutual goal with the FDA is to prepare for future variant surges and provide parents with an option to help protect their children from this virus,” Pfizer CEO Albert Bourla said in a statement. “Ultimately, we believe that three doses of the vaccine will be needed for children 6 months through 4 years of age to achieve high levels of protection against current and potential future variants. If two doses are authorized, parents will have the opportunity to begin a COVID-19 vaccination series for their children while awaiting potential authorization of a third dose.”

Former FDA Commissioner Scott Gottlieb, who now serves on Pfizer’s board, suggested an authorization request for two doses was imminent during an appearance on CBS News Sunday. The Washington Post first reported the request was expected this week.

Former FDA Deputy Commissioner Anand Shah said the development is a product of the agency’s close collaboration with industry to fight the pandemic.

“This is a great example of FDA working with Covid medical product developers proactively to address the sharp increase in infections among children,” he said.

The American Academy of Pediatrics said it was “encouraged” by the prospect of a Covid vaccine for the youngest children getting one step closer to reality, noting that cases among those under 18 have spiked as the Omicron variant became the dominant strain domestically.

But other pediatricians signaled concern about the prospect of considering an EUA request based on, at least for some ages, shaky data while the companies continue testing additional doses.

“That doesn’t make sense,” said Paul Offit, director of the Vaccine Education Center at the Children’s Hospital of Philadelphia.

Pfizer executives acknowledged in December that a Covid vaccine for children under 5 may not be ready until the middle of 2022 after clinical trial data showed the vaccine generated an immune response comparable to young adults in children 6 to 24 months old, but not for those between 2 and 5 years old.

Data on the effectiveness of a third vaccine dose is expected by late March.

That decision “reflects the companies’ commitment to carefully select the right dose to maximize the risk-benefit profile,” Pfizer and BioNTech said in a Dec. 17 statement.

The balance of risks and benefits to children has dominated federal health advisers’ discussions around immunizing that population against Covid, especially as myocarditis, a rare but notable side effect of the messenger RNA vaccines, was identified most commonly among teenage and young adult males.

Pfizer and BioNTech’s approach would hinge on the two-dose vaccine’s risks appearing to be low to older toddlers — but with undefined benefits.

Cody Meissner, a pediatrics professor at Tufts University School of Medicine who serves on FDA’s vaccine advisory panel, said federal regulators need to consider the relatively low risk Covid presents for children against the rare but possible side effects.

Children under 5 represent 3 percent of total U.S. Covid cases, but that age group has seen higher hospitalization rates for the virus compared to older children, according to CDC data, especially as Omicron surged in January.

The Pfizer-BioNTech vaccine for 5- to 11-year-olds first became available in November, opening up immunizations for some 28 million children. As of Jan. 31, 8.7 million kids in that age group had received at least one dose, less than a third of those eligible.

Current estimates suggest about 90 percent of the population has some level of immunity to Covid, either from vaccination, natural infection or a combination, Offit said. But people under 30 are the least likely to have been immunized or infected, he said, noting expectations that the virus will circulate for years to come.

“I think you are vaccinating children for when they become adults, or adolescents and adults,” he said. “This pandemic is not one and done. We’re going to be dealing with this virus for a while.”

Still, Offit said he was frustrated by news of pharmaceutical companies’ Covid-related submissions leaking before the data behind them is publicized.

“I just really wish the companies would stop acting like public health agencies,” he said.