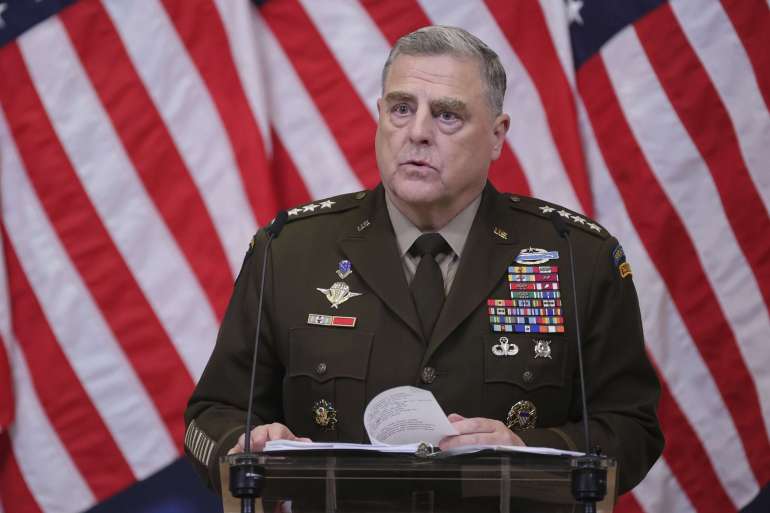 The general has spoken regularly with his Ukrainian counterpart, Gen. Valeriy Zaluzhnyy, including on Monday, according to a U.S. official. During the discussion, Zaluzhnyy did not express any concern or mention Milley’s comments even once, the person said. The person, along with others interviewed for this story, spoke on condition of anonymity in order to discuss internal deliberations.

Still, the flurry of calls and meetings with Ukrainians underscores the degree to which the administration is concerned about presenting a unified front on Ukraine and potential peace talks. Any prolonged public split among top U.S. officials could threaten the already delicate relationship between Washington and Kyiv at a key moment in the war.

The Biden administration needs to ease those tensions as it balances its support for Ukraine with concerns that Western stockpiles of military equipment are running low, and the possibility of a Republican-controlled House next year that will slash aid for Kyiv. European leaders are growing anxious about the region’s energy crisis, with some raising questions with American counterparts in recent days about the extent to which talks could ease fears about rising costs.

The administration has been careful to signal that peace talks aren’t currently on the table. Shortly after Russian media reported that CIA Director William Burns met his Russian counterpart in Turkey Monday, a White House spokesperson insisted the gathering was for non-diplomatic purposes.

“He is not conducting negotiations of any kind. He is not discussing settlement of the war in Ukraine. He is conveying a message on the consequences of the use of nuclear weapons by Russia, and the risks of escalation to strategic stability,” the White House said in a statement, adding that Burns “will also raise the cases of unjustly detained U.S. citizens.”

Ukrainian officials were briefed about the trip ahead of time, per the spokesperson.

The mixed messages in public and in private about whether the U.S. should begin to speak more seriously with Ukraine about peace talks with Russia are straining the Washington-Kyiv relationship, according to eight U.S. officials. While some top national security officials are adamant that now is not the time to begin discussing negotiations, especially after Kyiv retook a strategically important city last week, others believe the winter could provide an opportunity for diplomatic conversations to take place.

These officials are pushing their counterparts in Washington to more seriously consider an upcoming break in fighting as a diplomatic opening — but their recommendations have not yet altered the views of President Joe Biden or his most senior staff, according to three U.S. and Ukrainian officials.

Some military experts disagreed with Milley’s assessment. Winter weather will slow but not halt the fighting, and Ukrainian forces will keep the pressure on ill-equipped Russian troops, said retired Lt. Gen. Ben Hodges, the former commander of U.S. Army Europe.

By January, Ukrainian forces will be in position to begin an advance on Crimea, Hodges said — and he anticipates they will have expelled all Russian troops from their territory by the summer.

“People should get their heads around the idea that Ukraine is going to defeat Russia on the battlefield, the old fashioned way. They have irreversible momentum,” he said. “Now is the time to put the pedal to the metal.”

The debate within the administration took off last week after Milley, who also strayed from White House talking points in the previous administration, shared his assessment that neither Ukraine nor Russia can win militarily.

Both sides need to reach a “mutual recognition” that a military victory “is maybe not achievable through military means, and therefore you need to turn to other means,” Milley said, adding that the potential stalemate provides “an opportunity here, a window of opportunity for negotiation.”

Milley’s remarks did not mean that he believes Ukraine should capitulate or cede any part of its sovereign territory to Russia, the second U.S. official said.

But the comments echoed a broad sense inside the Defense Department that the coming winter provides a chance to discuss reaching a political settlement to end the war. Senior military officials believe Ukraine will be challenged to expel Russian forces from all occupied areas, as is Kyiv’s stated end goal. That’s especially the case in the Crimean peninsula, which has been held by Russia since 2014.

“It’s very difficult to unseat a military that’s in a defense, as the Russians found out,” the second official said. “It’s going to be very, very costly and difficult to kick the Russians out, costly in terms of resources and lives. Can it be done remains to be seen.”

When asked to comment for this story, a DoD spokesperson pointed to remarks by Pentagon spokesperson Sabrina Singh on Friday that she would let Milley’s comments “speak for themselves.”

“The president has said, the secretary has said that the way we see the end to this war is through diplomatic conversations. But again, we’re not seeing that the Russians are willing to let up, and frankly, continue to see their aggression on the battlefield and in cities all across Ukraine,” Singh said.

Kyiv believes its forces have momentum now after retaking the southern city of Kherson, a key Black Sea port and gateway to Crimea, last week. Russian forces retreated across the Dnipro River on Thursday, consolidating on the opposite bank.

But Defense Department officials say the Kherson region is an example of the tough fighting that lies ahead. Fighting across the river to try to retake territory on the opposite bank is a difficult military maneuver.

“Why not start talking about [peace talks] before you throw another 100,000 lives into the abyss?” the second U.S. official said.

The State Department, meanwhile, is laying the groundwork for eventual peace talks between Ukraine and Russia, a third U.S. official said without offering details. The administration stresses it would only engage in such conversations alongside and in full consultation with their partners in Kyiv.

The National Security Council is the most resistant to the idea of talks, despite a smattering of aides who privately urge the U.S. to get Ukraine and Russia to the table. National security adviser Jake Sullivan has occasionally agreed with their view on prioritizing Ukraine-Russia talks — which is not conveyed directly to the Ukrainians — but argues Russian President Vladimir Putin wouldn’t take negotiations seriously at this time and that the Ukrainian public would reject any efforts at dealmaking.

“As long as Russia holds the position that it simply gets to grab as much territory as it wants by force, it’s hard to see them as a good-faith counterparty in a negotiation,” Sullivan told reporters last Saturday. A senior administration official said “everyone in the room is in the same mindset.”

Yet speculation swirls within the Biden administration that the NSC’s resistance to peace talks calcified only after Milley’s remarks sparked an uproar in Kyiv.

“What White House officials are willing to say publicly and what they think privately are not necessarily the same,” said a fourth U.S. official. “Milley is much more willing to just say what he thinks. I’m sure they sometimes wish he wouldn’t always say the quiet part out loud.”

Another person familiar with the situation said the matter “is a live discussion in the White House.”

Whatever the reason, as of now there’s no concrete diplomatic push to organize talks afoot, said an administration official. “There are not any planning venues, papers, negotiating strategies,” the official said, resisting the idea that there is a quiet effort to set the table for future talks.

The mixed messages from Washington come at an inopportune time for Ukraine, with a brutal winter approaching.

Russia is pounding civilian infrastructure, terrorizing the Ukrainian public by cutting off electricity, heat, clean water and access to other essentials. The Ukrainian military found the recently liberated regional capital of Kherson struggling to fulfill basic services after months of Russian occupation.

“Before fleeing from Kherson, the occupiers destroyed all the critical infrastructure: communications, water, heat, electricity,” Ukrainian President Volodymyr Zelenskyy said in a Saturday video address. Kyiv is now rushing food, water and medicine to the 75,000 or so people remaining in the southern city.

Western military officials are also rushing to figure out new ways to get Ukraine the weapons it needs, particularly ammunition and air defenses to protect civilian infrastructure, as stockpiles run low. The U.S. announced last week that it would provide Ukraine with four Avenger air defense systems, a mobile, short-range weapon used in the Iraq war, along with paying to refurbish old Hawk missiles and Soviet-era tanks from the Czech Republic.

DoD will also buy ammunition from the South Korean defense industry to transfer to Ukraine, according to a DoD official. The Wall Street Journal first reported the news.

There’s also widespread concern in Kyiv that a Republican-led House will mean less aid to rebuild places such as Kherson. The U.S. has already given billions of dollars in such assistance to Ukraine, but more funds will be crucial in the coming months and years for reconstruction efforts.

Biden expressed confidence last week that the aid would continue to flow even with Republicans in charge of Congress’ lower chamber. But it’s possible increased calls for Ukraine-Russia talks from U.S. officials might scare Ukrainians into thinking Washington isn’t in it for the long haul.

Nahal Toosi and Paul McLeary contributed to this report.