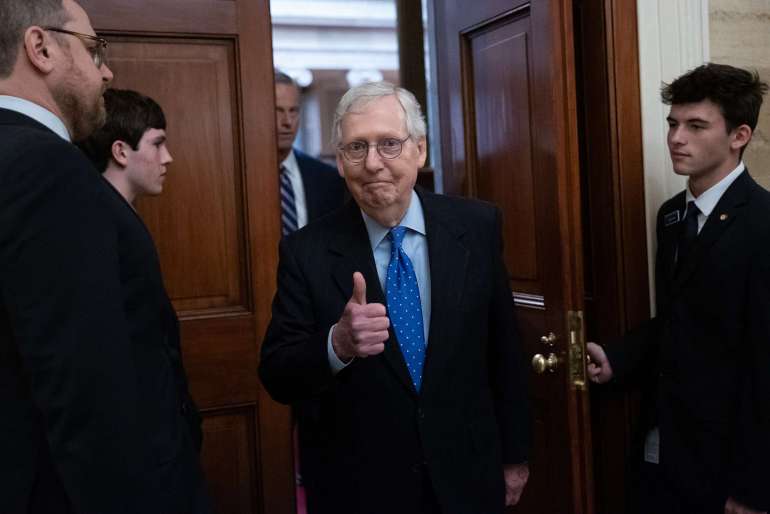 But it was clear after a marathon three-and-a-half hour meeting that McConnell critics make up a decided minority of the Senate Republican Conference.

“I’m not in any way offended by having an opponent or by having a few votes in opposition,” McConnell told reporters. Asked if this might be his last term, though, he responded forcefully: “Look, I’m not going anywhere.”

Scott said afterward that the vote “marks the beginning of a new era in the Senate Republican Conference.” Yet McConnell was quick to defend how he leads the conference after defeating Scott’s challenge, noting his members meet thrice a week and a small group of senators can call a conference meeting. He said “there’s nothing to negotiate” with regard to how the Senate GOP operates.

In a statement literally sent during the meeting, Scott trashed the last National Republican Senatorial Committee, led by Sen. Todd Young (R-Ind.), for distributing “hundreds of thousands of dollars in unauthorized and improper bonuses” to staff. That followed complaints by GOP senators this week about how Scott ran the NRSC this cycle.

McConnell had next to nothing to say about Scott, the confrontational campaign arm chair who became the face of the anti-McConnell vote.

“I don’t intend to assess the performance at all,” McConnell said of Scott’s management of the NRSC. Incoming Chair Steve Daines (R-Mont.) said there were “lessons learned” from the party’s approach over the last two years.

Some Senate Republicans had pushed for delaying the leadership elections, but that vote failed, 16-32, on Wednesday morning, paving the way for McConnell’s reelection. That marked a higher appetite for delaying the elections than for ousting McConnell, a vote that carries profound political weight that could resonate for years.

Though Republicans spoke of a united front after the leadership election, it hasn’t been a pretty week. Altogether, Senate Republicans spent nearly seven hours on Tuesday and Wednesday griping about everything under the sun: A whiffed midterm cycle, the lack of an agenda, Scott’s perceived mismanagement of the National Republican Senatorial Committee and McConnell’s stewardship of the caucus.

The hope among Republicans is that patching up the party’s internal divides this week will allow the party to unite heading into Herschel Walker’s runoff race against Sen. Raphael Warnock (D-Ga.).

“We all know we need each other. It’s a place that burning bridges costs too much. It was very, very well done and professional,” said Sen. Kevin Cramer (R-N.D.), describing the Wednesday meeting. “It was all forward looking.”

Though McConnell and his top two deputies, Minority Whip John Thune (R-S.D.) and Conference Chair John Barrasso (R-Wyo.) are staying put, there was movement Wednesday in the rest of the leadership ranks. Sen. Joni Ernst (R-Iowa.) is now the No. 4 Senate Republican, chairing the party’s policy committee, and Sen. Shelley Moore Capito (R-W.Va.) is the vice-chair of the conference, the No. 5 position.

“I’m glad that we had about eight hours over the last two days to engage in a detailed discussion about how we use all the legislative tools we have to stop the policies of the Democrats,” Cruz told reporters afterward.

Sen. Marco Rubio of Florida, who sought to delay the election, wouldn’t say how he voted. Neither would Sen. Rand Paul (R-Ky.) or Rep. Markwayne Mullin of Oklahoma, who just won a Senate seat.

“I’m not saying how I voted, because [now] we’re all together,” Mullin said.

One element of particular frustration among Senate Republicans over the past two years is how a small group of senators, sometimes in leadership, devise bipartisan bills outside the committee process. It’s a dynamic that’s led to a series of bipartisan laws on infrastructure, gun safety and microchip manufacturing — frustrating corners of the conference that think those efforts showed too much deference to Democrats.

“There’s an appetite for better communication and more collaboration and more input,” said Sen. John Cornyn (R-Texas), an ally of McConnell’s who helped write the gun safety bill. He and Braun were designated as the vote counters in Wednesday’s secret ballot election.

The next few months will test just how the Senate GOP handles being in the minority for two more years. Former President Donald Trump officially started his 2024 run Tuesday night and publicly loathes McConnell, who said he’s “going to stay out” of the primary process. The Republican leader said he’s open to compromise with President Joe Biden on legislation moving forward “but it’s going to have to be in the political center.”

And the party needs to adjust its strategy to promote more electable candidates in battleground states. There’s a fertile Senate map for the GOP in 2024, but Republicans learned this cycle that they need more than a favorable environment and embattled Democratic incumbents.

“We underperformed among voters who did not like President Biden, and among independents and among moderate Republicans who looked at us and concluded: Too much chaos, and too much negativity. We turned off centrist voters,” McConnell said. “We have a problem with people in the middle.”

CORRECTION: Due to an editing error, a previous version of this report misstated how Sen. Rand Paul (R-Ky.) voted in the election for GOP leader.