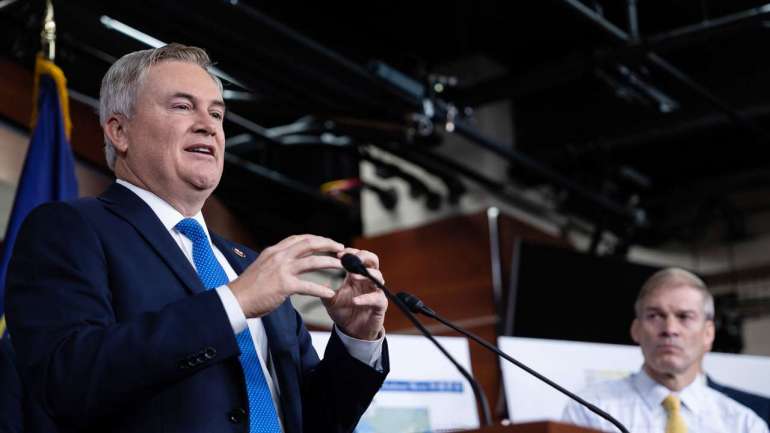 Greene is aiming for a seat on the Oversight Committee, which would give her a high-profile foothold into the party’s investigative strategy. Republicans have no shortage of targets, including Hunter Biden, a coronavirus “origins” probe, the withdrawal from Afghanistan, the FBI and Justice Department and the administration’s handling of the border.

And during a closed-door conference meeting this week, leadership hopefuls fielded questions from conservative members about investigating Jan. 6 security — which GOP lawmakers have tried to lay at the feet of Speaker Nancy Pelosi — as well as the treatment of those jailed for participating in the riot at the Capitol. (Pelosi has repeatedly said she does not get involved in day-to-day security operations.)

Asked about the possibility of the two investigations in a GOP-controlled House next year, Rep. Matt Gaetz (R-Fla.), a member of the Judiciary Committee, said: “Hope springs eternal in the new Congress that we’ll be able to get a lot of these questions answered.”

Some, like Gaetz, have floated revamping the Jan. 6 select committee to probe the current Democratic-led panel that’s investigating the actions by Trump and those in his orbit to overturn the 2020 election results. But other incoming chairs have signaled that they largely expect questions about Jan. 6 and Capitol security to fall under the Administration Committee, which is likely to be led by Rep. Bryan Steil (R-Wis.) next year.

Meanwhile, more than a dozen House Republicans, led by Comer, publicly rolled out their long-touted probe into Hunter Biden by making it clear that their real target is his father, President Joe Biden.

Comer and others haven’t been shy about their efforts being a probe in search of a problem — a hunt for a smoking gun that would provide a still-unproven direct link between Joe Biden’s decisions as vice president or president and his son’s business dealings. But the public rollout of those plans, one day after Republicans officially won the House in the midterm elections, shows where a GOP facing partisan gridlock will focus much of its attention for the next two years.

“I want to be clear: This is an investigation of Joe Biden, and that’s where the committee will focus in the next Congress. … We’re trying to stay focused on: ‘Was Joe Biden directly involved with Hunter Biden’s business deals’ and ‘was he compromised,’” Comer said on Thursday.

It’s a far cry from the days of the Benghazi select committee, when McCarthy earned the public’s ire for depicting an inquiry into an attack on U.S. officials in Libya as a way to wound Democratic presidential contender Hillary Clinton. And it’s revisiting some well-trodden ground: a pair of Senate Republicans released a report on Hunter Biden and other family members weeks before the 2020 election, when Joe Biden was the party’s nominee.

Congressional Democrats and Biden’s allies are preparing to go on defense — with the DNC circulating a memo on Comer Thursday calling him a “conspiracy theorist, Trump sycophant, [and] proven liar” — while also predicting that an investigation will backfire with swing voters in the 2024 election, as Biden flirts with a second run.

With much of House Republicans’ legislative agenda already in limbo due to Democrats winning the Senate and Biden in the White House, their investigative plans are expected to take center stage next year. Democrats have pointed to Jordan’s comments earlier this year that investigations will help “frame up” the 2024 presidential election as evidence that GOP probes and their political ambitions are inextricably tied together.

“Instead of working with President Biden to address issues important to the American people, like lower costs, congressional Republicans’ top priority is to go after President Biden with politically-motivated attacks chock full of long-debunked conspiracy theories,” said Ian Sams, a spokesperson for the White House counsel’s office.