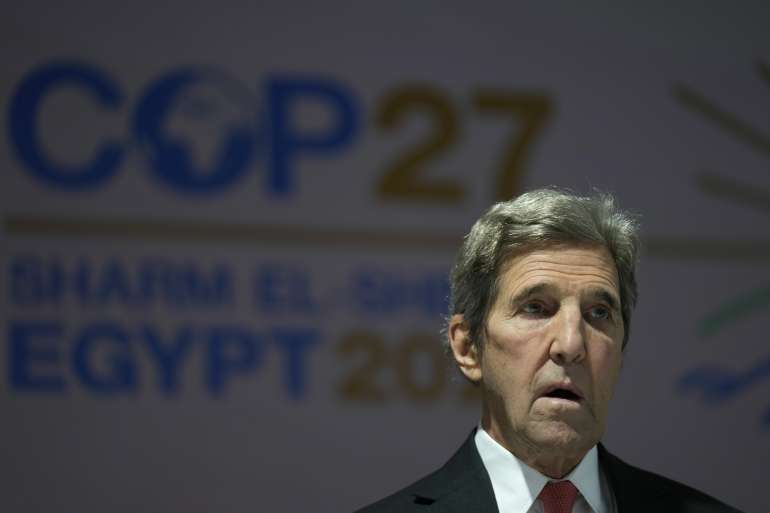 “The U.S. might end up being isolated from the entire conversation, and therefore has no other choice but to come on board,” Tuvalu Finance Minister Seve Paeniu told reporters Friday.

The EU proposal also calls for China to play a role in contributing money to a fund to offset climate damages — a condition the country that is now by the far the biggest greenhouse gas emitter may find untenable.

Some within the EU see that gambit to bring Beijing into the “loss and damage” proposal as an opening for the U.S., which wants China and other countries like Saudi Arabia and Qatar, to pay into any possible fund.

“We would like to see the U.S. moving toward our direction,” Spanish Minister for Ecological Transition and Demographic Challenge Teresa Ribera told POLITICO. “Politically and geopolitically, I think that the good thing to do from the U.S. side is also to join.”

The U.S. has long resisted the idea of a loss and damage fund that could be accessed by countries suffering from rising seas, intense droughts and brutal storms that are growing worse because of climate change. It fears endless lawsuits from lower-income nations seeking restitution for harm from all the planet-heating gases it has put into the atmosphere since 1850. While the U.S. displayed new openness to discussing a fund this year, it has not backed the idea.

Kerry has said the U.S. is weighing an array of possibilities, but has not landed on a specific option. He told POLITICO on Wednesday that the U.S. supports a resolution on a loss and damage plan by no later than 2024, a timeline laid out in the agenda for this year’s talks.

EU climate envoy Frans Timmermans offered what he framed as a compromise offer that would allow loss and damage funding from “a broad donor base” with a “mosaic of solutions,” like levies on international aviation, shipping and fossil fuels.

And it was one that might hold broader political ramifications by driving a wedge between China and the less developed climate-vulnerable nations that Beijing has long sought to associate itself with at the climate talks.

Delegates from the U.S., traditionally the strongest opponent of finance for climate repairs, were surprisingly silent on the EU announcement and did not speak in the Thursday session where Timmermans unveiled the plan.

They were “not amused, I understand,” said one EU official, who spoke on condition of anonymity. Asked whether the U.S. could support their proposal, Timmermans said: “I don’t know at this stage.”

But the U.S. is not the only country feeling sour. India’s proposal to phase down oil and gas, which was backed by the U.S., EU and climate-vulnerable nations, did not appear in the conference’s draft agreement text released Friday morning. Some environmental groups said the language also weakened a commitment made at last year’s talks in Glasgow, Scotland, calling for nations to phase out fossil fuel subsidies.

“There can be no equivocation. There can be no mincing of words. There can be no sleight of hand with language, no fuzzy-wuzziness,” John Beard, president of the Port Arthur (Texas) Community Action Network, an environmental activist group, said at a Friday press conference.

The Egyptian government hosting the talks blamed stalled progress that is expected to push the conference into overtime on developed countries, which it said had failed to pledge as much support to various climate funds as they did last year.

“It doesn’t help,” said a senior Egyptian official, adding that the “mood in the room” had continually returned to financial issues.

The draft text called on countries to create a “roadmap” for doubling finance that developed countries contribute for adaptation, which helps countries steel themselves against the effects of climate change, by 2025. That doubling would bring the total annual figure to $40 billion.

But developing nations have accused wealthy ones of putting forward too little money. They are also skeptical that promises of private sector funding will materialize for adaptation, which has historically attracted little interest from corporations.

Countries hope to address some of those funding flows through changes to international financial institutions like the World Bank and International Monetary Fund. The draft text asks those banks to “significantly increase climate ambition” and align their finance with Paris Climate Agreement targets.

The text encouraged shareholders at those banks to “define a new vision” and “operational model, channels and instruments” to address climate change, including a call to take on more risk to increase climate finance threefold by 2025.

Those suggestions align with recommendations from the Bridgetown Initiative, led by Barbados Prime Minister Mia Mottley, and build on broader calls for reform by U.S. Treasury Secretary Janet Yellen and others. They have criticized the banks for being too risk averse and not able to meet global collective challenges like climate change.