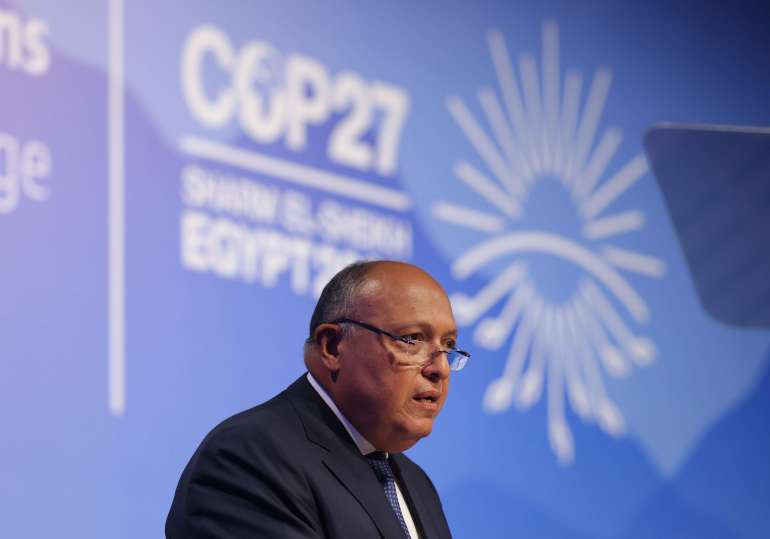 Organizers and delegates gave no hint of when the talks might conclude.

Final drafts of the texts, seen by POLITICO, showed that the deal on the damage fund remained intact despite a rough-and-tumble last few hours after an adverb describing vulnerable countries was changed from “particularly” to “especially.” Negotiators said the summit’s Egyptian presidency blamed the change on a typo.

Another part of the deal under negotiation said a process aimed at encouraging ever-more-rapid cuts to pollution “will not impose new targets or goals.” That’s a line that Europeans had fought hard to delete.

European regulators had threatened to walk out of the talks Saturday if countries didn’t agree to make stronger commitments to cut their greenhouse gas pollution. European officials accused reigning oil producer Saudi Arabia and major coal burner China of trying to water down the deal.

Still, a pivotal point in the talks came Friday, when negotiators said the United States made a significant break from its past positions by agreeing to the creation of a fund that would pay developing countries for the damage they’re suffering from climate damage. Washington has long opposed such a fund for fear it would expose the U.S. to legal action for all the carbon it has pumped into the atmosphere during the past century and a half.

Seve Paeniu, finance minister of the Pacific island nation of Tuvalu, confirmed Saturday that a deal had been reached to create a fund for payments, one of the most contentious issues at the summit.

At the same time, U.S. negotiators have insisted that China — the world’s second-largest economy and current leader in greenhouse gas pollution — contribute to any such fund. China, pointing to a 1992 U.N. agreement classifying it as a developing country, has argued that it should receive payments instead.

The U.S. resistance to a climate fund has drawn steady criticism from delegates representing countries imperiled by climate change, even as President Joe Biden has sought to use the summit to reassert American leadership on the fight against global warming.

An EU official said the not-yet-final deal “decides to establish new funding arrangements for assisting developing countries that are particularly vulnerable to climate change in responding to loss and damage.”

The same official said a clause in the draft text that referred to “identifying and expanding sources of funding” was a vague reference to expanding the base of countries that would contribute to the fund. The EU will work next year to ensure that that reference applies to countries such as China and Saudi Arabia.

The talks in Egypt set the stage for more conclusive negotiations at the next U.N. climate summit, scheduled for late 2023 in the United Arab Emirates. Those talks will try to develop more details on the design of the new fund.

But with major aspects of the negotiations still ongoing in Sharm El-Sheikh, particularly on a program to encourage steeper cuts in greenhouse gas emissions, Egyptian Foreign Minister Sameh Shoukry, who is leading the talks, cautioned against banking any single aspect of the agreement.

“I don’t want to speculate or to prejudice the ongoing discussions and negotiations,” he said.

Sara Schonhardt contributed to this report.